Seeing Dragonette in Surrey for the ‘Biggest outdoor Canada Day Celebration in Western Canada’ was kind of weird.

To me, it seemed like a lot of the people were there for the fair rides, or decided with the family that it was a good day to go out and socialize at the outdoor party on this particular Thursday.

But, none-the-less, Dragonette made me smile the second they stepped onto the stage, until long after they left.

I have previously reviewed their latest album, Fixin To Thrill, here, which in my mind is absolutely killer.

The guests I brought with me to the free concert in Surrey hadn’t been introduced to Dragonette as of then; needless to say, they left fans.

The band came out, with the casual splendor a band getting big carries with them, exclaiming: “We’ll start as soon as Martina gets here.” I’m curious if they are starting or have always carried giant ego’s necessary for rock/pop stars… I waited patiently, which wasn’t long.

Martina’s singing was spot on for nearly the entire show, clearly showing that they were a professional well-trained band, which I was very happy to see. Some of the songs, some of the transitions and swings Martina must go through with her voice-box are truly magnificent, which is mainly the reason why I love this band so much. Her body movement on stage is what sets her and her band into a category all in its own. Yes, young pre-teen fellows were all around me, dropping their jaws. 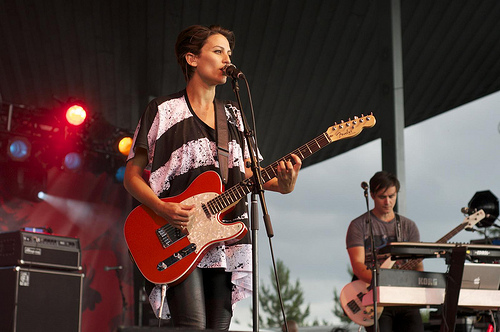 Martina mentioned at one point that they were going to do a world premier of a song, which was the only song that I didn’t feel she had down perfectly. I think she knew this, and was a bit nervous, which you could hear it in her voice, and see in her movements. Have you ever felt that feeling where you’re a little unsure, so you don’t put forth 100% because your nervous such effort would amplify your errors? The song did have a weird beat, and even weirder transitions, but did have a nice chorus. I am interested to hear it soon on their next album.

In all honesty though, this was the perfect venue to tackle a new song at, most of the people there probably hadn’t heard of her before. I’m happy somebody in the planning of Canada Day has though, it made my Canada Day a great one!

My only regret of the event was that I didn’t get myself a media pass so I could take photographs from sweet locations, they looked stunning up there. 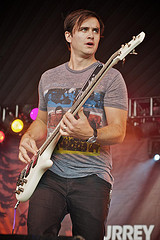