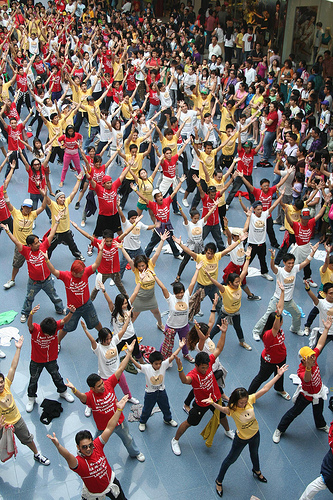 So, many of you may not know what a Flash Mob is. According to Wikipedia, they are “a group of people who assemble suddenly in a public place, perform an unusual and pointless act for a brief time, then disperse.”

Sounds kind of fun doesn’t it? I think so too. Although I’m sure it would take a considerable amount of time to prepare one of these things.

A friend of mine, Liser, just brought the light of these flash mobs back into my eyes when she told me about how riveting such a thing is. She said that the idea of so many people in one place, dancing and happy puts her “at peace with the world.”  I agreed with her when she mentioned that the energy is so positive, how can a gathering like that not be? Seems fun to me.

So, as a result, I have been watching a few videos on some examples. The first one Liser showed me was one where they all met in Central Station in Antwerp, Belgium and suddenly started dancing.

To me, it was pretty cool. The way that they just are all acting casual, going about their business, and then just like that, they’re all dancing. Kind of really rules!

The next one I watched was a supermarket one where they all froze.

So I read on the Wikipedia page about them further, since my interest was clearly in it, and it turns out that the originator of recent day flash mobs is a man called Wasik who started doing them to be as a kind of joke to the conformers of the world, showing them the absurdity of things, as well as have some fun. The first one I guess failed since they owner of the store they had planned on infiltrating was alerted about it. But, they did the next one only a short month later.

One funny event that I wish I would have been able to see is when there was 200 of them that all went to the 8th floor of a department store and surrounded a rug. They were all told that if they were asked by anybody working there what they were doing, they were to tell them that they were all part of a community living space, and they were looking for a love rug. That they only made this decision when all of them were there together. Tell me that wouldn’t be totally funny to see! 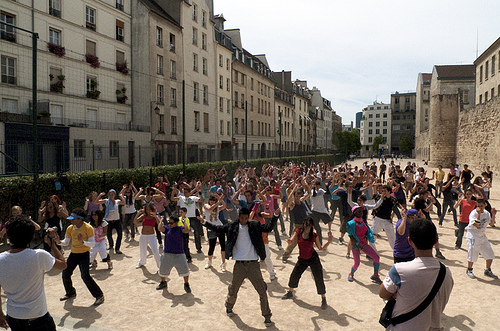 So I ask you, what type of inspiration do you find from this? Does it intrigue you or does it make you roll your eyes at the stupidity idle men brainstorm to disrupt the normal way of life..?

I think its refreshing, creative, and fun. What better way to celebrate life than a (seemingly) spontaneous DANCE PARTY!