A Young Girl Defending Herself Against Eros by Adolphe William Bouguereau

In 1880 Adolphe William Bouguereau painted A Young Girl Defending Herself Against Eros. The french name for this painting is Jeûne Fille Se Défendant Contre L’Amour. The piece is considered Bouguereau’s finest work, and made it’s way to New York to be bought by Henry Flagler. If you’re having trouble remembering who that is, he was the co-founder of Standard Oil, the other founder was John D. Rockefeller.

The painting depicts Eros, the Greek god of love, attempting to pierce the young girl who’s defending herself from his spells. It seems to be a playful scene, with a hint of a smile on the young womans face. The scene takes place in an idyllic countryside, the surrounding countryside of his French studio was the source.

A Young Girl Defending Herself Against Eros is an oil painting on a 61×43 inch canvas. At present, the painting sits in North Carolina at the Kenan House. It’s remarkable to note that in the mid 90s the painting was insured for $2 million while on tour.

Bouguereau was a man of humble beginnings. He had to support himself by painting labels for locals, bookkeeping for a wine merchant, and painting portraits of local patrons while he attended Ecole des Beaux Arts. He was actually very near the last applicant that year to be accepted into the school.

As an artist, Bouguereau, born in La Rochelle, France, on November 30th 1825, exhibited in the salons of Paris for over 50 years until his death in 1905. Bouguereau was predicted by Edgar Degas and Claude Monet to be considered the most remembered artist by the turn of the 21st century, thought it is reported that they detested him because he represented the exact form of traditional institutional art they were breaking down with their own art. Do you think he was one of the most remarkable artists of history? 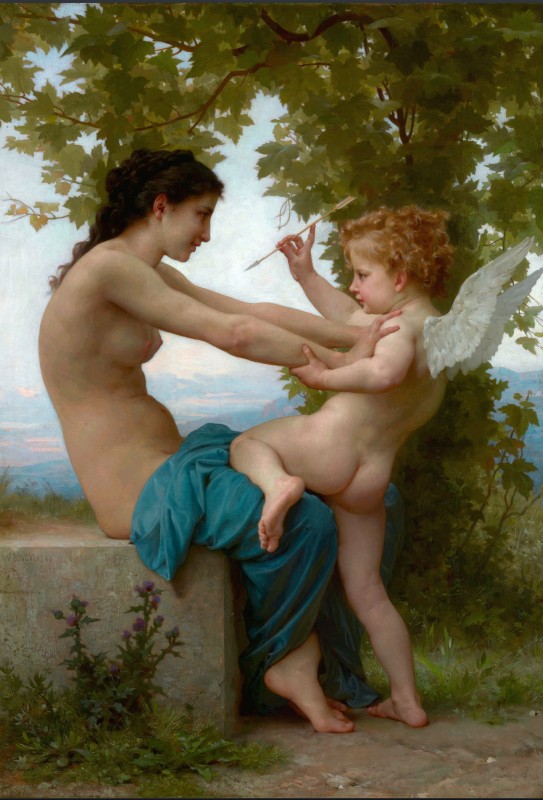