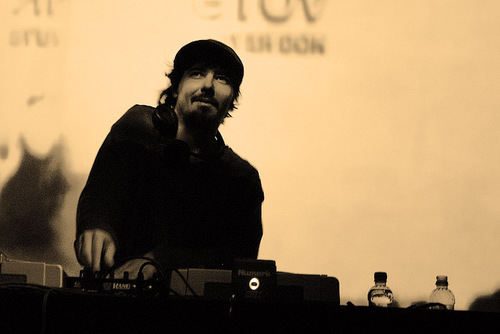 I knew Amon was a special artist right when I first heard his music back a few years, and it was re-enforced when when I watched his little video documentary he made for the making of Foley Room

, where he had the help of a University Masters student studying microphones, who also had equipment.

I heard rumors of Amon’s tour for ISAM

, and how his stage was epic, but I didn’t want to ruin it before I actually went to the show, and spoil the surprise, so, I didn’t watch any videos on it (although there are plenty). Even when I was waiting for the show to begin the bounder right in front of me asked me if I had seen it on youtube, and said it was “Sick man”.

I got there early. I got a 3rd row seat on stage left. I was very happy.

The opener guy I didn’t catch his name, but I know I’ve met him in Vancouver, and he has a little art gallery on the edge of Gastown. He was pretty good, he had some great moments. But how can you compare to Amon?

By the time Amon started, the ground between the stage and the first row of seats was covered with fans patiently sitting and waiting.

The sound was loud. That’s what I like. I always wonder why the opener never gets the same attention on the soundboard as the main event does? That boggles my mind, but maybe they just don’t have the team behind them..

The biggest entertainment to the show was easily his cube. It was a arrangement of squares and rectangles to form a sort of bridge with a third, middle leg. He had three of the largest projectors I’ve ever seen projecting onto these cubes the entire night. And he was inside of the middle leg of the bridge. Yes, he was inside of it behind a screen.

I cannot compare his video show to anything I’ve ever seen before. If I was forced to, I would say it’s a combination of Transformers, Pink Floyd’s The Wall, and any audio program visualizations. It was all of these put on steroids and synched to some of the baddest, fattest, gnarliest tunes you can imagine (no really, go listen to ISAM

Every now and then he would switch on a light inside his cube and it would light up his cell and the crowd could see him, and then he’d turn it off, always synched to the music. This was super cool. Left the crowd anticipating and wishing he’d turn it on again, and by crowd I mean me. 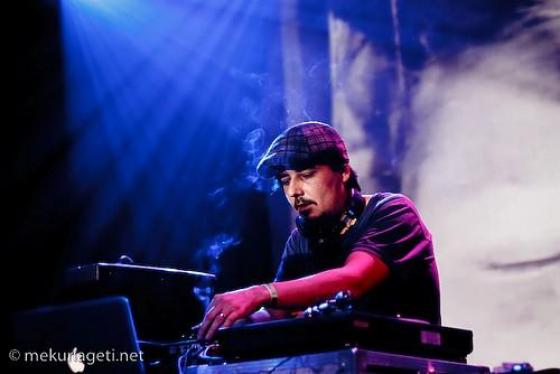 By the end of the show, I didn’t want it to stop. But, he stepped out from behind his cube, gave a grand bow, stepped back behind for another few songs, and that was the night.

One note, the young punk fellow in front of me decided that he would pass out in a seat for the entire show. This was kind of odd, and distracting, though I was standing, I was still concerned for his safety. I guess I was traumatized by the story of Bon Scott of AC/DC when I was younger.. After the show, one of his buddies came and tried to rouse him, but he was out COLD. I wonder what he had..

I left the show tapping the side of my pants and still moving my head. This lasted until I got home, and has returned at this time now as I remember the event. I’m still shocked when I think of the show, I do not see how any other artist could have done such a thing, but I guess there are many other DJs out there that would love to synch their music to some killer visualizations. I hope they do.