Let me step back a few moments.

Schiele – as many artists tend to do – lived an alternate type of lifestyle as he explored. For example, when he was younger and his fascination in trains grew, his father (who was the train master in Tullen) was so disturbed by his representation of them that he had to burn his sketch books.

At 16 he was accepted into Kunstgewerbeschule (School of Arts and Crafts) in Vienna (1906), to which he was encouraged by the instructors a year after to go to the more formal and traditional academy, Akademie der Bildenden Künste. It is without a doubt that the conservative styles of both academies frustrated Schiele, which ultimately led him to leave 3 years later. Schiele founded the group Neukunstgruppe (“New Art Group”) with other dissatisfied students shortly after leaving Akademie der Bildenden Künste.

Around this time, Schiele found Gustav Klimt (an alumni of Kunstgewerbeschule), who happily took interest in Schiele, encouraging him by purchasing his work, trading his work for Schiele’s, and also arranging exhibits and models for the younger artist. It was at this time that Schiele met Walburga (Wally) Neuzil, a young lady who would be the model for many of his future works and partner for some time. Around 1911 they were chased out of Český Krumlov (Krumau) in southern Bohemia (Czech Republic) – the birthplace of Schiele’s mother – because the residents strongly disapproved of their lifestyle, not to mention their employment of the town’s teenage girls as models (allegedly).

In 1912 Schiele was arrested for seducing a young girl below the age of consent. Hundreds of his drawings were seized because they were considered pornographic, but the charges of seduction and abduction were dropped. However, during the trial, the judge burned one of the offending drawings over a candle flame.

It is tragic to learn that the Spanish flu pandemic (which took 20,000,000 lives in Europe) took Schiele’s pregnant wife of 4 years (not Wally), and Schiele himself 3 days afterwards at the age of 28.

It is interesting to note that Dead Mother is part of the Expressionist movement, a symbolic painting that clearly has influence by psychoanalysis. Austrian neurologist and founding father of psychoanalysis, Freud (May 6, 1856 – September 23, 1939), was becoming very eminent in theology, and as a result, all society. This reasoning process, and identification led to some very astounding revelations in many genres of expression, particularly in art.

It is almost too easy to identify certain aspects of Schiele’s life with this painting. His eldest sister died at the age of 10, when Shiele was just 3 years old. His father died in 1904, when he was 14, and his mother had lost a child at birth and also had a stillborn. To further complicate things, his mother married his fathers brother-in-law (this fact seems odd).

Morbid is the word, dark and tortured. 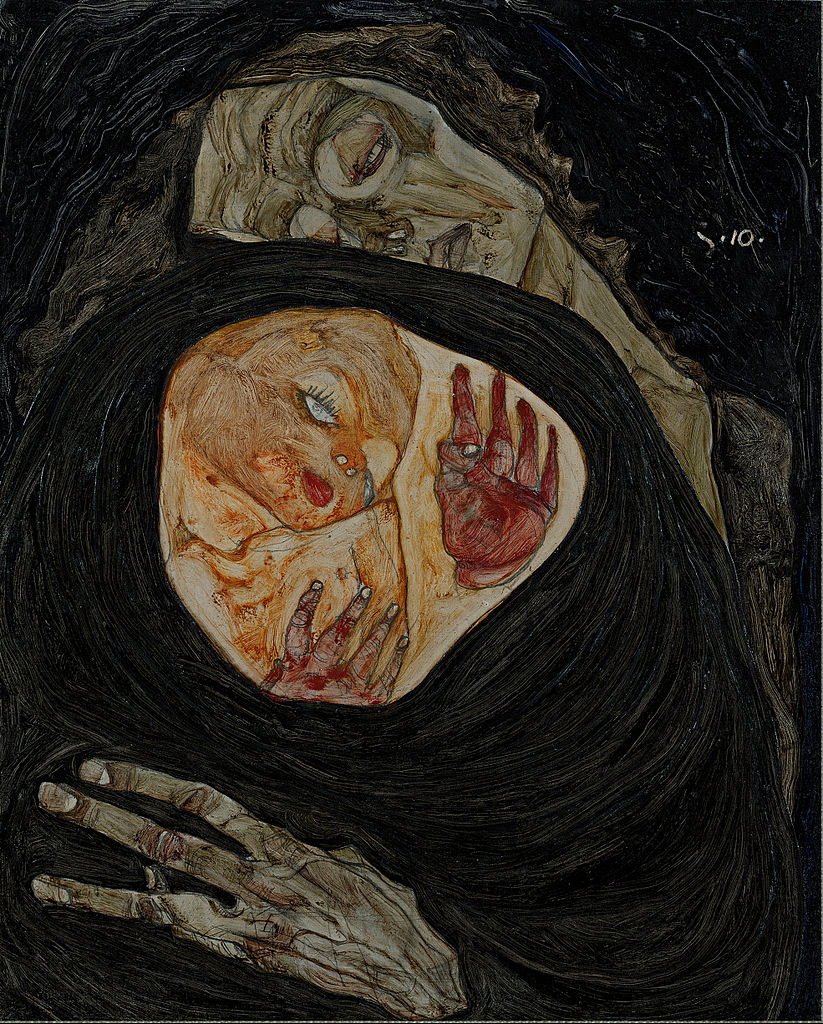