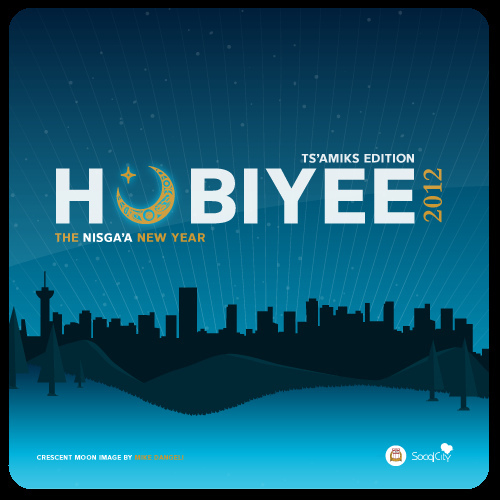 This past weekend, February 3rd and 4th, was Hobiyee (@HobiyeeEvent), a Nisga’a Ts’amiks (@NisgaaTsamiks) New Years celebration held at the PNE Agridome in Vancouver BC. To say the least, it was humbling to watch; so many beautiful costumes, dancers, songs, and people everywhere. It was the first ever time the Nisga’a have held an event to the public to share in the journey on such a grand scale! 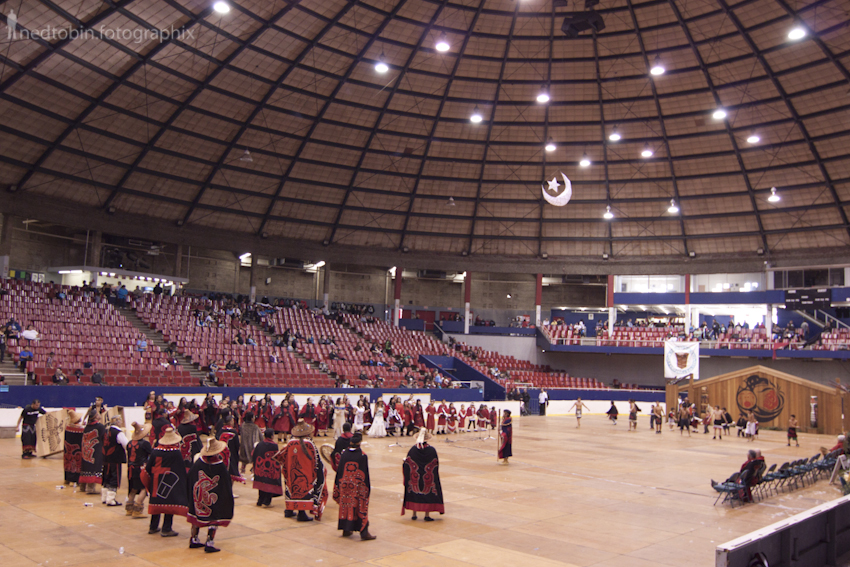 We were invited by the girls at  Social CityNetworking (who put on great events very regularly around Vancouver), some great friends of Chronicles of Times, to come and join them in this celebration, and that’s just what we did. 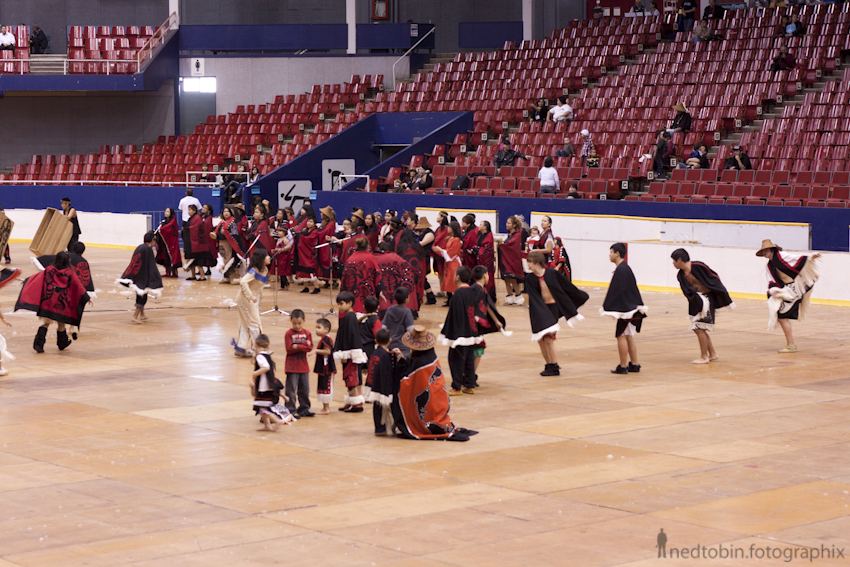 It was amazing to see the children, that was probably one of the most heart warming things of the whole event that really sunk in. It was the way the First Nations dealt with their children; they respected them, they encouraged them, they let them explore on their own and encouraged them to learn about the culture. This garnered a lot of  respect. It was fascinating to see the children on the floor running around weaving in and our of the dancers, learning what they were doing, mimicking what they were doing, and having crucial parts in the celebrations as well. 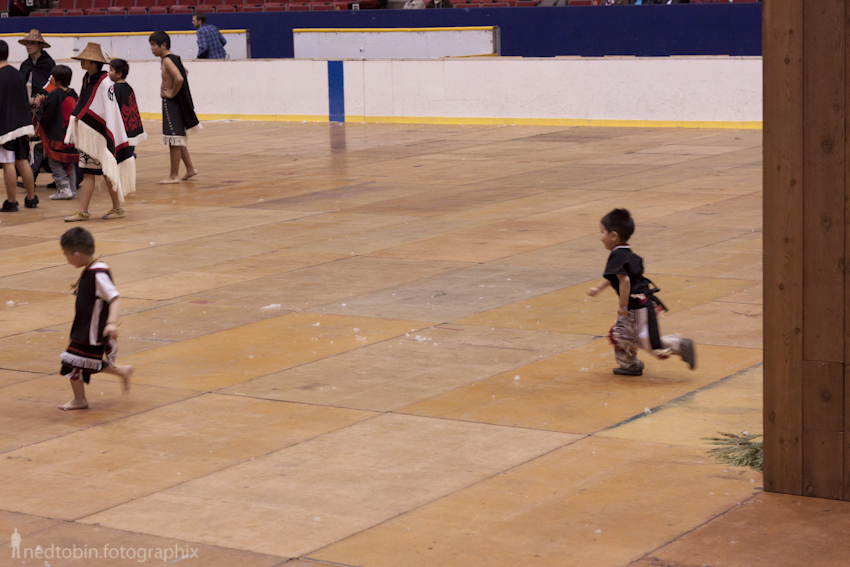 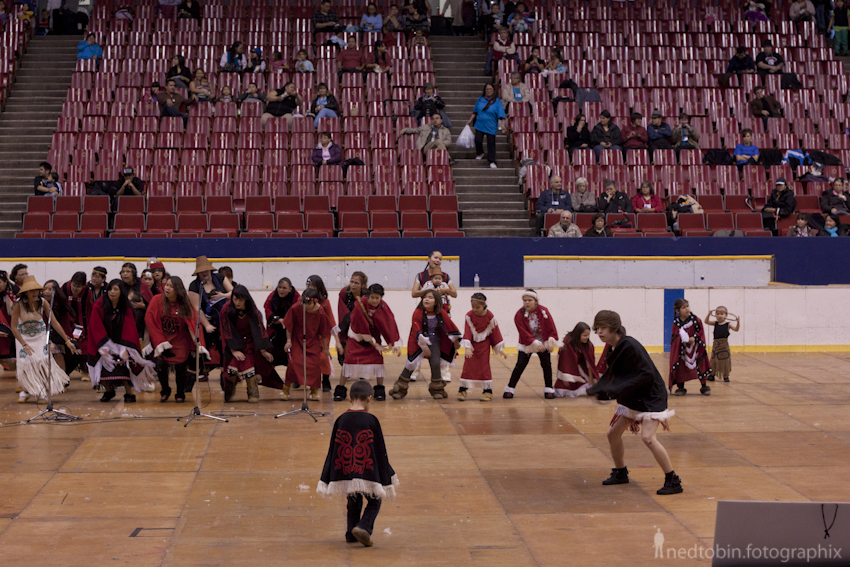 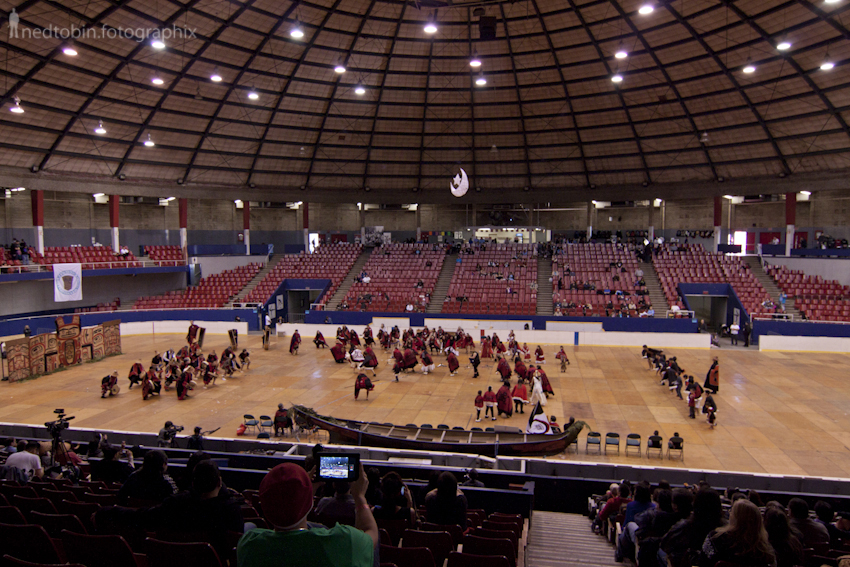 The crest of the new moon in early February (or the Ts’amiks New Year) held a specific significance to the celebration. If you see in the picture above, how the arc of the moon opens upward, this symbolizes that the people will be able to have a successful year, with plentiful because they will catch everything. Now, if the arc opens downwards in this early February new moon, the opposite of that above, it symbolizes that they will struggle this year, and there will be lots of challenges because everything seems to fall away.

The regalia was simply beautiful. Some of the dancers had babies strapped to their chests and bounced them around! Also, in the image below, see those two young men facing off head to head? They were dancing in the middle of the circle as the other dancers danced around them. 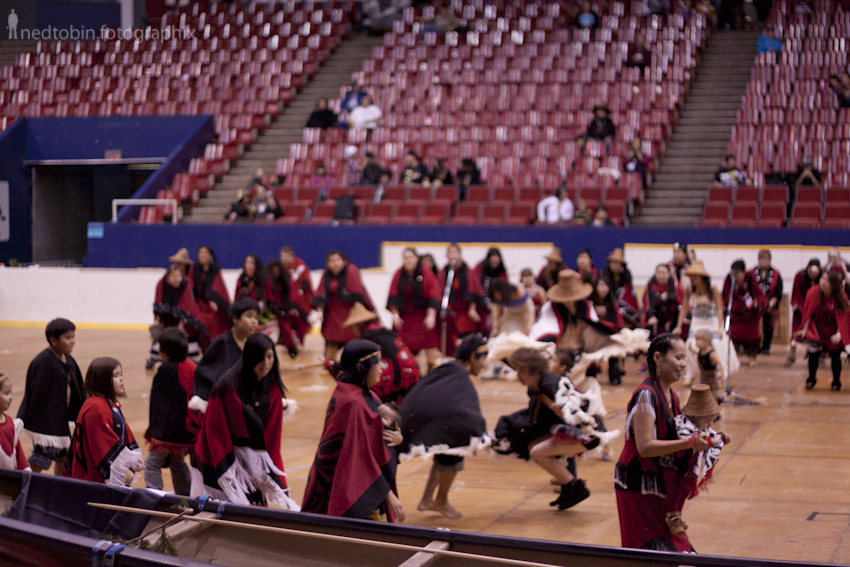 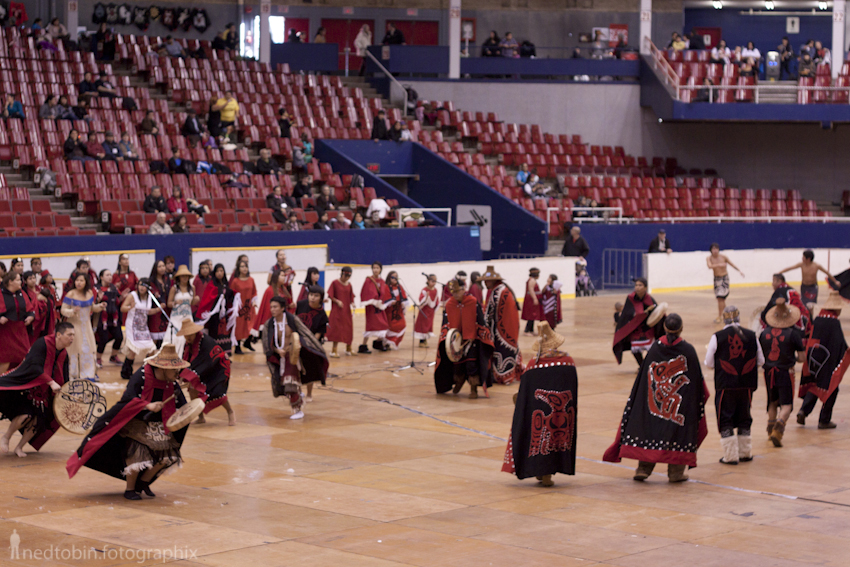 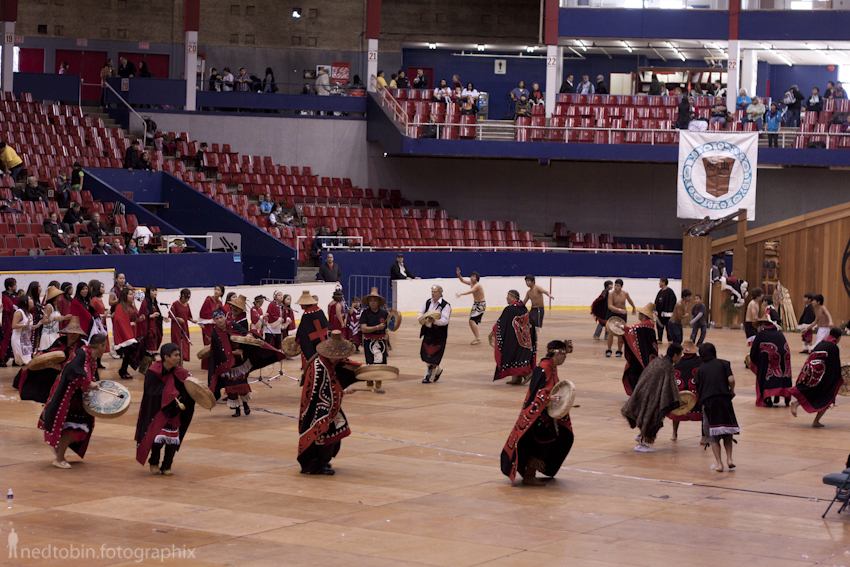 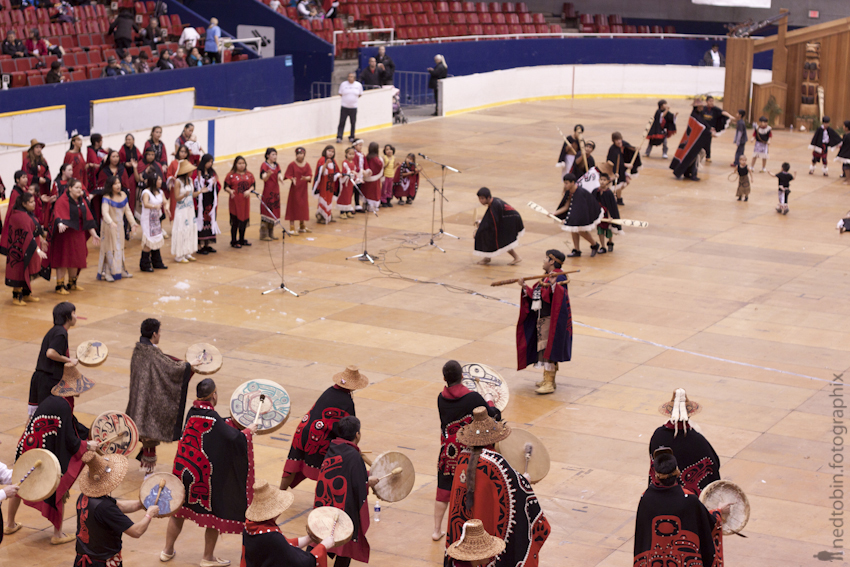 The dancing was beautiful. As with most First Nations spirituality, their dancing is based on animals, or journeys. Dancers was usually bent over, with their plummage out (hand behind them) or opening up like a swimmer doing the breast stroke. Always in lines. It seemed like the processions had a formality that dated back many thousands of years, and in fact, some of the songs were explained to be handed down for thousands of years. Whenever a group was coming onto the floor, they were led out by a leader, or some scouts that would search the area for any enemies or something of the sort.

At some time during their performance, some of the groups invited the audience or the people backstage (other performers) to come out and share the floor with them. It really gave the feeling to an observer of what it meant to be at a Potlatch, where everybody was encouraged to dance, as a ritual to their acceptance to the ceremony. Perhaps this is just the tip of the ice burg to the significance of this. 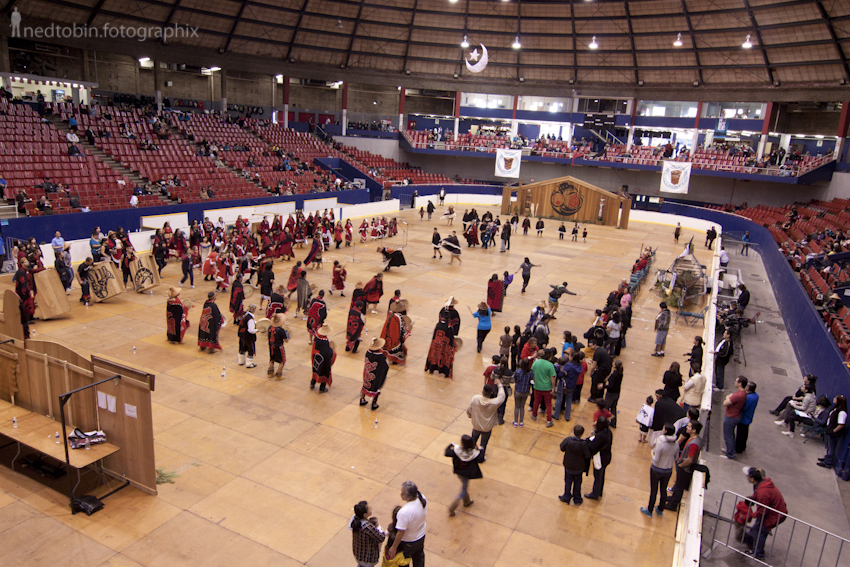 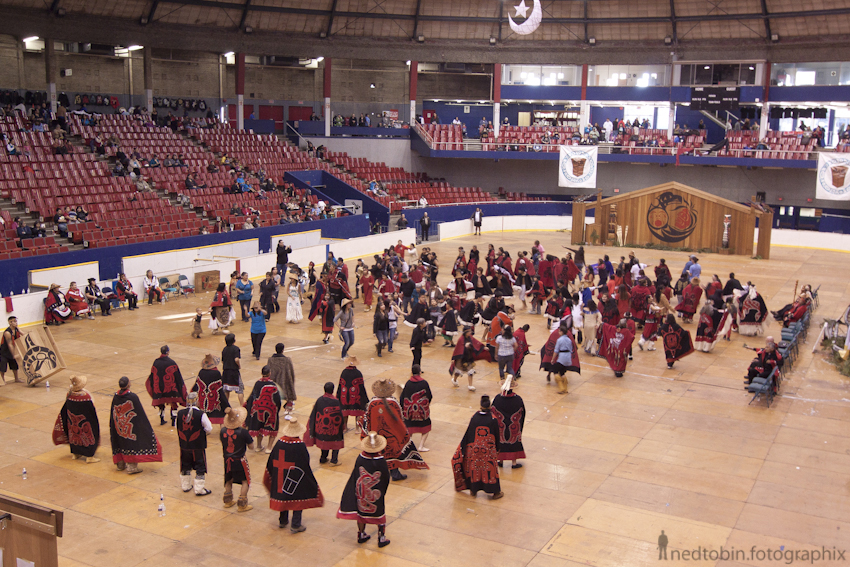 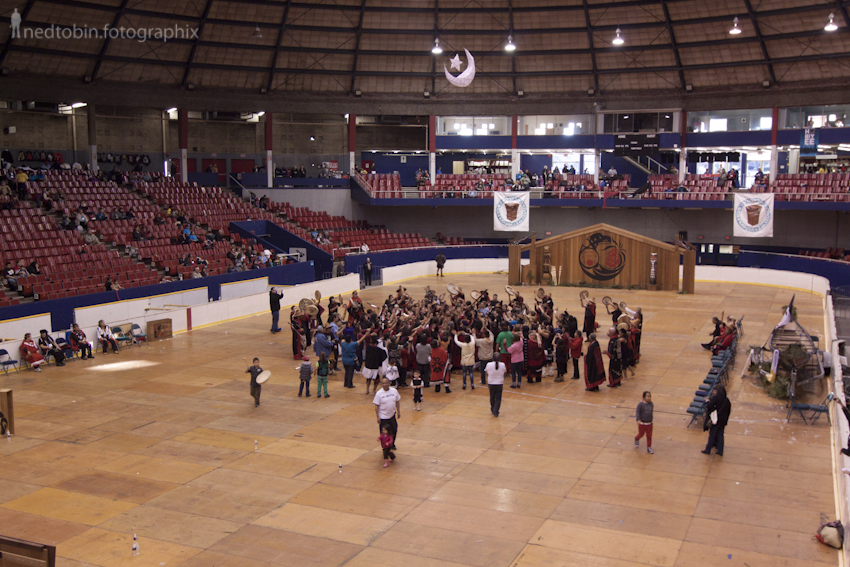 Many of the performers would perform in multiple groups throughout the day. Some of the the groups were from all the way up the coast in places like Terrace, or even further north in Whitehorse.

This first group shown above had a very beautifully symmetric finish, shown here below. 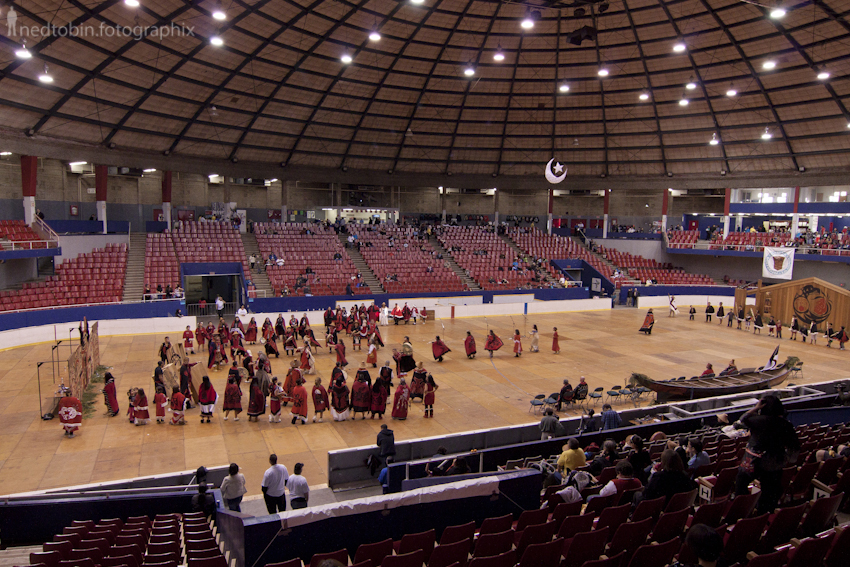 The next group that came on has very extravagant costumes, and were much smaller than the first, as you can see. They had a grand entrance where they started singing/chanting/drumming behind the cedar wall, and then came out backwards, with the drummer leading them out. 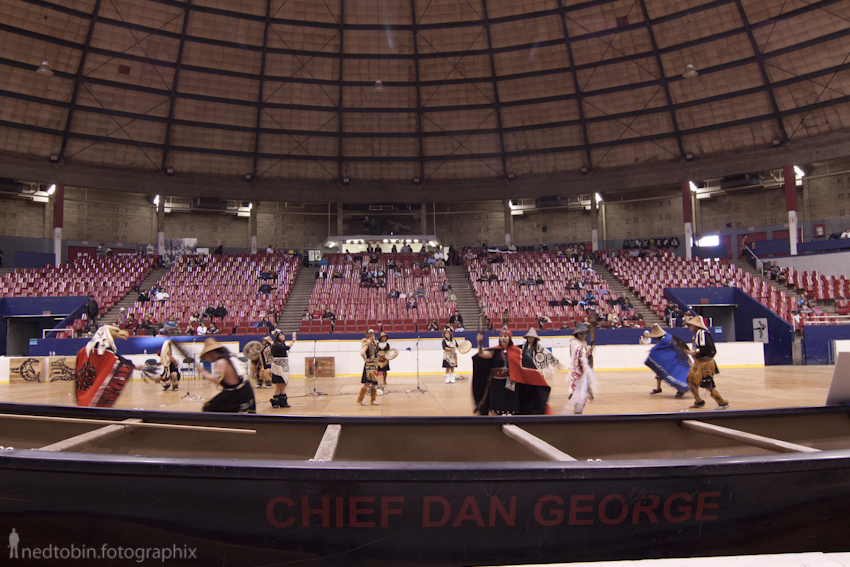 This group was really enjoyable, as they really had a lot of skill. Their songs were intense, they felt, and had meaning. They seemed like a more professional group of dancers from the first group, not to diminish the impressiveness of the first group. They just really had a very intense attitude and it clearly showed during their performance. 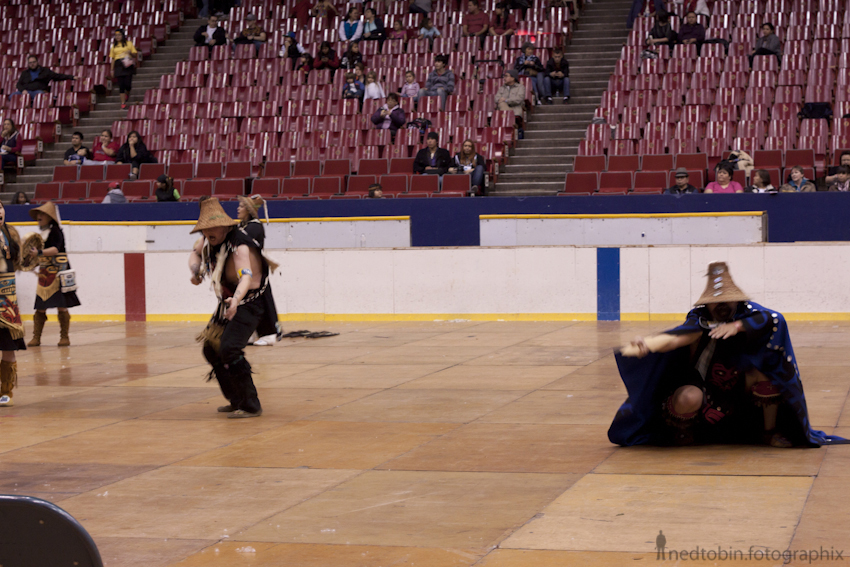 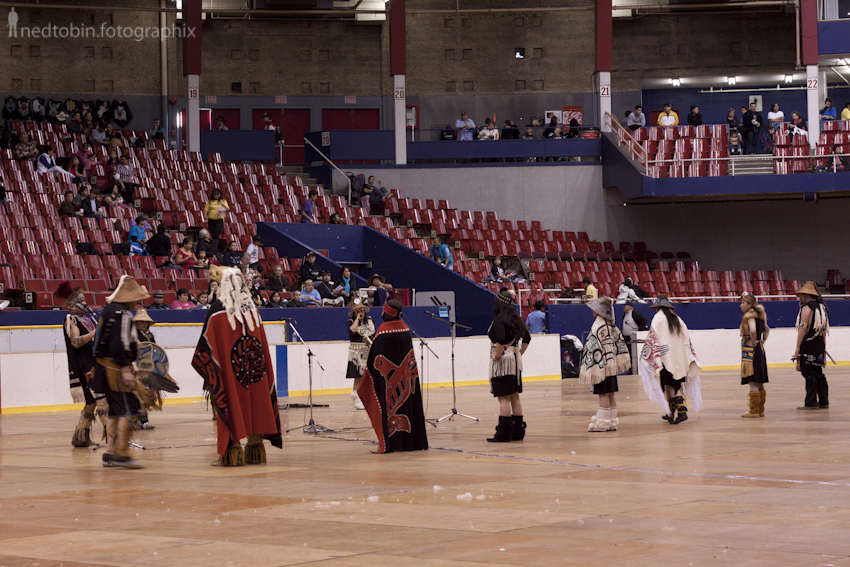 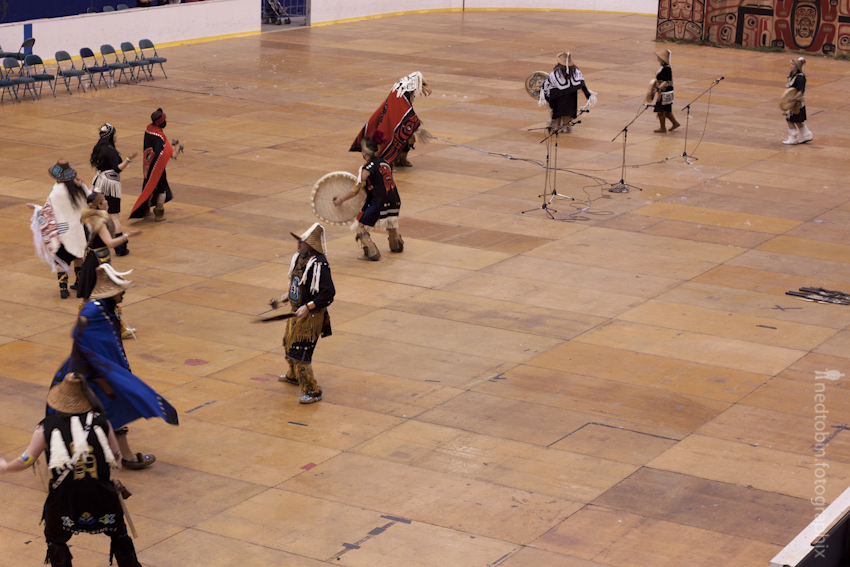 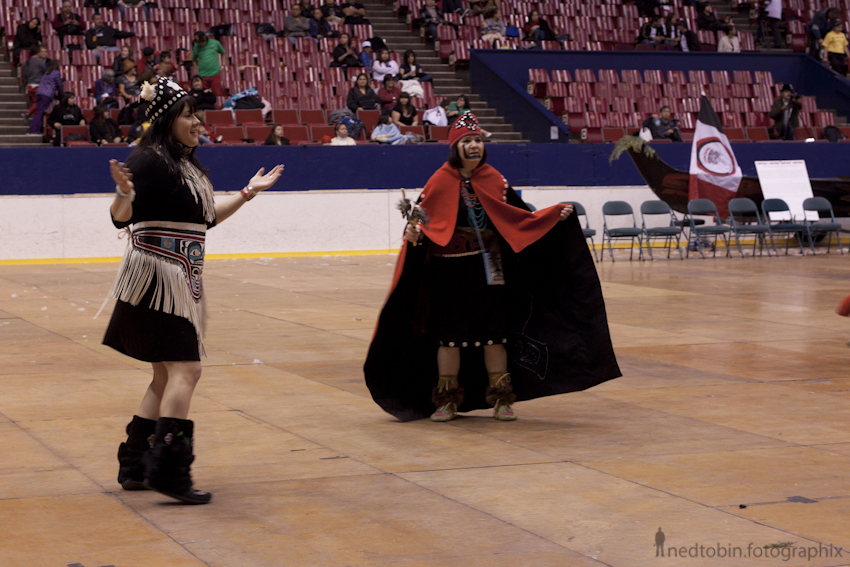 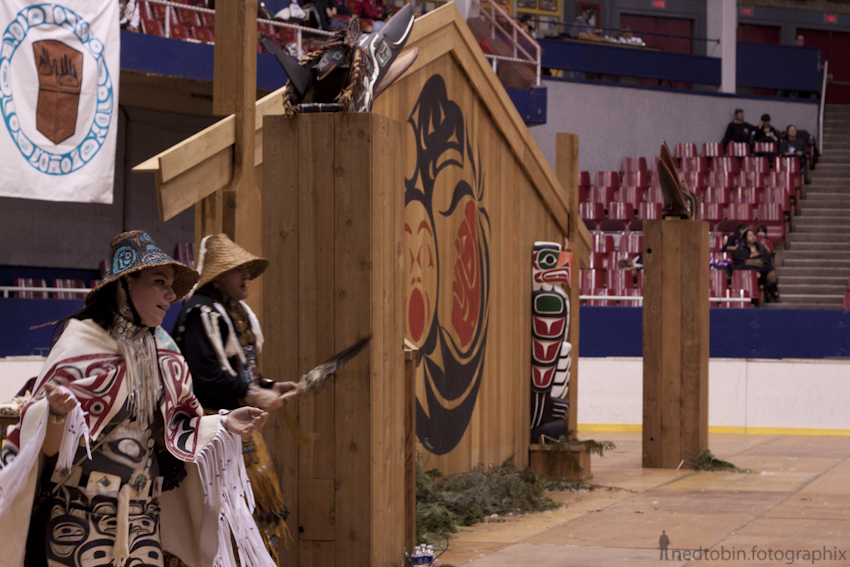 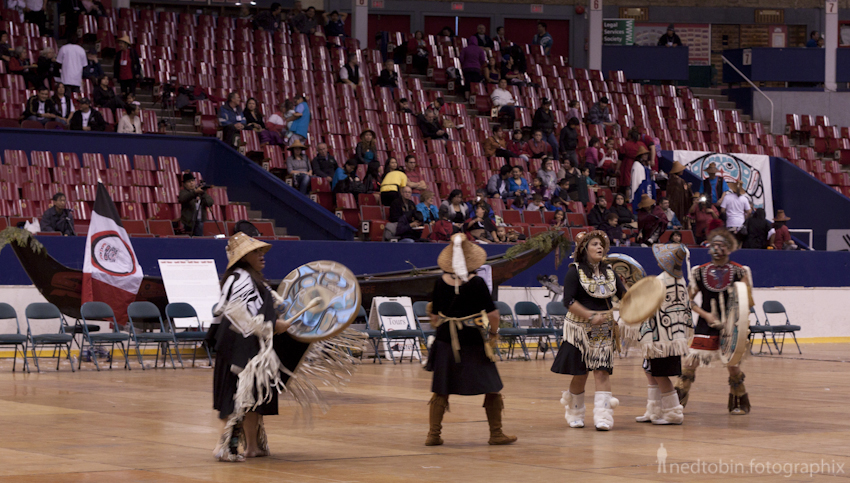 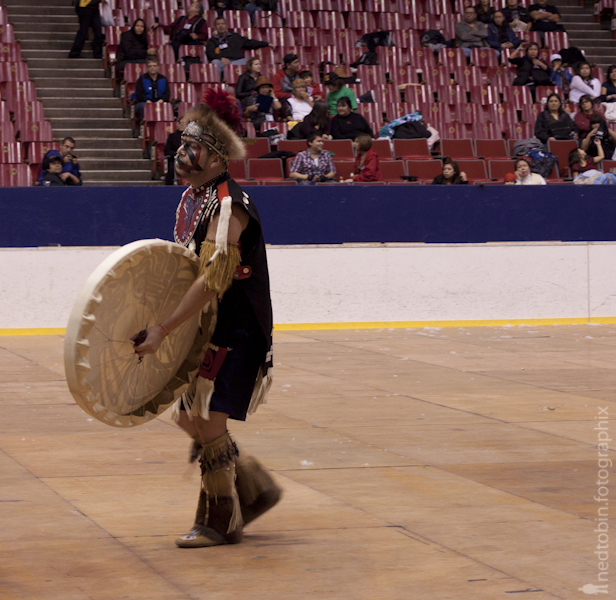 It would be hard, for any group, to follow what that previous group did, but the next group had their own perspective that was hard to compare to. They weren’t the most extravagantly dressed dancers, nor were they they most numerous of dancers, but they had a rawness, a conviction, and almost a sorrow (though it was still a celebration) that was unmatched by any of the other groups captured. The two, seemingly scouts, that led the dancers each time they came out for a loop was pretty mesmerizing; moving in unison to the beats of the drum, jumping with each beat, shown below. 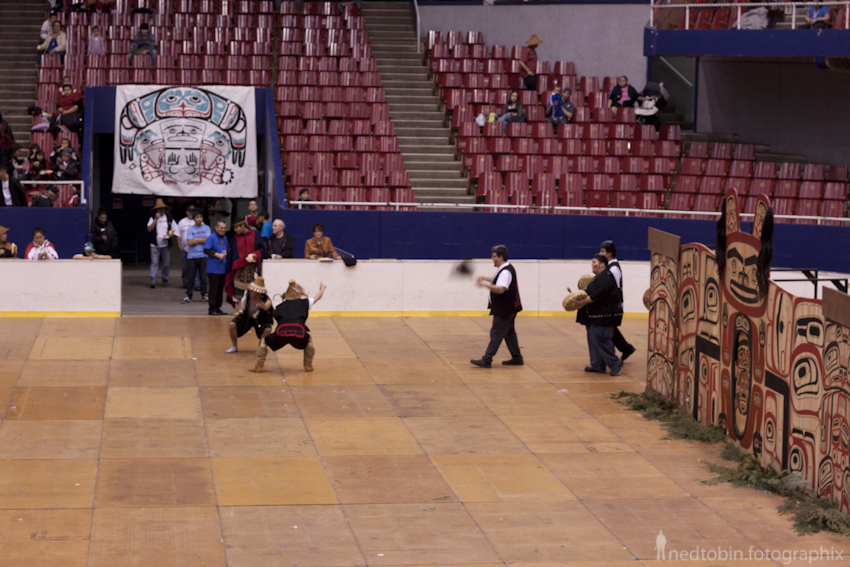 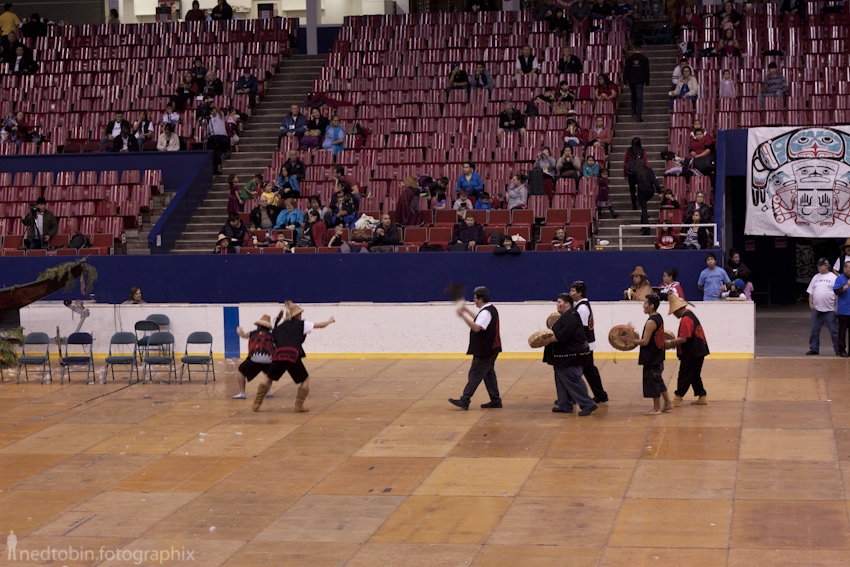 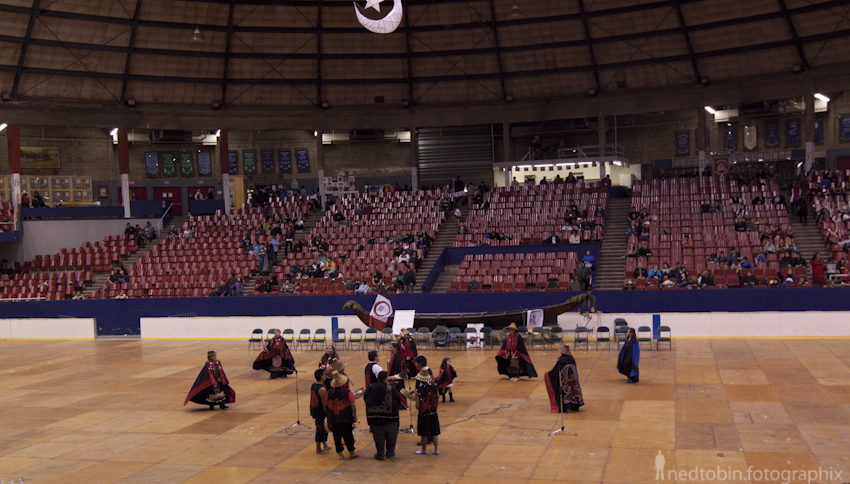 It was enchanting to watch their circle of drums: what would it be like to be in the center of that, listening and feeling what they were also feeling.

As well, this group invited the crowd to come dance with them, and share the journey, which was fun to watch. 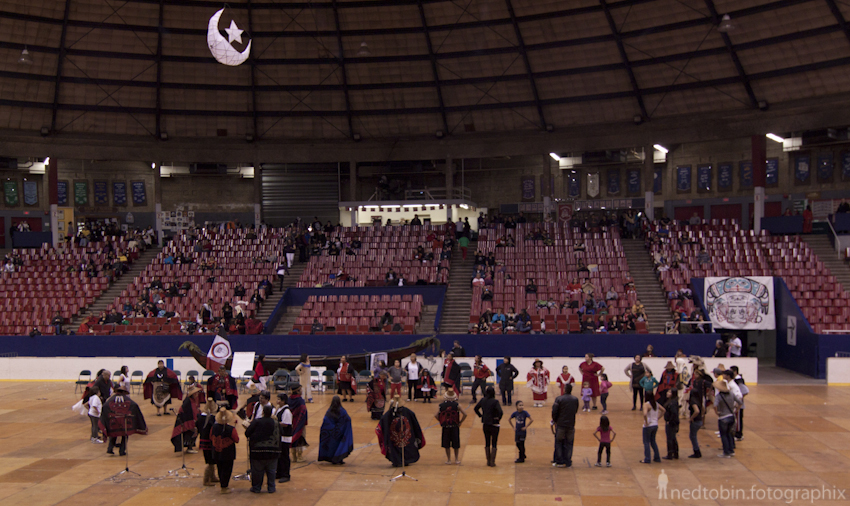 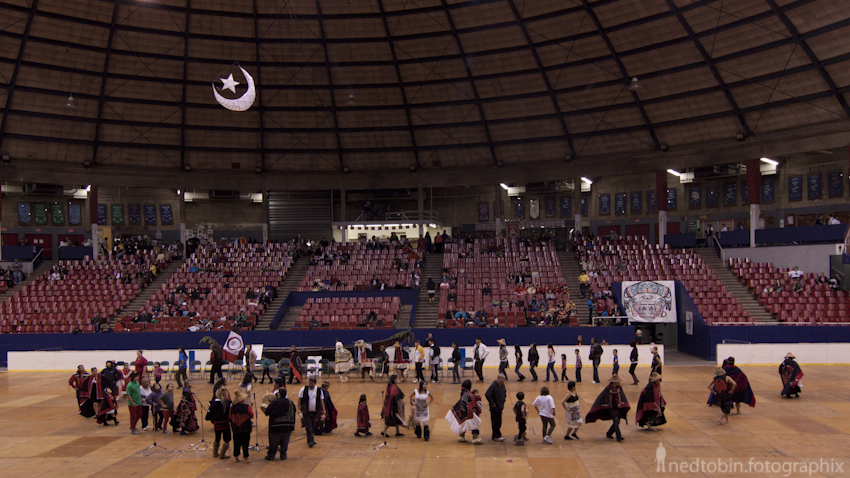 All in all, the event was very amazing to partake in. It would have been amazing to make it back for that evenings drum drill, or the next night when there was a Grand Finale; they were both supposed to be must attend events.

Did you get a chance to attend Hobiyee this year? Perhaps this article has interested you to attend the next years celebration. This event not only holds historical and regional significance in BC’s but all of North America,  attending something like this is much more powerful and entertaining, and long lasting, than sitting in a pub and watching what most North Americans are doing this weekend: the NFL Superbowl.

All photos courtesy of Ned Tobin and brought to you by King Kabuz Media.