Ides of March by Cy Twombly

Cy Twombly was born Edwin Parker Twombly, Jr. (b. April 25, 1928) in Lexington, Vigrinia.  He adopted the nickname of Cy from his father, who adopted his nickname after the notorious Cy Young (Twombly’s father was a pitcher for the Chicago White Sox).

Twombly began studying art at the age of 12, and spent the next dozen years in various fine art schools and receiving scholarships around the world. In 1951 Twombly had his first solo exhibition in New York at the Samuel M. Kootz gallery, which catapulted his international career and success as an artist. Shortly after this exhibition he, along with Robert Rauschenberg, received a grant from the Virginia Museum of Fine Arts to travel North Africa, Spain, Italy, and France, after which he began his short career as a teacher at the Southern Seminary and Junior College in Buena Vista, Virginia – 1954. In 1957 Twombly moved to Rome where he met his wife Baroness Tatiana Franchetti, sister to the art patron Baron Giorgio Franchetti, where he spent the better part of the rest of his life painting.

It was around 1955 – 59, that Twombly worked and shared art spaces in New York with a group of artists including Jasper Johns, Robert Rauschenberg, John Cage, being influenced by the teachers at the art school he was attending, Franz Kline, Ben Shahn, and Robert Motherwell. Here Twombly began to develop a technique of gestural drawing that appeared to be scratched into the surface. He was also heavily influenced by African tribal art, and practiced sculptures made of discarded objects to try and evoke this style.

“Over the surface of his Roman paintings would thus appear so many cocks and cunts, so many wounds and scorings, so many tatters played over the surface of the work, the erotics of which is that its body will never be reconstituted, whole.” ~Rosalind Krauss

While in the mode of creating, Twombly would cover an entire room with a canvas, and approach it however his desire fancied. After he had covered every wall with paint, he would cut out a section that looked as if it could be used, which he would nail to the wall.

Ides of March was completed in 1962 and is styled as an abstract expressionism figurative painting. 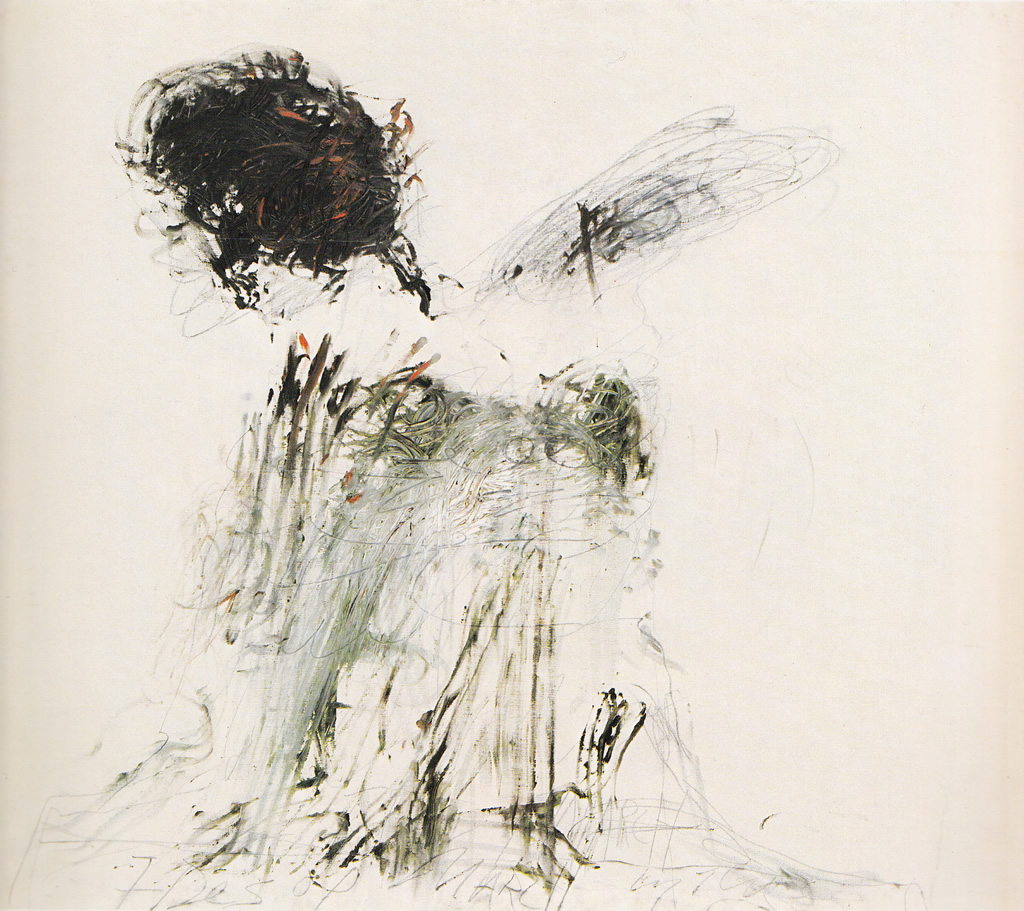