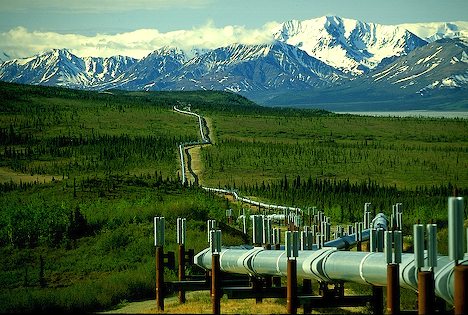 The Northern Gateway Pipeline Project is a tragedy to Canada, an absolute tragedy.

What is the proposition? To create a pipeline from Bruderheim, Alberta to Kitimat, British Columbia that sends crude oil to the international shipping port in Kitimat that can quickly, in a “streamlined fashion” get to the greedy Asian markets.

So, what is a pipeline you ask? Well, from Enbridge’s website:

An extensive network of buried pipelines and above-ground facilities such as storage tanks, pumping and compressor stations. A right-of-way (ROW) is a strip of land usually between 18 metres (60 feet) and 36 metres (120 feet) wide, containing one or more pipelines. Pipeline rights-of-way are acquired from landowners, other utilities or government entities by obtaining an easement, permit, license, or, in limited cases, through purchase.

Breaking this down, to me this means that Enbridge doesn’t even have to buy this land, but this may just be a misnomer. They just get a easement for the land, and start pumping.

easement: A right to cross or otherwise use someone else’s land for a specified purpose.

If you’re interested in watching Enbridge’s “Real Answers About our Pipelines” click here. [It opens up in your local media player]

According to Wikipedia, the pipeline will create around 104 permanent jobs in Alberta and British Columbia. It will also create around 3000 temporary jobs during the construction of the pipeline. If you’ve watched the video, you’ll see the efforts Enbridge puts in to make sure that the integrity of the environment is not only ensured, but regularly tested and monitored. 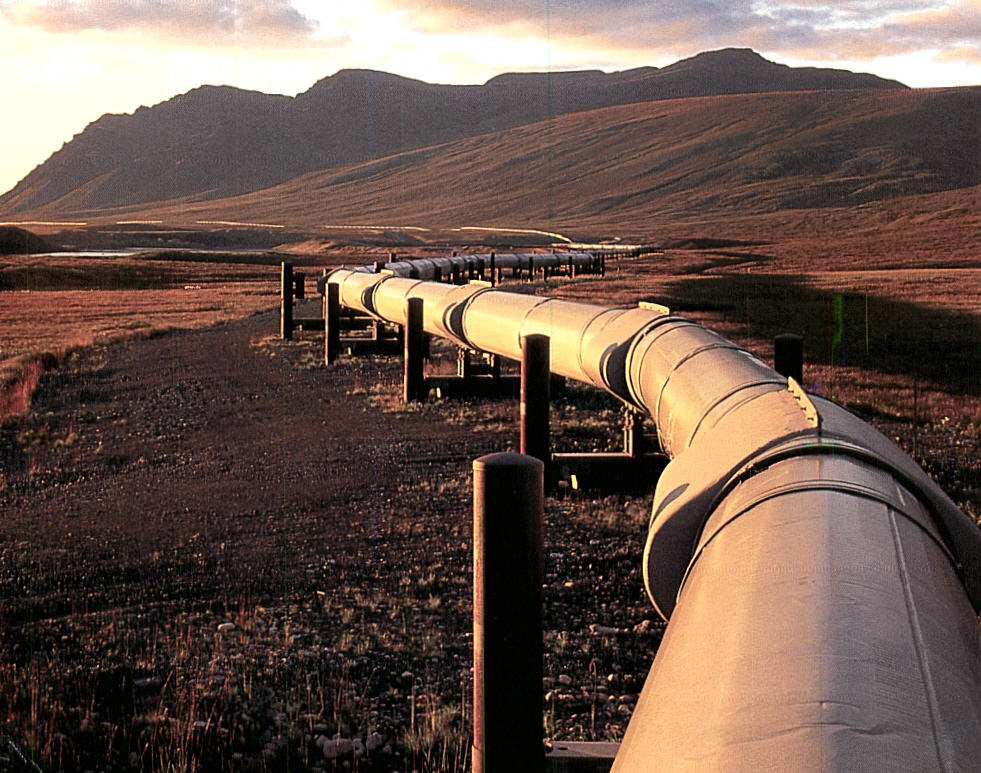 So, it’s not the environmental hazards that makes this a tragedy as the video showed. In fact, it’s actually much cleaner for the environment because it saves the earth from the millions of tonnes of pollutants all the transportation would require to do the same thing. However, it’s the large scale exportation of our countries resources that is the tragedy.

Essentially, what this ensures is that we get the comparatively cheap resource in its crude form out of the country as quickly as possible, where the importing country will then employ thousands to refine it, and distribute it as they see fit, which will be then sold at a much higher marked up price.

Lets break this down, step by step.

First, Canada loses the income from all the infrastructure that would need to be built and maintained with the refineries.

Second, Canada loses a continual income from the people this infrastructure would need to employ full time.

Third, Canada loses taxes paid on the sale of the refined oil.

Fourth, Canada loses when we have to pay a marked up price on the refined oil we then have to import from a foreign land.

Fifth, Canada loses on the markup price the spread of crude and refined oil offers.

What does Canada gain?

We are known as a giving country for being so liberal with our precious natural resources.

We allow oil companies like Enbridge to avoid the high taxes paid on the higher priced refined oil.

So you tell me, how do you feel about this?

Well, a poll released in the Edmonton Journal (among others) shows a plethora of statistics that rather confuse most people I should think. It says that most people feel that the main issue with this is environmental hazard, and the main benefit is employment/economic/export/trade.

Personally, I think this aligns with the direction our government took with our coal industry of Eastern Canada throughout the 20th century when coal was a major energy supply, the fisheries industry where we ship all our fish down to canneries in the rich ports of the USA who then mark up the price of the product a few times higher.

My point here is when will Canada learn that if we actually start keeping our rich resources in Canada and build the infrastructure to do this Canadian style, our beautiful country of ours would find itself in a much more prosperous position.

What got me thinking about this topic? Well, in a reply to a former Assistant Deputy Minister of Environment and former Fish and Wildlife Branch Director, the representative of the Prime Minister of Canada has this to say about any opposition to any alternate thinking. 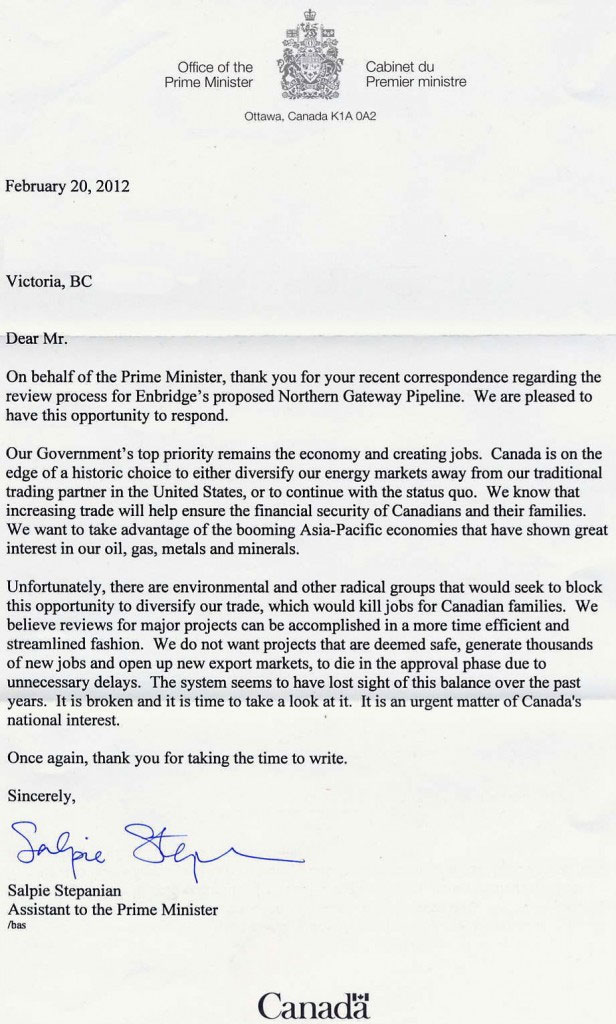 So, in summary, I do not fear the evil oil pipeline will burst and cause millions of animals, acres, and vegetation to die on the spot. Rather, I feel that when Canada exports its precious resources it’s selling itself short of a major profit margin it could otherwise capitalize on.

Come on Canada, come on Salpie Stepanian and Stephen Harper. Come on Enbridge. Lets keep a well rounded view of Canada’s future in mind when we make these types of plans. Rushing into a project like this isn’t necessary. Lets get creative with our solutions, there are plenty of resources to come up with just as viable solutions that keep Canada prosperous.

[this letter was taken from Cowichan Conversations with Richard Hughes]