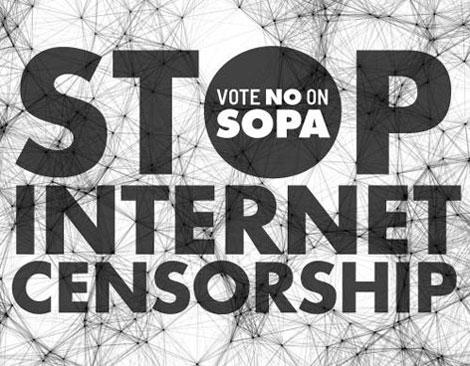 So today is reportedly the largest Internet strike in history, which to me is a pretty damn big thing. In rising protests against one of the most ludicrous bills ever invented by the US, the Protect Intellectual Property Act (PIPA) and Stop Online Piracy Act (SOPA).

All across the world citizens are protesting against this mad hysteria invented by media conglomerates. Twitter, Facebook, & Tumblr (to name a few ) are exploding with protest slogans and hash tags: #SOPASTRIKE, #STOPSOPA, #SOPA, #PIPA.

Websites like Wikipedia.org, ProtestSOPA.org, are popping up everywhere, or rather blacking out everywhere in protest against the bills. An easy plugin for WordPress has been made for the cause (http://downagainstsopa.com/ ) , and Tumblr also has it’s own rebellion (http://sopastrike.com/#how-to-strike). Google has a protest page to sign the petition (https://www.google.com/landing/takeaction/). It’s really quite a big deal.

So what is it doing? Well, hopefully this infographic taken from (http://americancensorship.org/infographic.html) will be able to explain it a little bit more effectively.

However, I will attempt to give you my shortened take on the matter.

It really makes me scared to think how little people are concerned over this matter, and how little people have taken the time to learn about this issue. Earlier today I spent a considerable amount of time trying to engage people about this on Twitter, but for some reason, there were only a handful of people willing to discuss it.

This will in fact affect everybody’s lives around the world. My parents enjoy watching Youtube videos sometimes, which could soon be sensored. My cousins enjoy their WordPress blogs, which could be shut down. My friends enjoy their Facebook freedom, and post any random video they feel like watching, which could be blacklisted and shut down. How about random internet pages you go to? Heard about some guy on Wikileaks who got put on the “Wanted” list by the USA? Yeh, you’d probably not be able to read about him because that stuff would be blocked.

Just found this other interesting tid bit of information that I have not confirmed.

We’re not just talking blocking a single page, or putting black boxes over “dangerous” or “infringing” content. We’re talking the entire domain could be confiscated, banned, blocked, disbanded, censored, no more. You would no longer have a domain.

I found that cbcnews.com did a very interesting article  on SOPA & PIPA and explained it very clearly.

Take a look at this site, sopastrike.com, and see how many major websites have already signed up to protest, no doubt there are millions of others around the world.

I will stop here with this, and leave you with a few links to add your name to the petitions.

Oh, and yes, this website would be blocked because I have taken images from unknown sources and used them on this site.