~ an essay by Bruce Schneier

note: this essay was originally posted on CNN, and Bruce Schneier’s own blog. It is highly suggested you subscribe to Bruce’s blog if you’re at all interested in digital security. 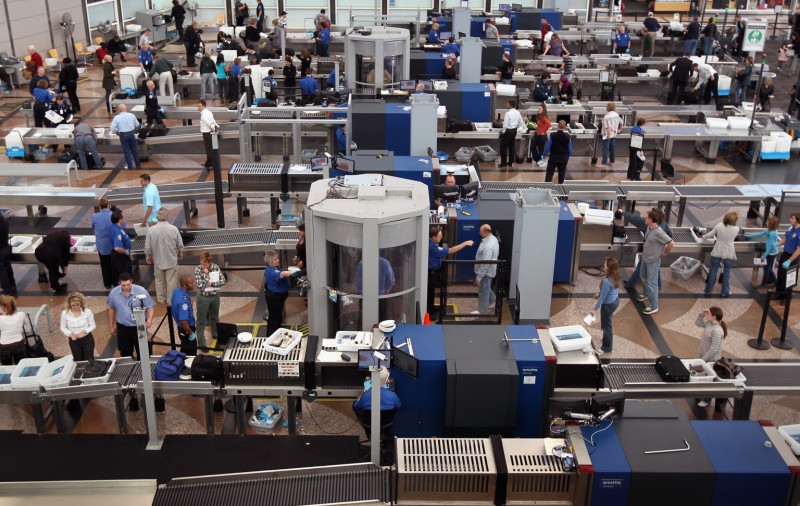 DENVER – NOVEMBER 22: Air travelers move through a main security checkpoint at the Denver International Airport on November 22, 2010 in Denver, Colorado. The TSA is bracing for heavy traffic the day before Thanksgiving, as two separate internet campaigns are promoting a “National Opt-Out Day” protest during which travelers are urged to “opt out” of the new body scanners because of concerns over privacy and possible exposure to radiation. Those passengers who refuse the scans must instead undergo an enhanced pat down by TSA agents, which could further slow down security lines on the busiest air travel day of the year. (Photo by John Moore/Getty Images) (Photo source: Huffington Post)

News that the Transportation Security Administration missed a whopping 95% of guns and bombs in recent airport security “red team” tests was justifiably shocking. It’s clear that we’re not getting value for the $7 billion we’re paying the TSA annually.

But there’s another conclusion, inescapable and disturbing to many, but good news all around: we don’t need $7 billion worth of airport security. These results demonstrate that there isn’t much risk of airplane terrorism, and we should ratchet security down to pre-9/11 levels.

We don’t need perfect airport security. We just need security that’s good enough to dissuade someone from building a plot around evading it. If you’re caught with a gun or a bomb, the TSA will detain you and call the FBI. Under those circumstances, even a medium chance of getting caught is enough to dissuade a sane terrorist. A 95% failure rate is too high, but a 20% one isn’t.

For those of us who have been watching the TSA, the 95% number wasn’t that much of a surprise. The TSA has been failing these sorts of tests since its inception: failures in 2003, a 91% failure rate at Newark Liberty International in 2006, a 75% failure rate at Los Angeles International in 2007, more failures in 2008. And those are just the public test results; I’m sure there are many more similarly damning reports the TSA has kept secret out of embarrassment.

Previous TSA excuses were that the results were isolated to a single airport, or not realistic simulations of terrorist behavior. That almost certainly wasn’t true then, but the TSA can’t even argue that now. The current test was conducted at many airports, and the testers didn’t use super-stealthy ninja-like weapon-hiding skills.

This is consistent with what we know anecdotally: the TSA misses a lot of weapons. Pretty much everyone I know has inadvertently carried a knife through airport security, and some people have told me about guns they mistakenly carried on airplanes. The TSA publishes statistics about how many guns it detects; last year, it was 2,212. This doesn’t mean the TSA missed 44,000 guns last year; a weapon that is mistakenly left in a carry-on bag is going to be easier to detect than a weapon deliberately hidden in the same bag. But we now know that it’s not hard to deliberately sneak a weapon through.

So why is the failure rate so high? The report doesn’t say, and I hope the TSA is going to conduct a thorough investigation as to the causes. My guess is that it’s a combination of things. Security screening is an incredibly boring job, and almost all alerts are false alarms. It’s very hard for people to remain vigilant in this sort of situation, and sloppiness is inevitable.

Even with all these actual and potential failures, there have been no successful terrorist attacks against airplanes since 9/11. If there were lots of terrorists just waiting for us to let our guard down to destroy American planes, we would have seen attacks — attempted or successful — after all these years of screening failures. No one has hijacked a plane with a knife or a gun since 9/11. Not a single plane has blown up due to terrorism.

Terrorists are much rarer than we think, and launching a terrorist plot is much more difficult than we think. I understand this conclusion is counterintuitive, and contrary to the fearmongering we hear every day from our political leaders. But it’s what the data shows.

This isn’t to say that we can do away with airport security altogether. We need some security to dissuade the stupid or impulsive, but any more is a waste of money. The very rare smart terrorists are going to be able to bypass whatever we implement or choose an easier target. The more common stupid terrorists are going to be stopped by whatever measures we implement.

Smart terrorists are very rare, and we’re going to have to deal with them in two ways. One, we need vigilant passengers — that’s what protected us from both the shoe and the underwear bombers. And two, we’re going to need good intelligence and investigation — that’s how we caught the liquid bombers in their London apartments.

The real problem with airport security is that it’s only effective if the terrorists target airplanes. I generally am opposed to security measures that require us to correctly guess the terrorists’ tactics and targets. If we detect solids, the terrorists will use liquids. If we defend airports, they bomb movie theaters. It’s a lousy game to play, because we can’t win.

We should demand better results out of the TSA, but we should also recognize that the actual risk doesn’t justify their $7 billion budget. I’d rather see that money spent on intelligence and investigation — security that doesn’t require us to guess the next terrorist tactic and target, and works regardless of what the terrorists are planning next.

This essay previously appeared on CNN.com.