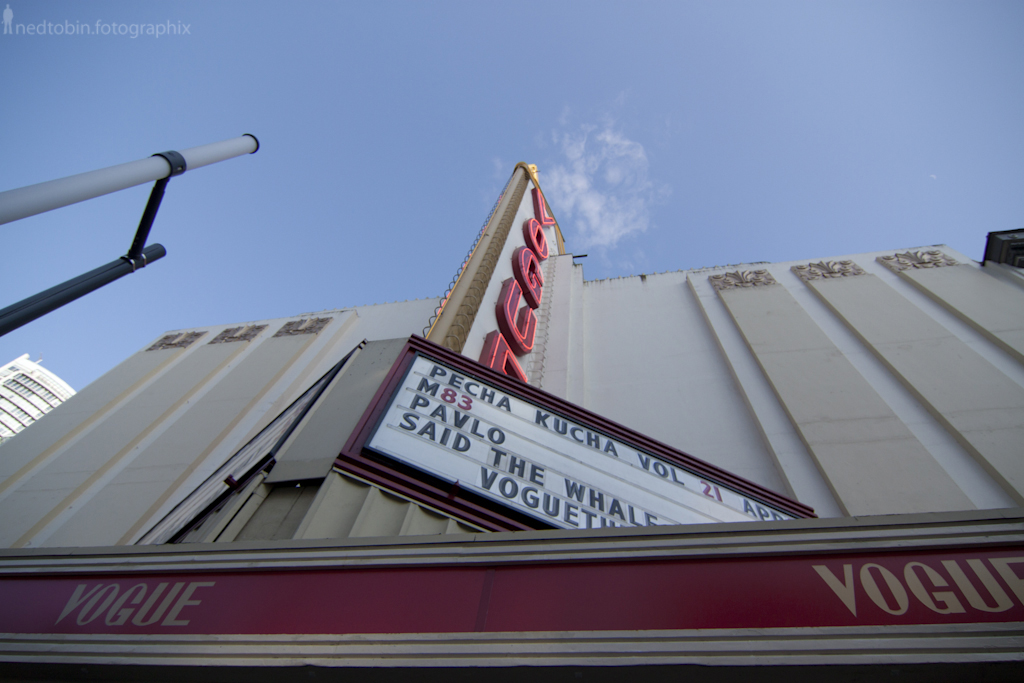 The 21st edition of Pecha Kucha Night Vancouver was, as expected, a great success again. The night was filled with many inspiring presenters who offered great advice, insight into their creative processes, and expositions of their world renowned work. 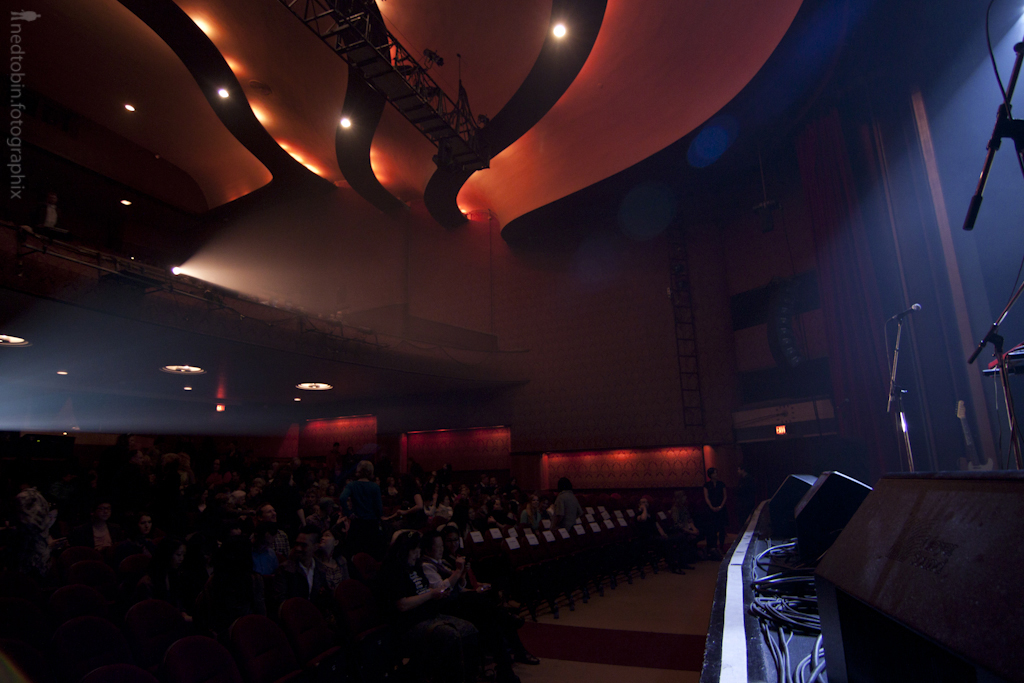 As always, Steven Cox of Cause and Affect hosted the event. I found it amazing that Pecha Kucha is now at 518 different cities around the world. When we covered PKN Vancouver #18 in Nov, 2011, it had been hosted in 449 cities. Clearly, it’s growing and growing fast. 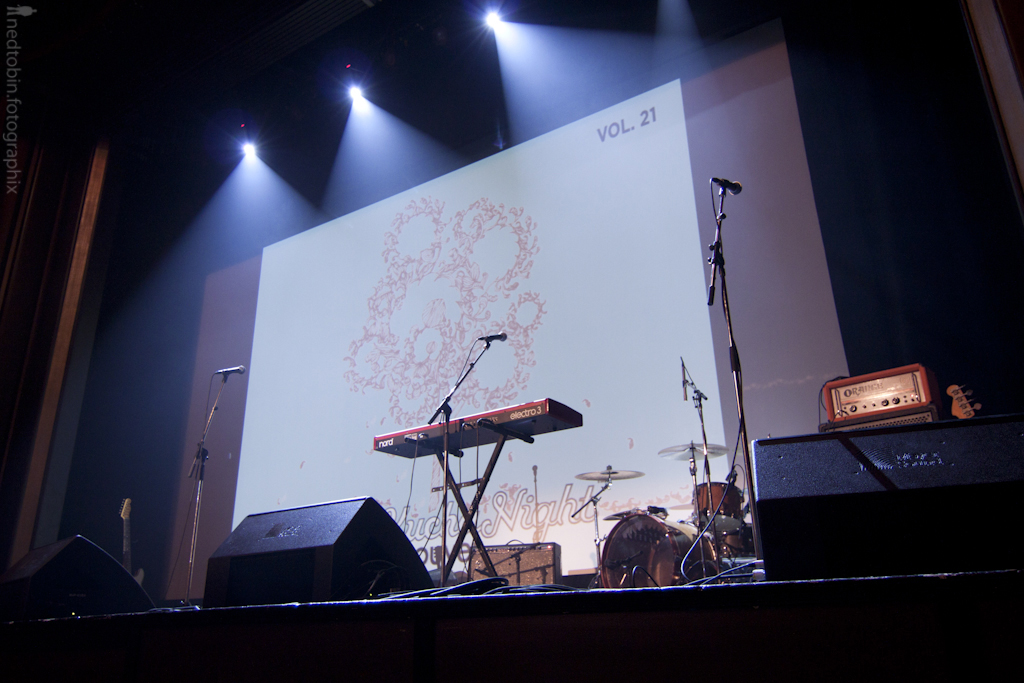 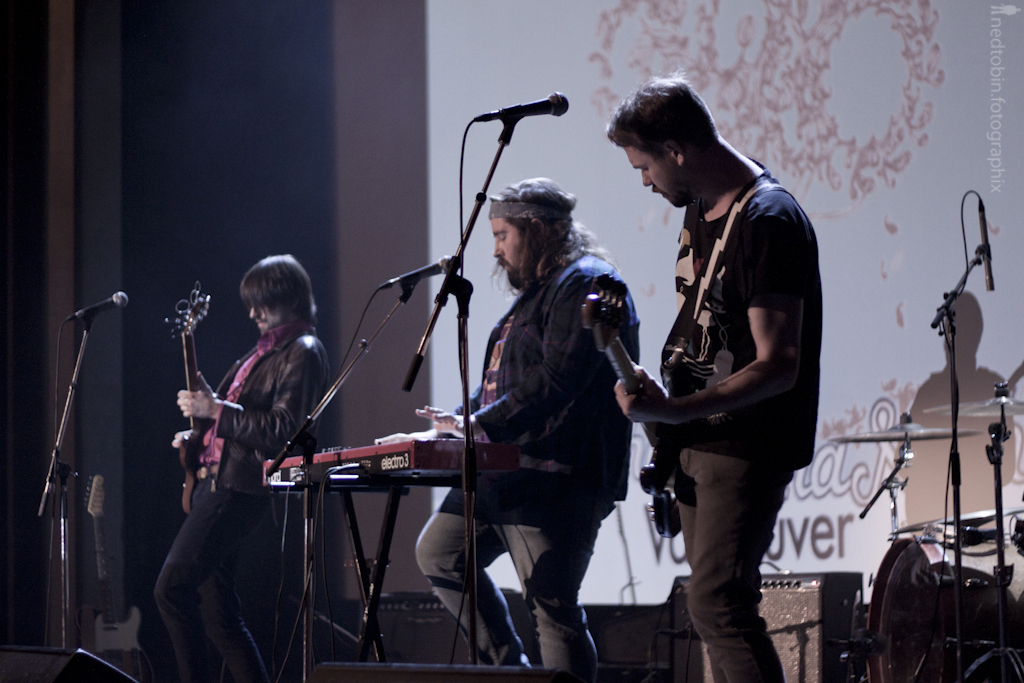 The night started off, as it always does, with a band from Secret Study, Bend Sinister, who were pretty loud (as Steven claimed) and pretty awesome. I enjoyed every second of it. 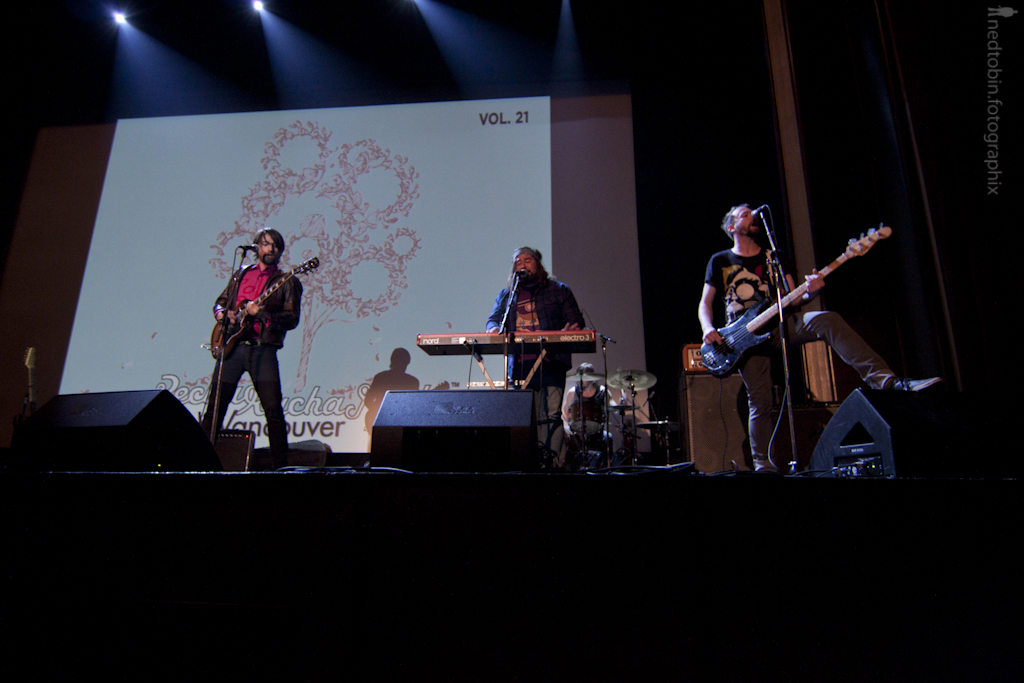 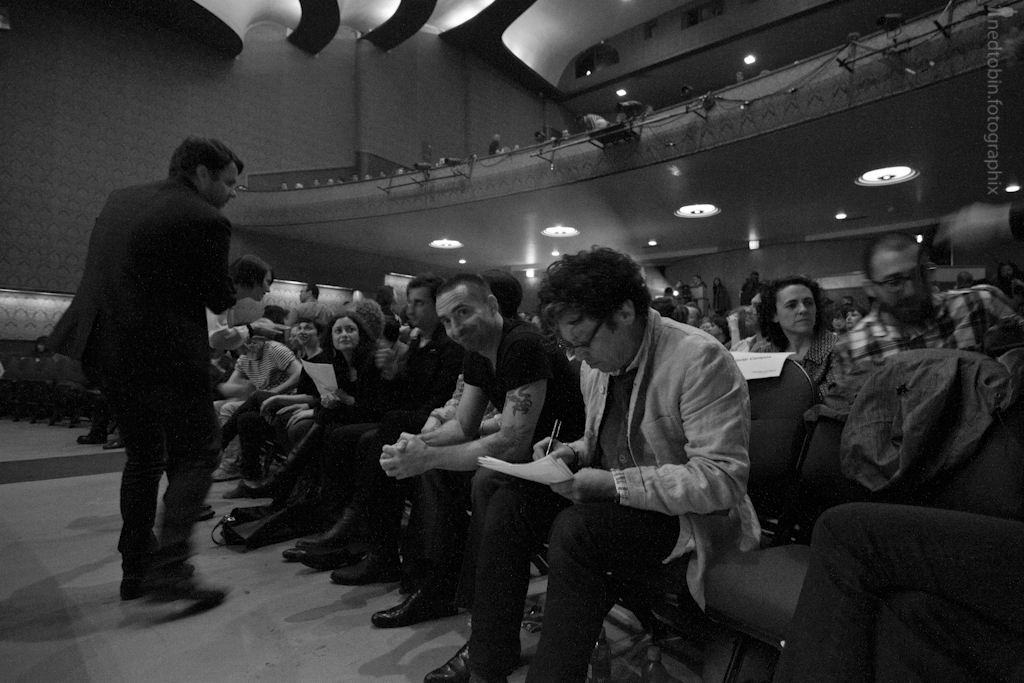 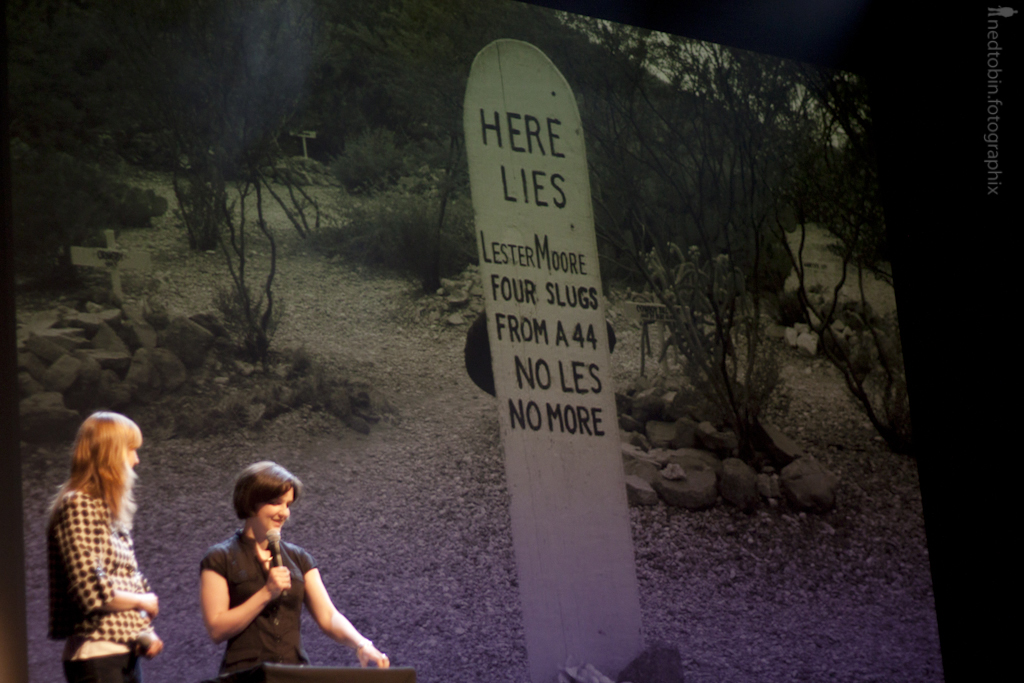 Lisa Parker and Sara Barron of Community Studio had an interesting talk describing their efforts on Vancouver Island as a volunteer based community organization to help aid creatives in completing their community projects. These kind of efforts are always noble, and often go unnoticed, so it was nice to hear them talk about their project. Clearly, their impact on the community was a positive one. 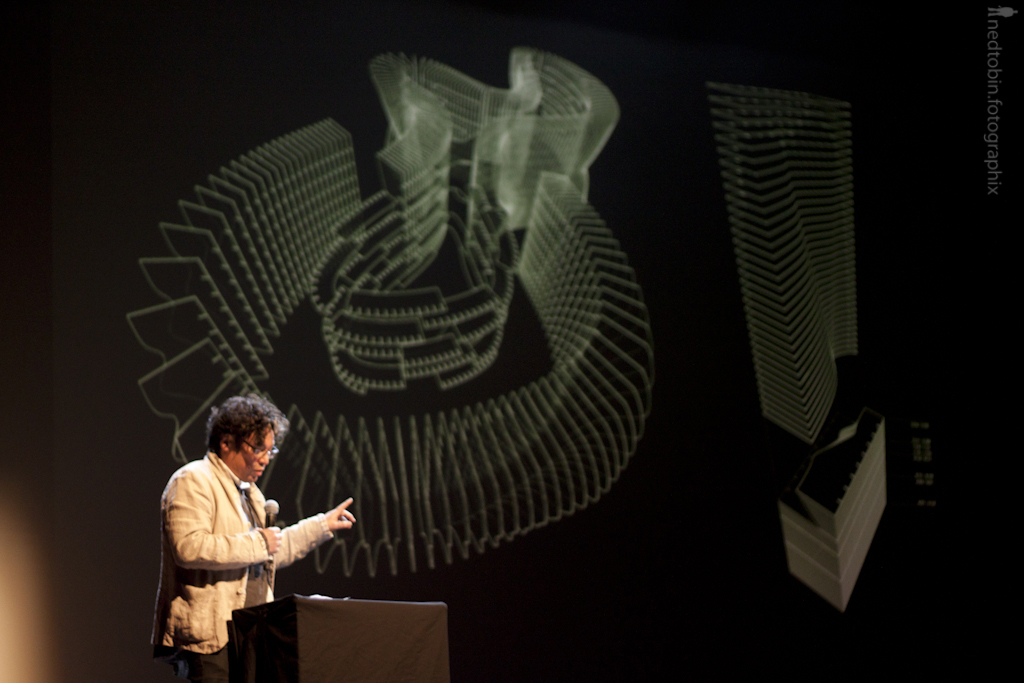 Javier Campos of Campos Leckie Studio was a very humble designer who showed us some amazing creations of his, that were perticularly enjoyable because of their open design, and fan look that was very modern and integrated with the environment. A lot of the designs that are shown at these events are really geared towards the environment, and how to keep the building as fully integrated and friendly to the environment as possible, utilizing the natural heating and lighting from the sun and wind tunnels. 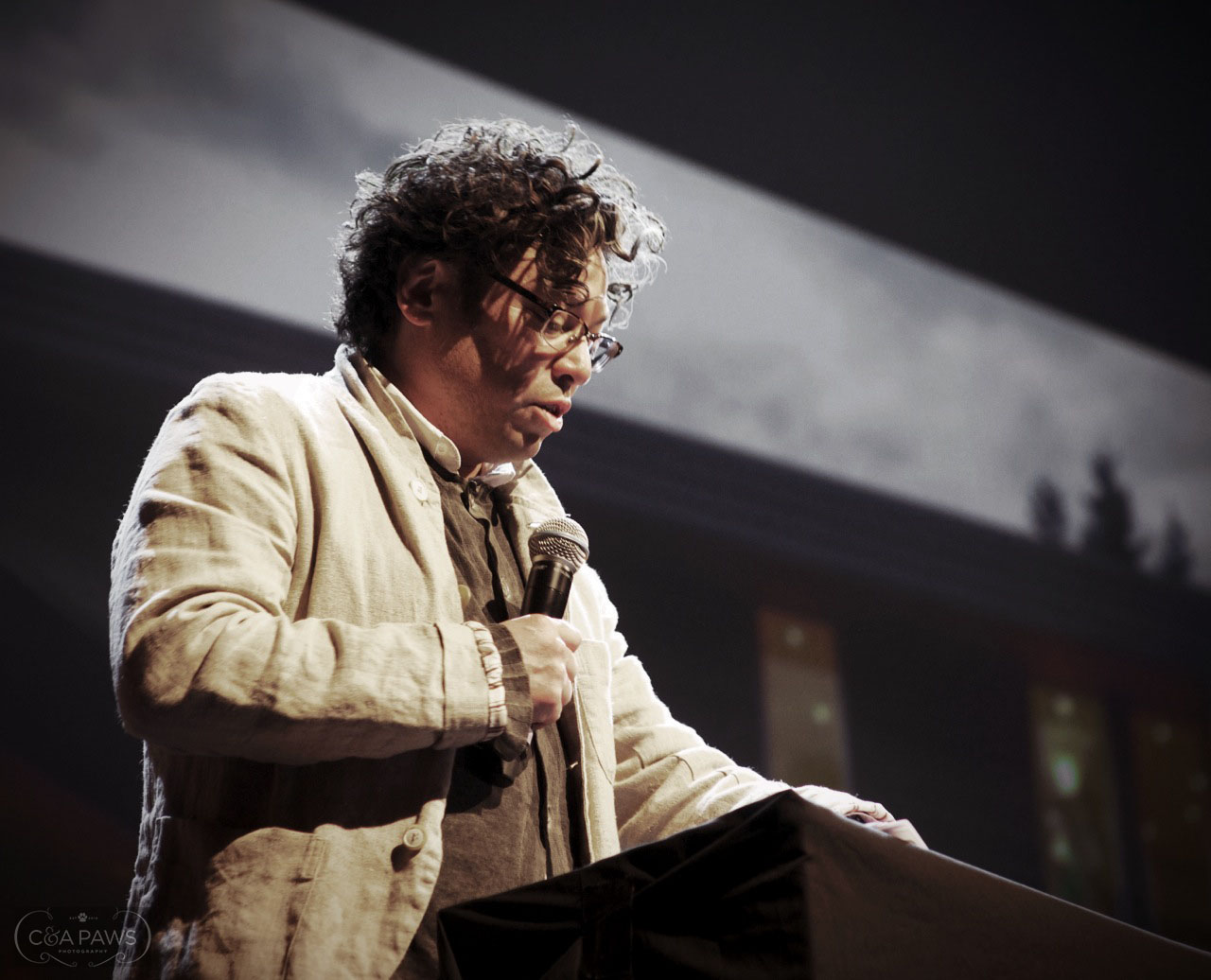 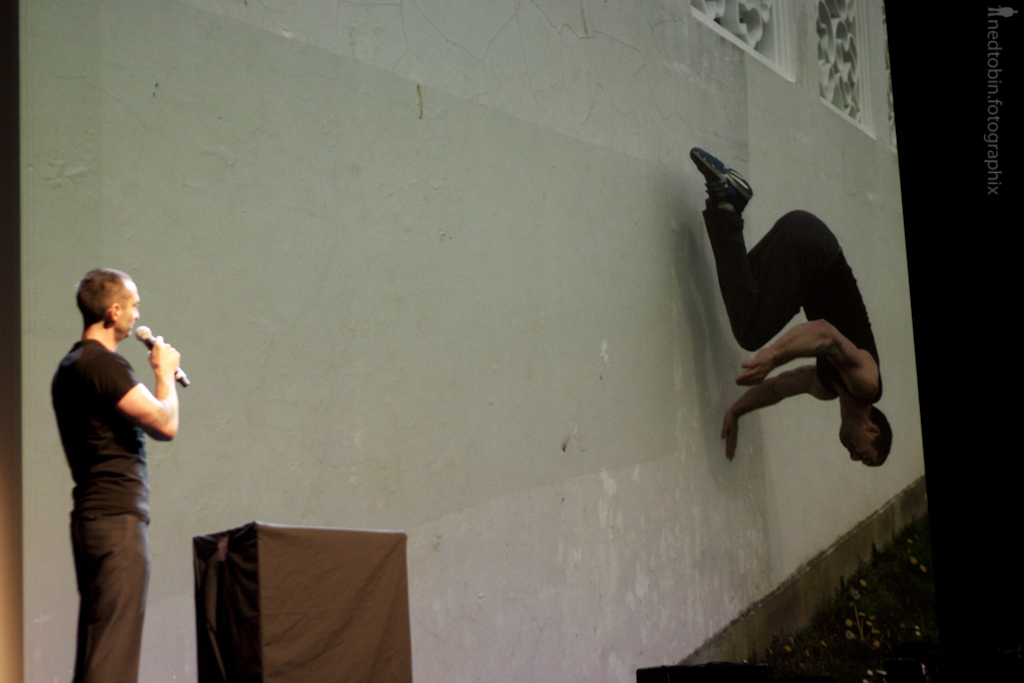 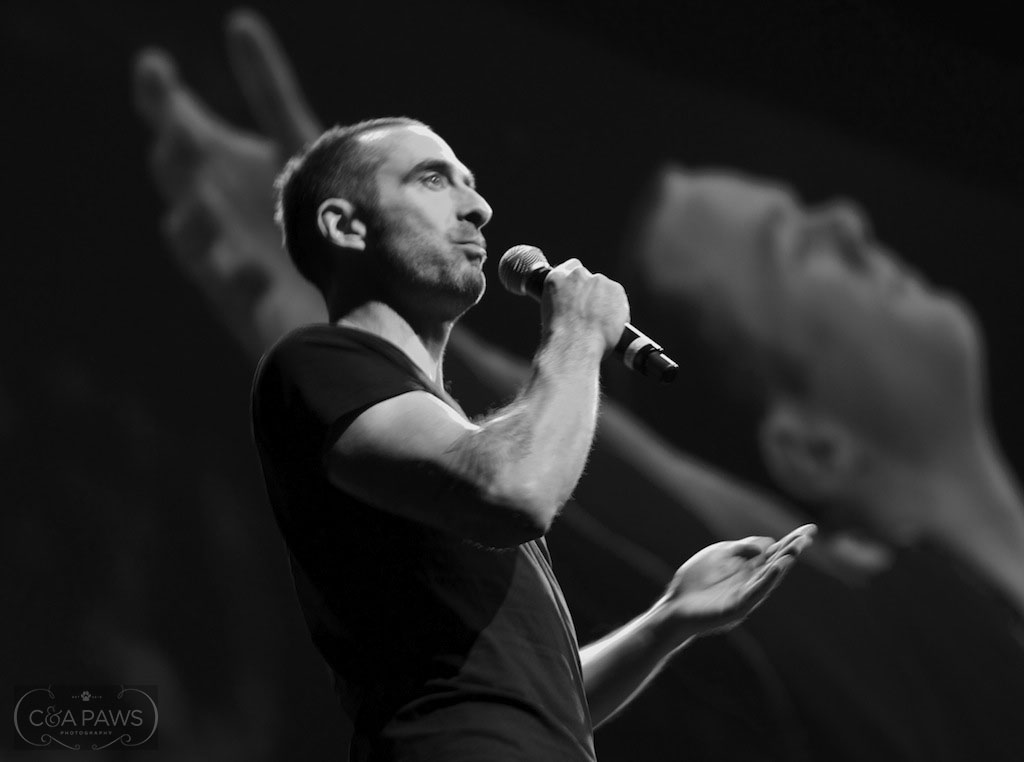 Johnny Taylor did a really inspiring speech about his creative process where he gave the punch line to the photographs that he was showing. I liked this format as a change for it offered the user to interact with the photographs and have time to capture the full intensity of the image, and what Johnny had hoped to portray with it. Getting a few photographs of the artists living space, and his process are always inspirational. Fun fact is that Johnny’s art space is above Save-On-Meats downtown Vancouver [stalk him there]. 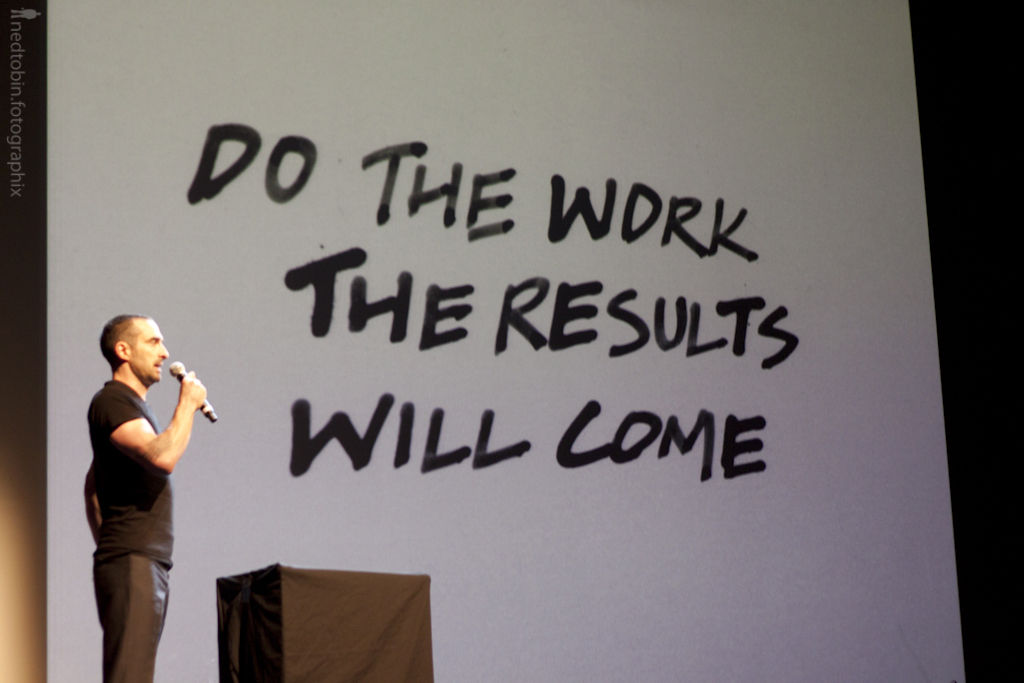 I had a laugh to myself a little bit when Johnny had a slide where he highlighted a few quotes from a “review” in an attempt to show that these fancy words some reviewers use to glamorize art and sound fancy isn’t necessary, and when Alexandra Kenyon and Alex Buss of Tangential Vancouverism came up, I think they added -ism to almost everything they were doing. However, I really respected their approach to looking at Vancouver with a different eye, one that sees the landscape as a playground to create some amazing features to really set the architecture apart from anywhere else. I hope they succeed [or continue to] in what they’re doing, for this kind of creating is always a welcome addition to a city in the midst of an already growing beautification process. 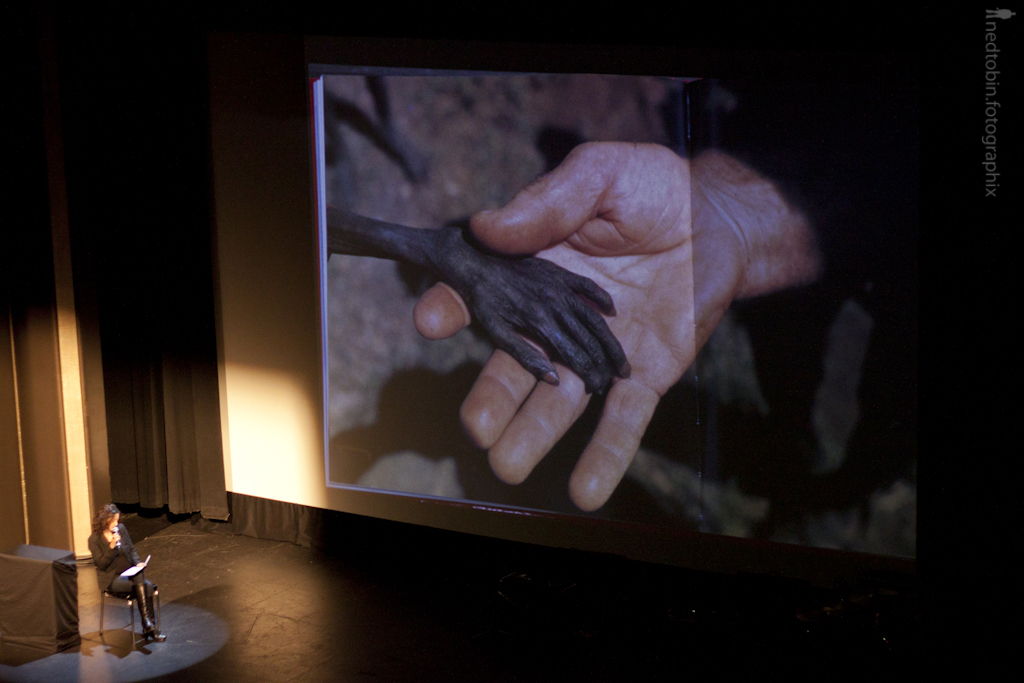 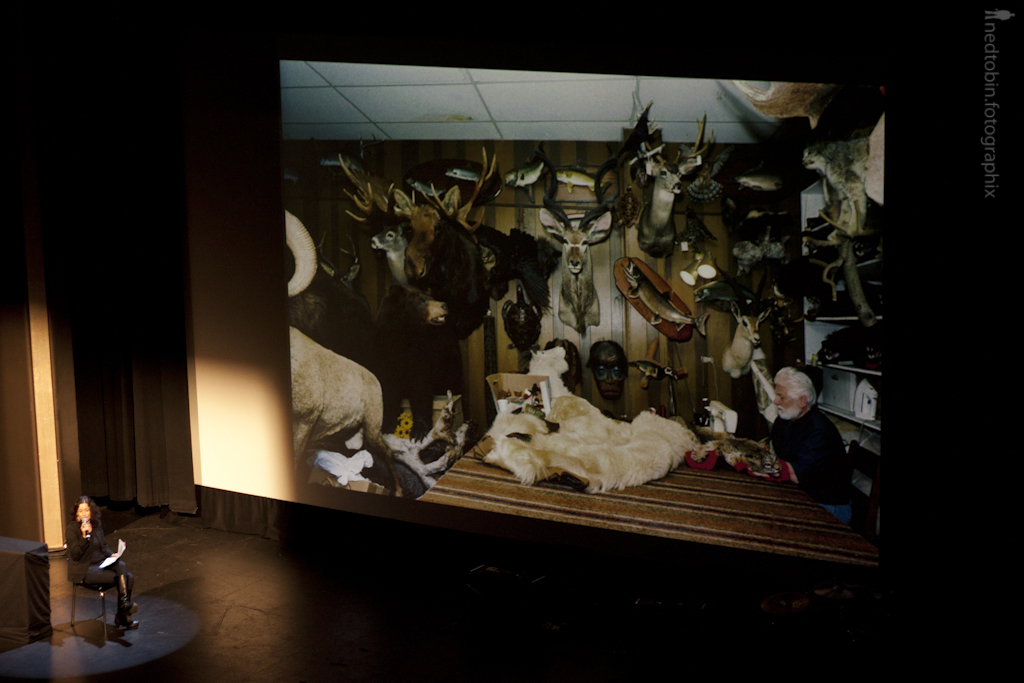 Before the show started, Dina Goldstein asked me if I was taking the photographs for the event. I responded with a big smile and “Yes! I will try not to take too many photographs!” [thinking I was funny, and trying not to scare her]. Her response was “No, no, take as much as you can! More the better!” Anybody that says this is a friend in my books. Her talk solidified my warm thoughts about her. She spoke of her process through the years of finding what her direction as a photographer is, from traveling the world as a journalist to what she tends towards now: a fashion or editorial photographer. Seeing a photographers photographs projected onto a huge screen is always enjoyable, even if it’s only for 20 seconds at a time. 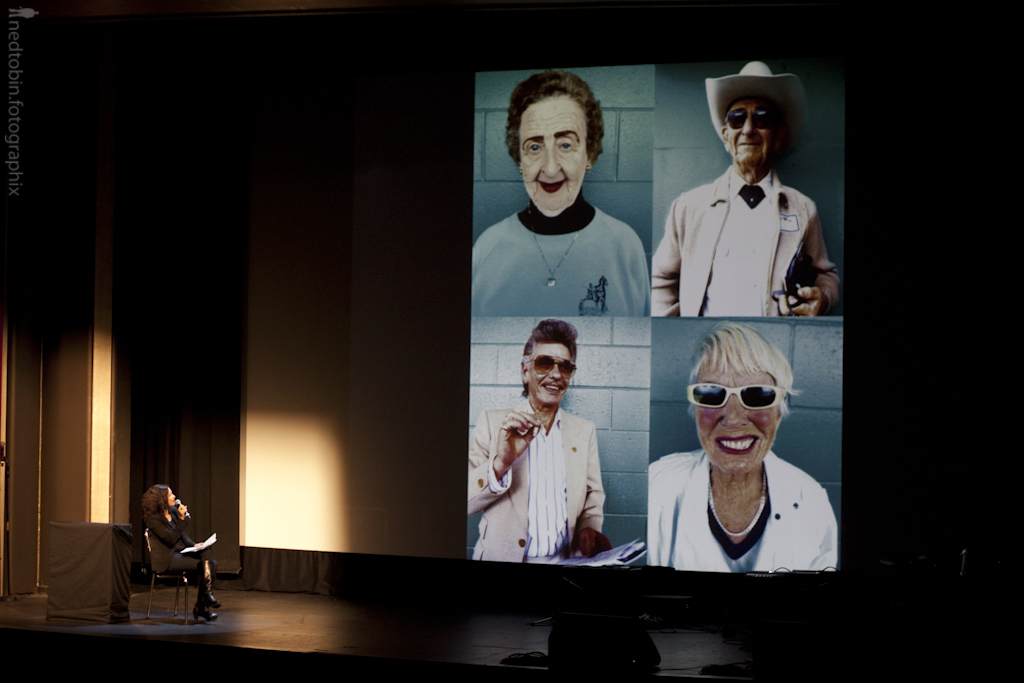 Brian Hendricks of Hobo Magazine described his lifes path that has lead him to the stage for the 21st PKN. As a teacher in Victoria he pioneered initiatives and creative projects to engage the students in thinking outside the box, with life and originality. He then came over to Vancouver where he is now a writer, and something tells me part owner, of Hobo Magazine. 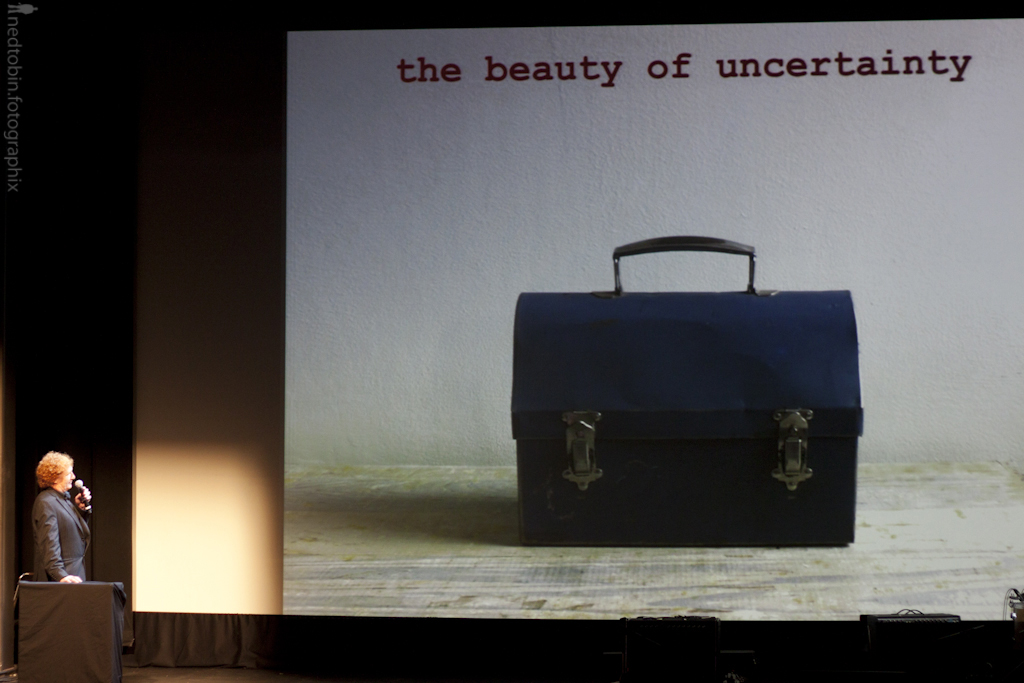 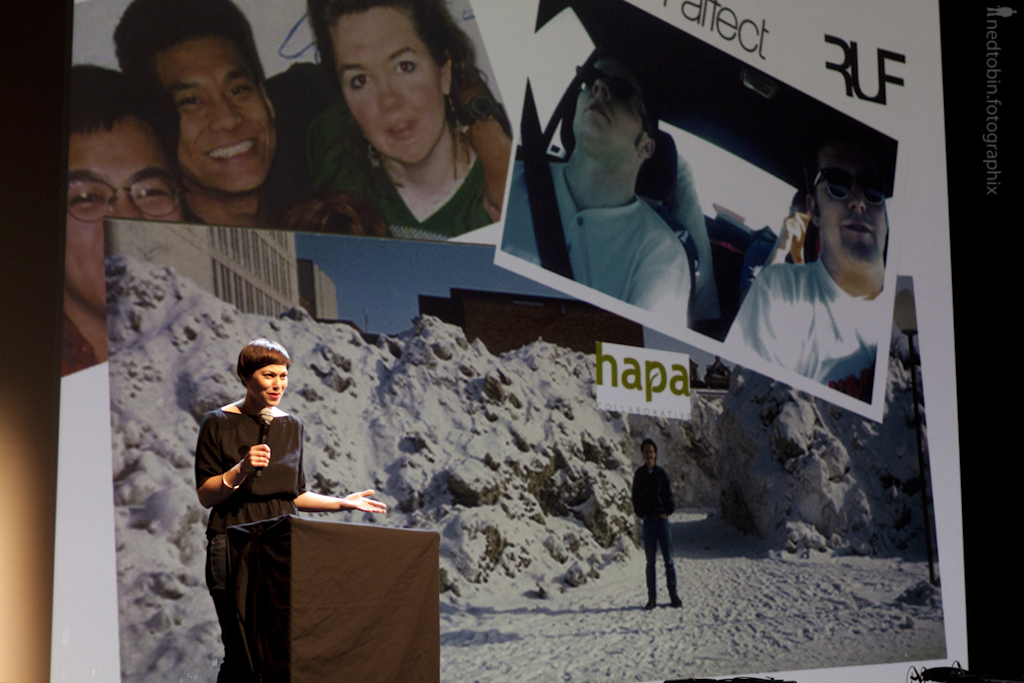 The architect from Winnipeg, Marianne Amodio chose to dedicate most of her talk to illuminating the plethora of Winnipeg architects and designers that have presented at Pecha Kucha Night in Vancouver previously [and at 21]. I enjoyed her enthusiasm not only for her fellow alumni, but also for her field of expertise as well. 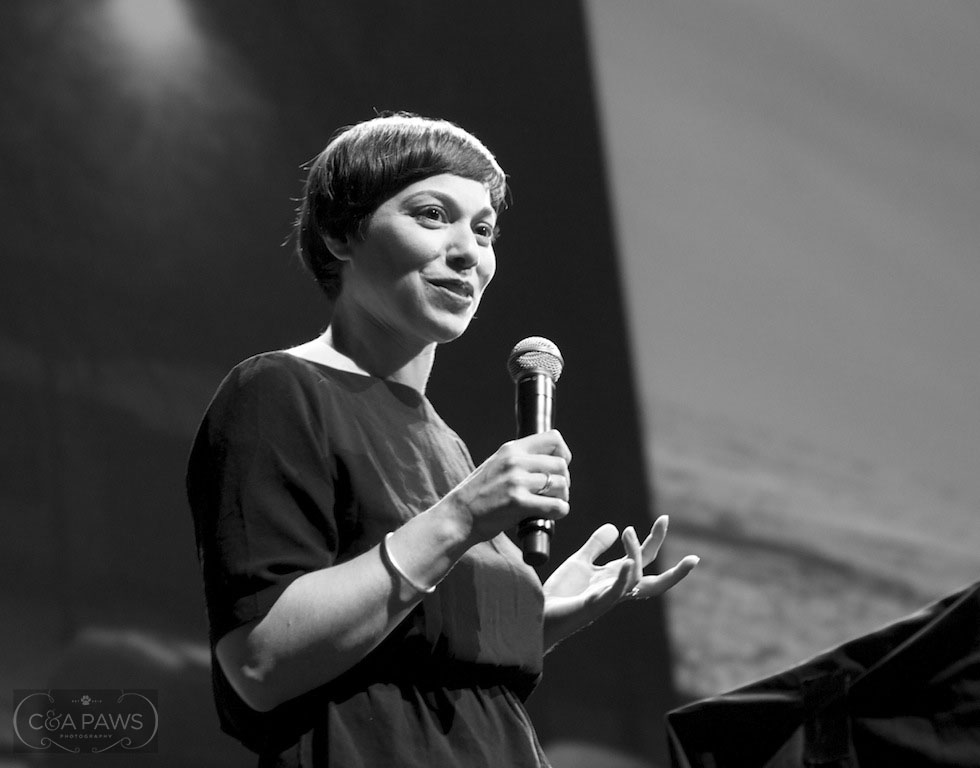 Andy Dixon, a local artist of many talents, talked about what it means to not have per-conceived notions of the art you are creating. More-so, he talked about the idea of getting right to the center of the creative nerve to create something that is entirely in the moment, in the now, and in essence raw. Thinking about this has provided me with some very interesting thoughts about what art really is, and what makes art, but that’s a discussion for a different time. 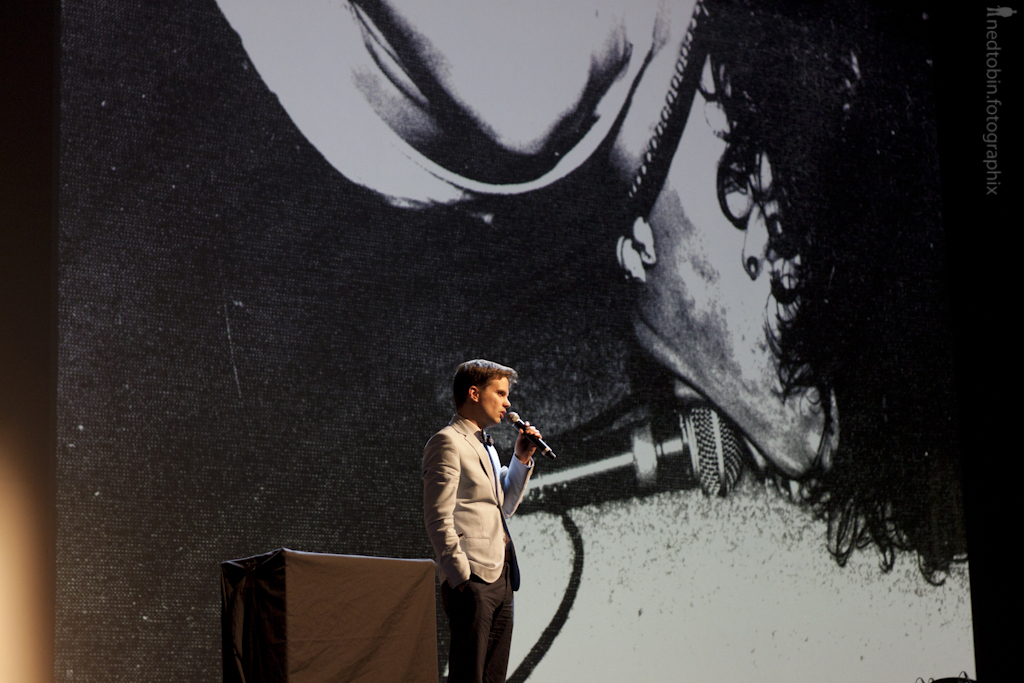 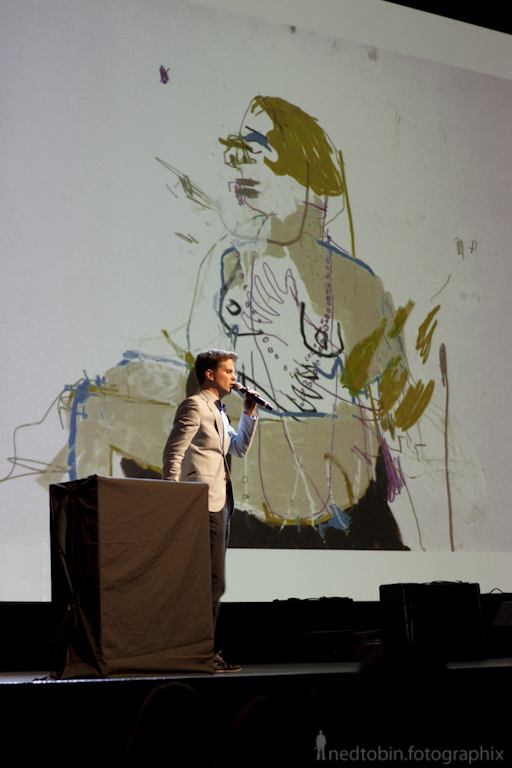 Designer Craig Stanghetta introduced us to his method he takes as a designer, which has garnered him a  lot of attention in the local Vancouver restaurant scene as the designer you want to have. I enjoyed Craigs approach to designing where everything was original, no corners were cut. He talked about how horrible it is to walk into a place and you are immediately greeted with Ikea furniture and plastic fixtures. 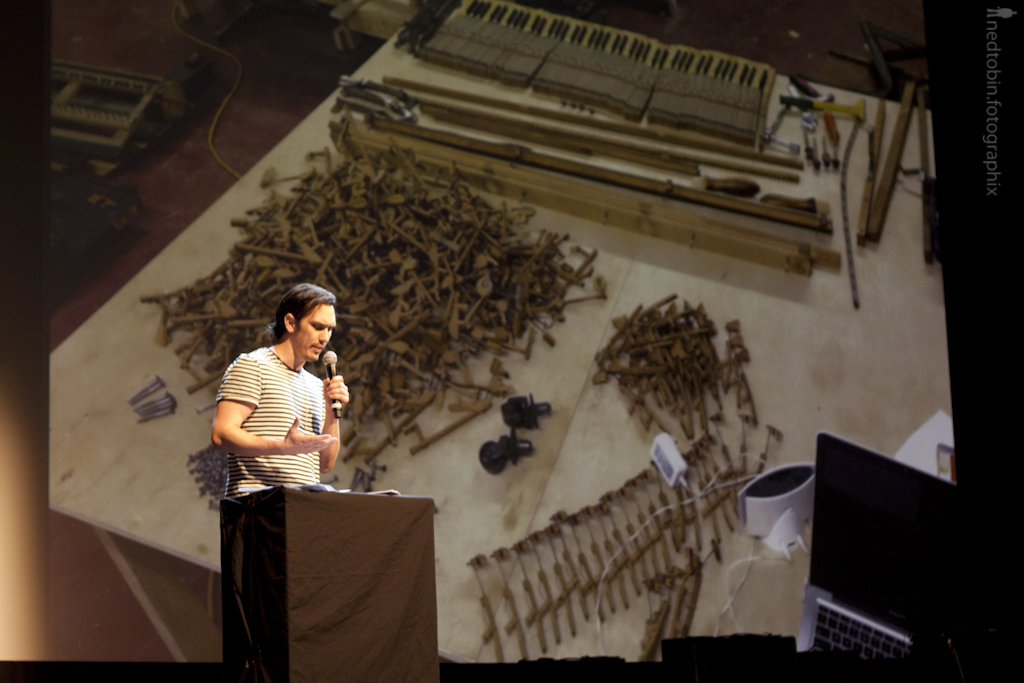 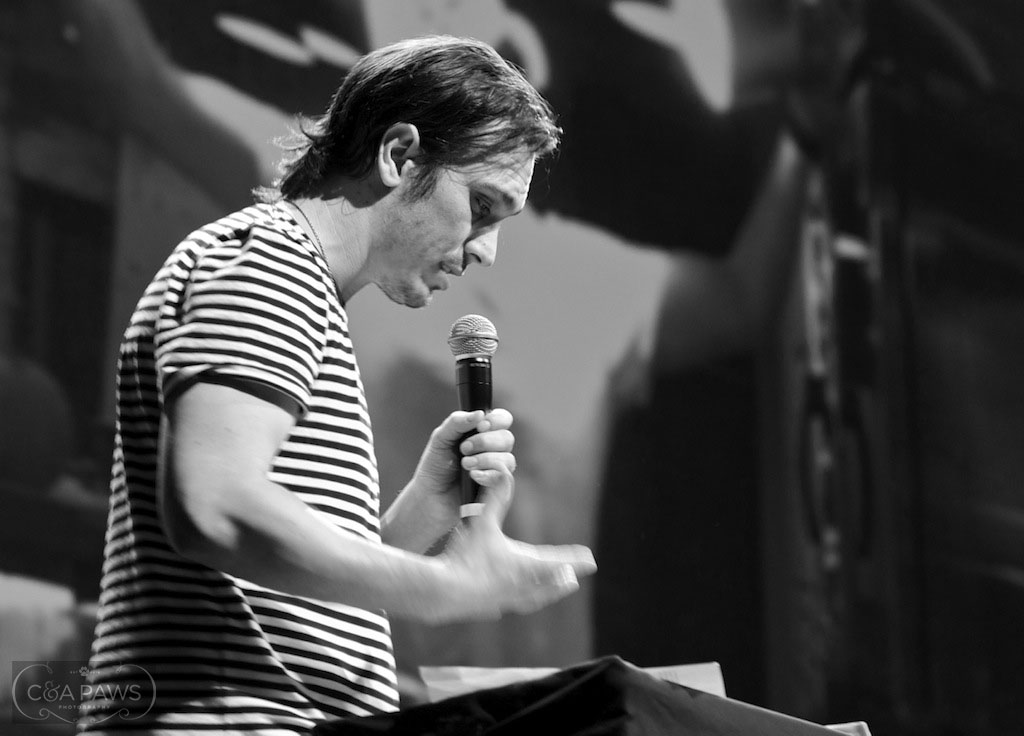 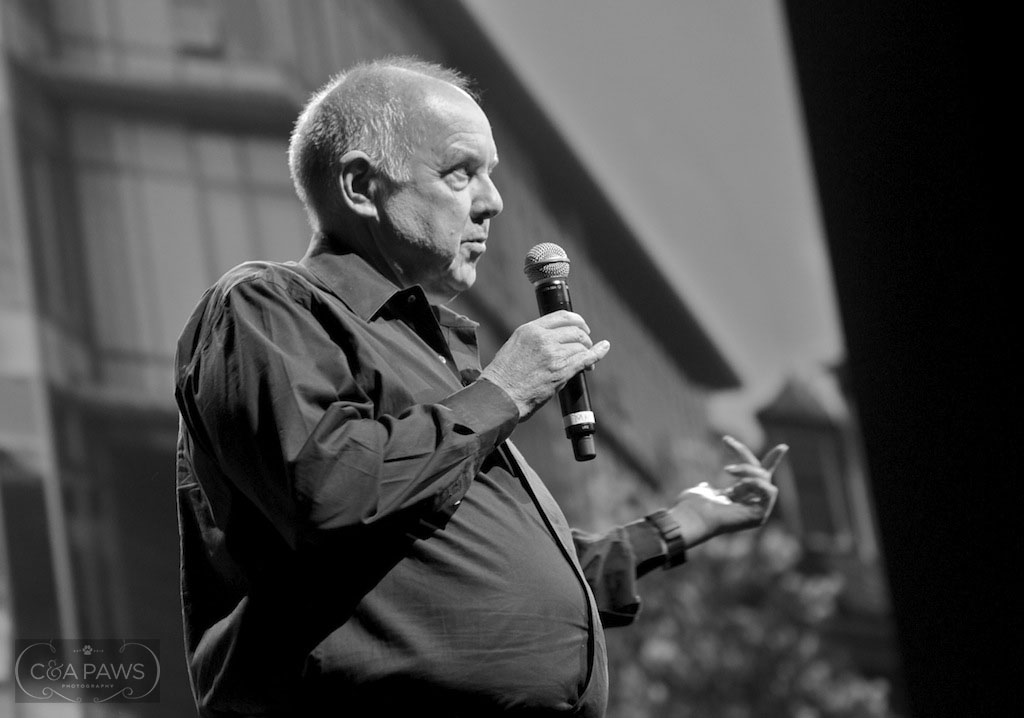 The man behind OPUS Hotels, and the Trilogy Group of Companies, John Evans, was a very interesting speaker who gave us his history, in a nutshell. He talked about some of the trails of his life, giving us an insight into some of the more personal things in his life, which was really quite grounding. No doubt it took a whole lot of guts for John to step up to the microphone at PKN 21. He talked about how beautiful Greece is, which is something I’ve heard a lot before, and when heard from a man who has multiple multi-million dollar properties all around the world, I’d suspect it has something to it. 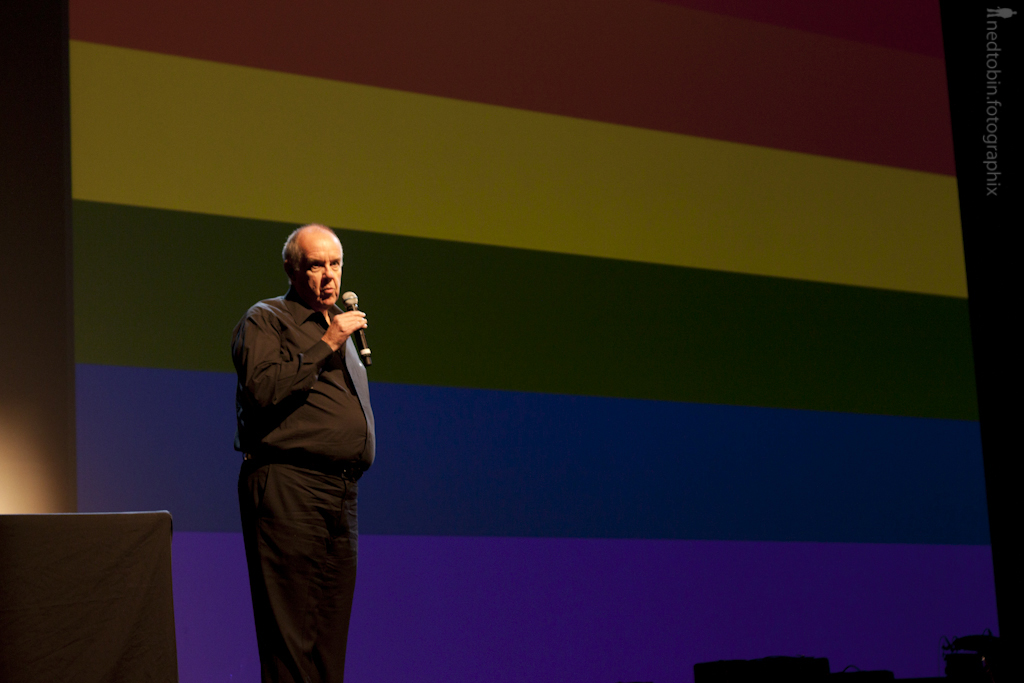 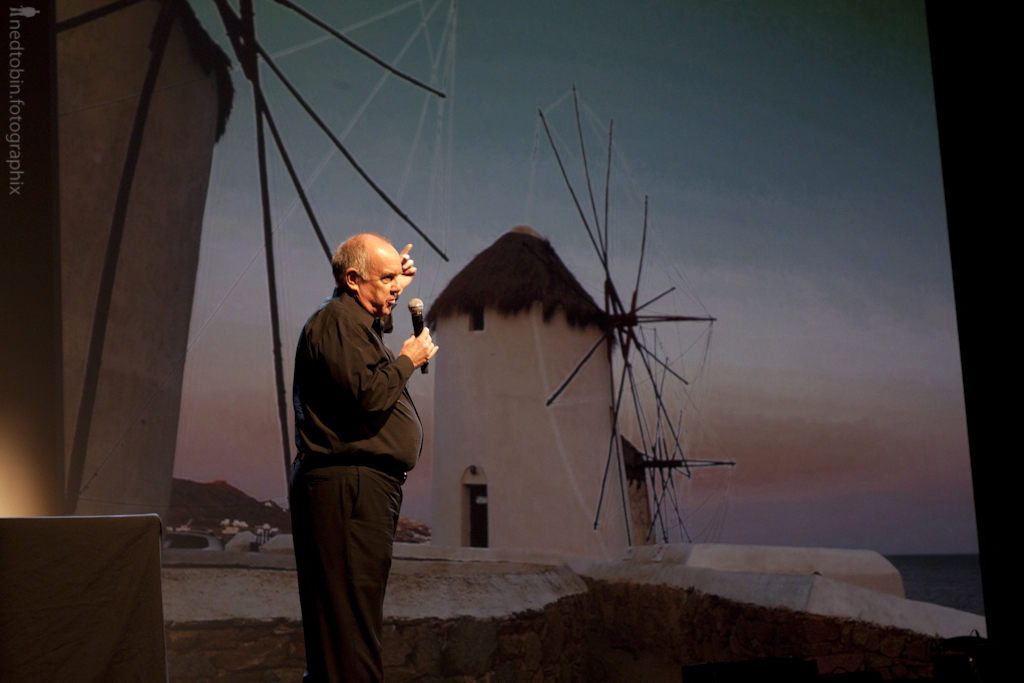 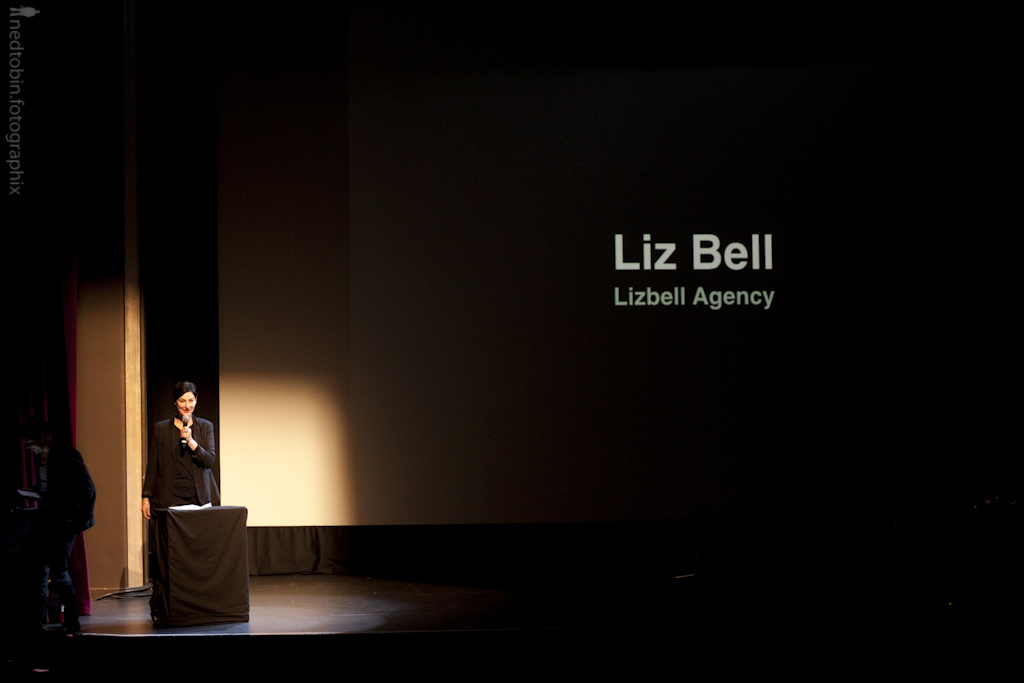 I have seen Liz Bell around town before, at various functions and fashion shows but had never known who she was or what she did. Well, it turns out that she is one of Canada’s premier scouting agencies for models. It all makes sense. I was actually amazed to hear a man walk away from the show saying “that’s disgusting” when Liz showed a photo of a younger model who was fairly thin. Anyways, Liz was fairly pleasant, and talked about her process to finding talent, and how exciting it always is for her to scout new talent. She was very proud of one model who she had found at ~17 years old, and has watched her blossom into a Victoria’s Secret model. 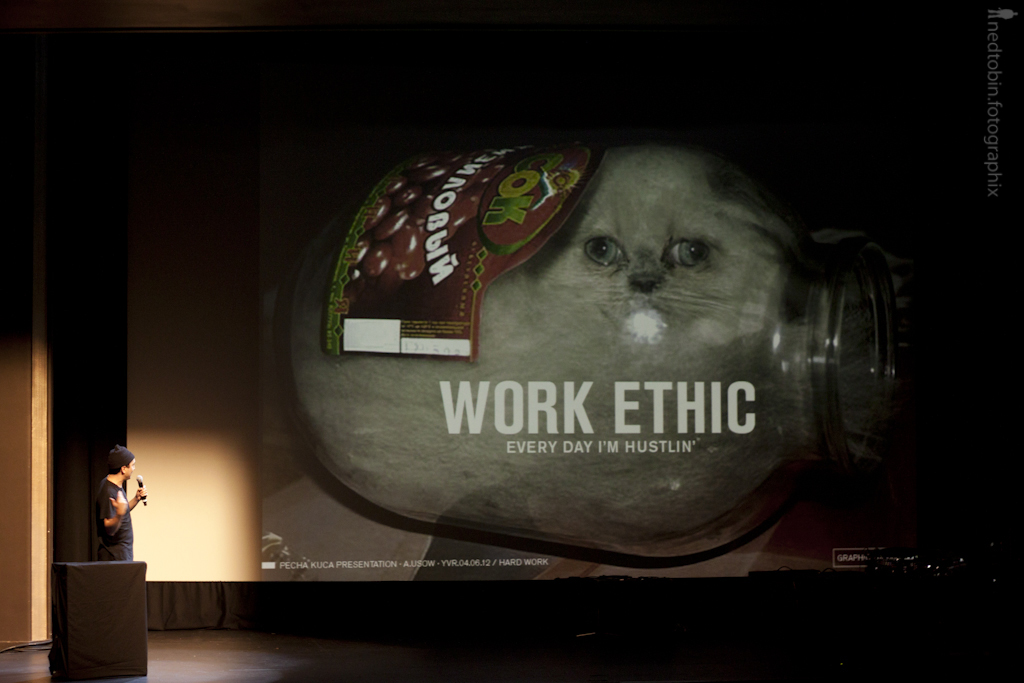 The final presenter was Alex Usow, a local entrepreneur and graphic designer. He is the man behind places you may have heard of like Catalog Gallery, Sea Monstr Sushi, Sharks & Happers, and Rhek Creative. Alex talked about how important it is for him to do what he loves, and do it with passion. He stressed if you’re doing something your not enjoying, just stop! I fully support this mentality and have quoted that many times since the show. I also liked how Alex stressed how important it is for himself to have his friends and the people he loved around him. How much inspiration they can provide and support they can give to all things in life. He made it clear that without them, life wouldn’t be nearly as good and successful. 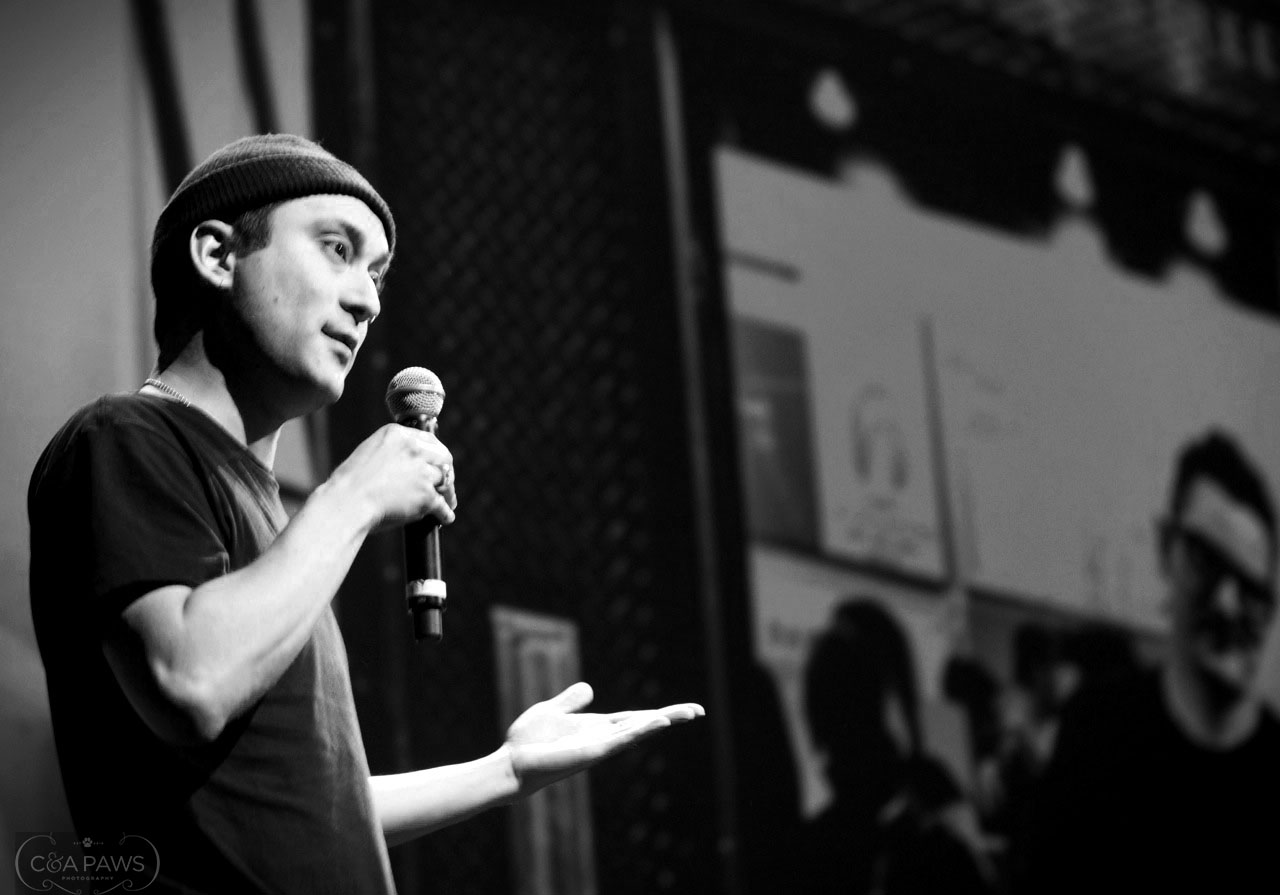 As always, I came away from PKN #21 with a renewed sense of culture and community within Vancouver, as well as increased enthusiasm for my own pursuits within my own life. If you have never been, I highly suggest you get your tickets as soon as possible for the next Pecha Kucha Night Vancouver, they have never let me down, and I am confident they will continue to impress. 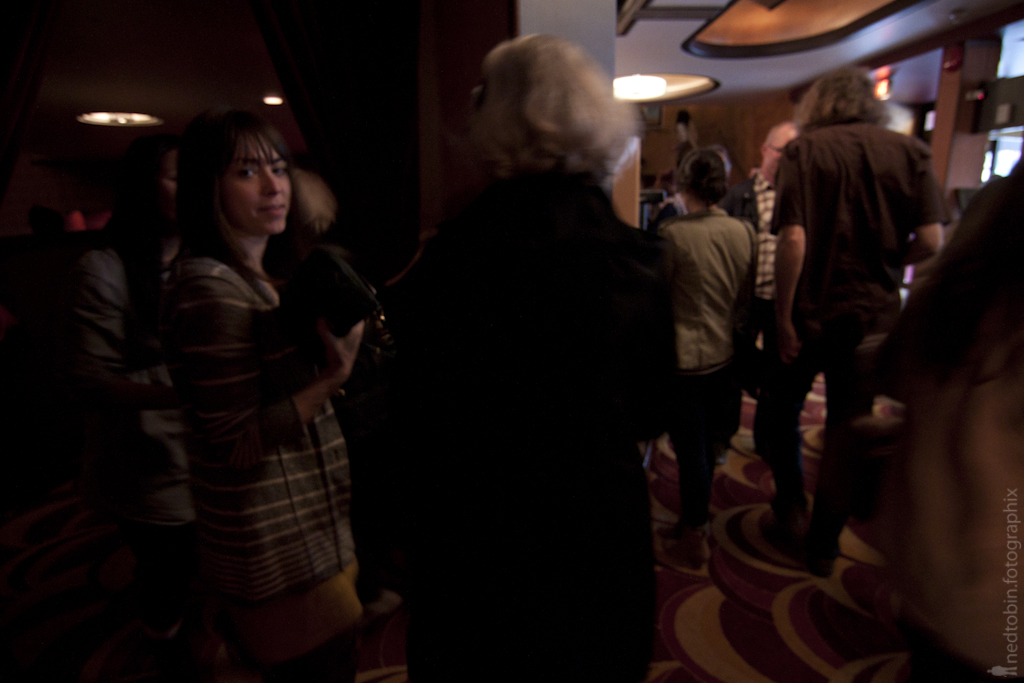 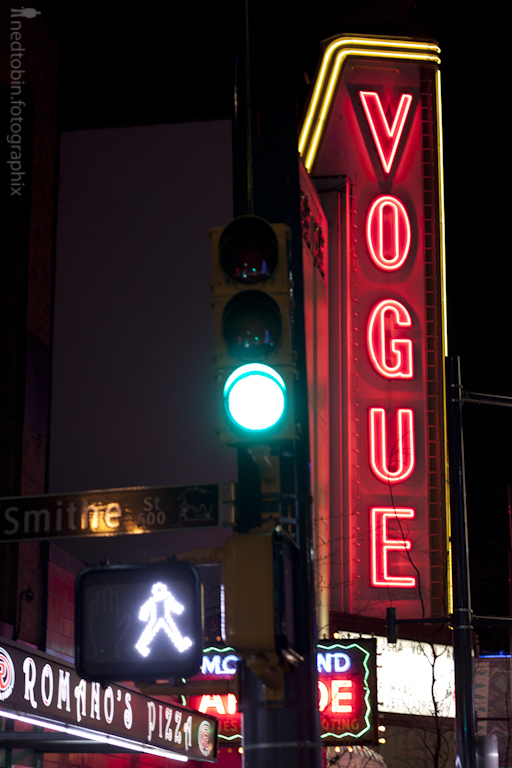