Recently I’ve made a trip on the great Pearl, which is among Norwegian Cruise Line’s fleet, into the Caribbean where we stopped at Samana in Dominican Republic, St. Thomas and Tortola in the Virgin Islands, and finally for a day in the sun at the Great Stirrup Cay just outside of Miami. Overall the trip was great, free food, entertainment to keep me from going stir crazy, and day excursions into places that were exotic and warm. Alcohol was expensive ( to be expected ) and a lot of overweight, and old people, which I suppose is also to be expected. 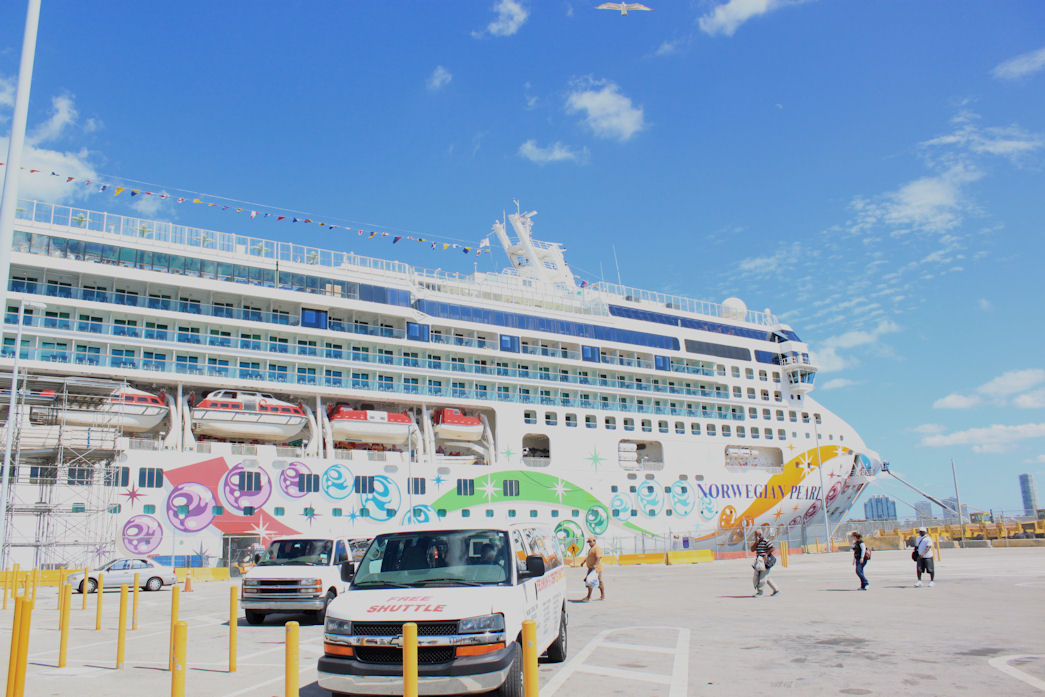 The first day was hectic, loading onto the ship, standing in line, getting our rooms, finding our way around the boat, and then finally falling asleep on a new bed. Yai, were on a cruise. 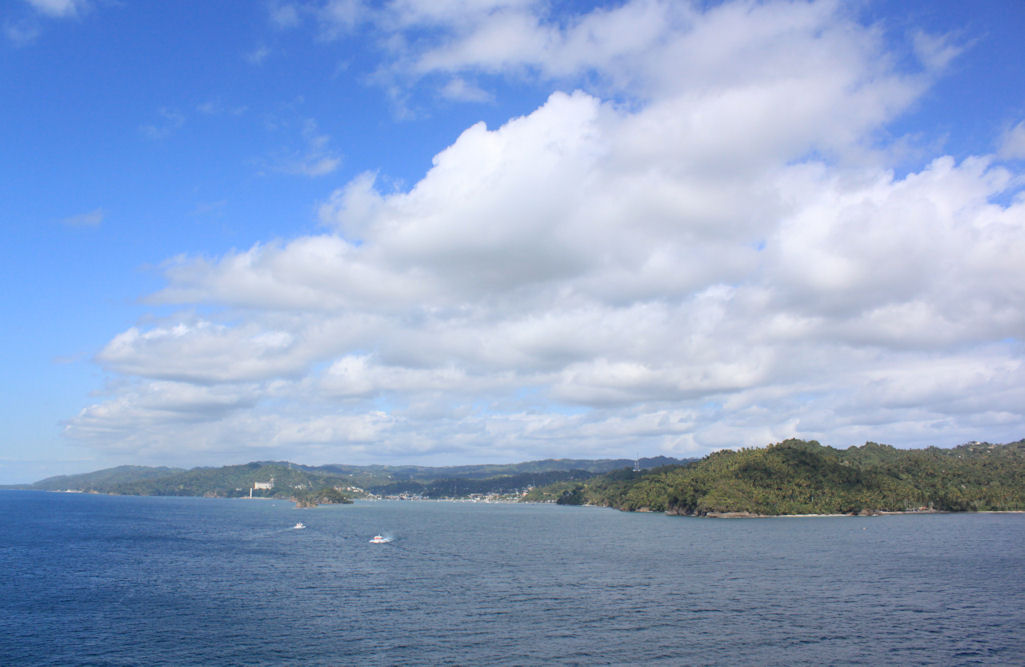 It took one full day before we reached the first town, Samana, located in the Dominican Republic, which incidentally is on the same island as Haiti. Maybe I should have already known this…. When we got there, we had to tender to land (take a smaller boat from ship into the dock). Yes, more waiting in line, but not to much. We were slow starters, so we were among the last to go. 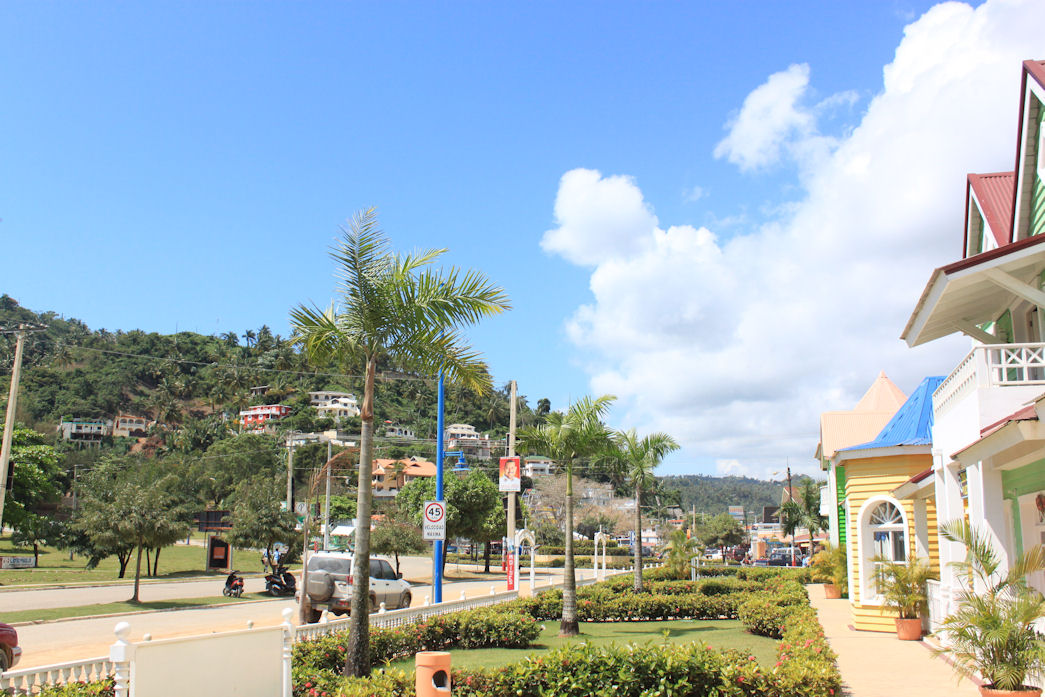 As it turned out, there wasn’t too much to see in the small town, but a lot to get haggled about. The instant we stepped outside the gates of NCL, it was haggler after haggler, asking us if we needed a ride to the water falls, into town, scooter etc. Then we walked another hundred paces, and were into the nick-nacks selling. “Brother, this one is for you, got the right shirt for you here. Brother where are you from? Oh I have a sister living there. yes yes.” At one point, they were blocking the road so that we couldn’t walk any further until we rather forcefully pushed our way through and continued on. Think moving through a crowded bar but nobody else around. yes. it was fun. My folks bought some very cheap, and very large paintings from the artists. They are pretty.

Next we were off to the new and fairly modern city of St. Thomas, complete with a yacht club, and one with a helicopter on the top of it. 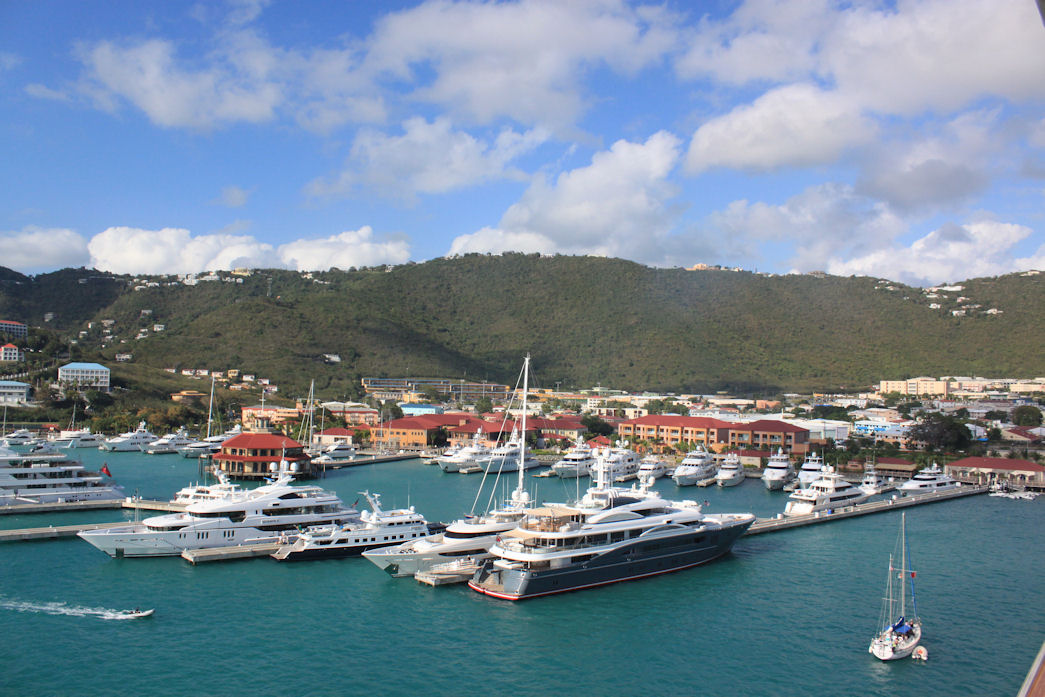 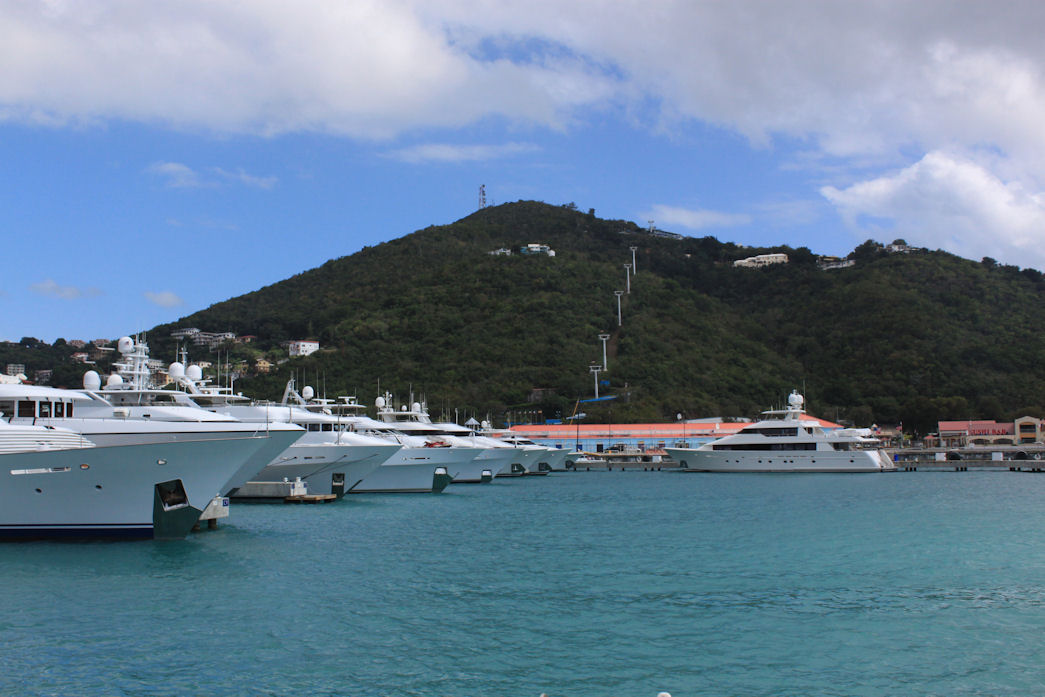 There was even a part of the city named “Yacht City” which was pretty cool to see Louis Vitton and Gucci stores there…. Coming from the poverty we just passed through. I was able to get online at a small place called Hubbly Bubbly Hukka lounge. No, I did not try the Hukka. I think it was $15 for a huke? But, I did buy some beers there at reasonable price, and had a very friendly bartender serving me beers. 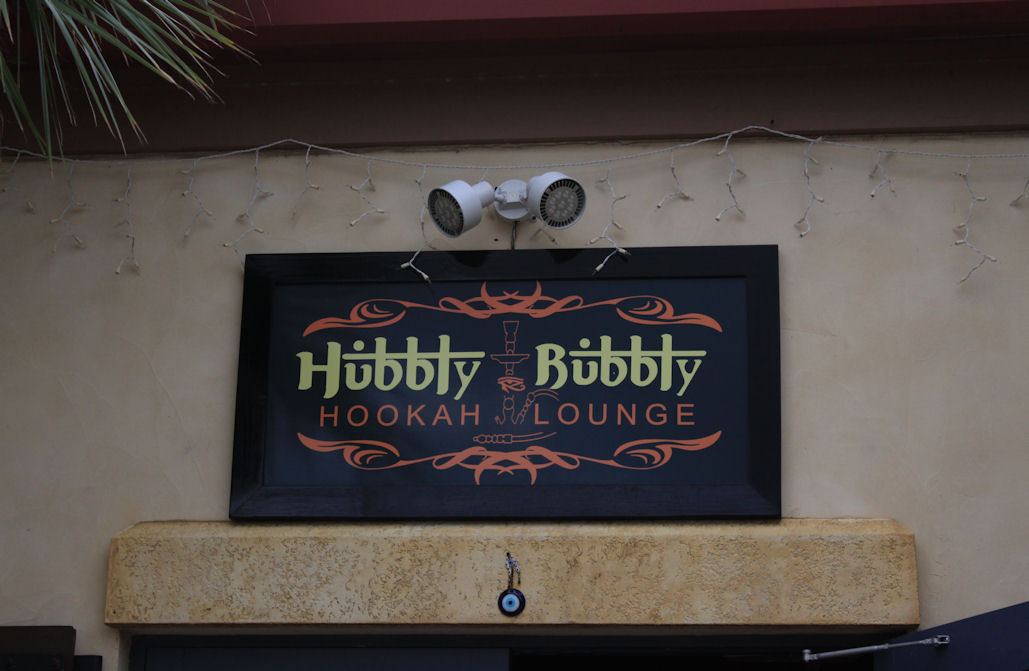 After this day, we headed for Tortuga, another city in and amongst the Virgin Island. It was a less fancy town, possibly smaller, and once again we required a Tender to get into the port. 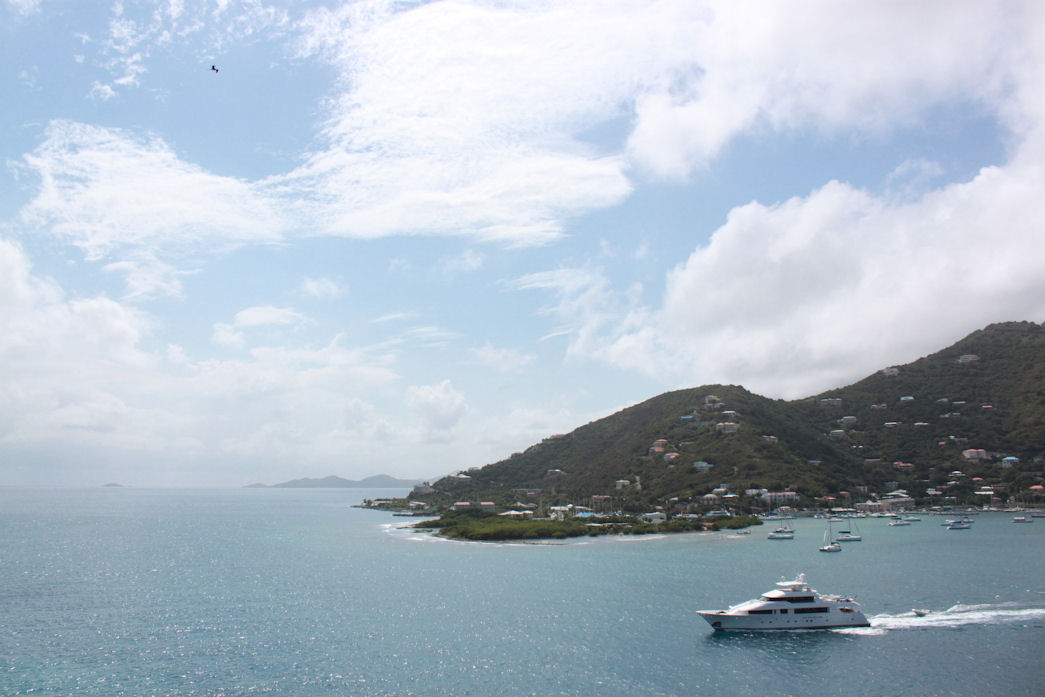 We wandered around for a bit, found a place to sell us Red Stripe Jamaican Beer for $1.50 which were also tall beers! so we pounded a few of those back, and headed back to the boat.

After this, which was our 4th night on the boat, we had a full day of ocean 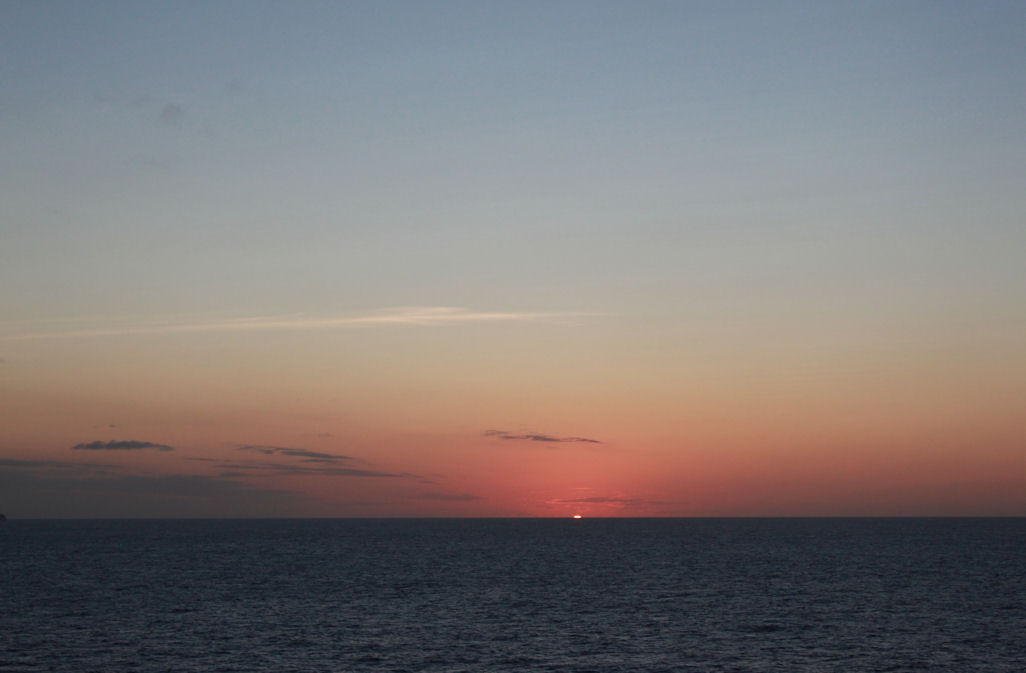 The next day we hit the private beach of Great Stirrup Cay, where we had a full day of sitting on the beach cooking like lobsters (ie. getting red) on beautiful tropical sand and ocean to swim in. We were buying $25 buckets of beer (6 per bucket) and by the time we were to get up and head home, were feeling happy! The brother got up for the first time in a while, and fell right down right away! haha. So funny. One of the lifeguards was right there and laughed along with me and my mother! He was cooked red completely! Poor fellow.

This was our last day full day on the boat, and now I’m sitting here, the next day, on solid land in a Miami hotel right next to the airport, yes there are airplanes going overhead constantly.

Each morning I would get up, head to the all you can eat buffet, and get myself a omelet made, with ham, onions, mushrooms, peppers, and spinach. So good. I’d usually get a eggs bennedict, some bacon and some sausage (turkey and pig) to go with it. Today I also had some french toast. Yum.

After this, it was usually to the tender desk to get a number to be called to take us over to the land, or else sit down in a nice spot on the deck and read my book. I managed to finish off The Satanic Verses by Salman Rushdie, which was a pretty good book. Kinda getting used to his style of writing, and definitely enjoy the dream it takes me on. It was a big book though. I’ve now started The Confessions of an Economic Hit Man by John Perkins, which is turning out to be a very very interesting book. If your interested in how the USA is taking over the world, its a must read.

After this it’d either be lunch time, which was beer if we were on land, or more buffet on the boat. Probably a bit of chicken, salad, and who knows what else. Always yummy, but usually the same selection of a buffet. Near the end, it was kind of hard to face the buffet. Same old thing in a way, but still a lot of selection.

By this time, the family was usually very tired, and we’d either head off to read some more or take a nap. This is when I’d usually find my way to the gym (if I hadn’t drank to much), up to the deck to read some more, or off to the courts to play some bball.

Then we’d be off to the formal dinner palace, where we’d dress up, and be served by some really good service. It was really a treat to get the service, and the great food from the restaurant, and is always fun to dress up. The New York Cheese Cake was my favorite and most desired dessert I picked. Had it almost every night.

After this, at 9:30, we’d head off to the theater to take in the evenings entertainment. Generally it was really good. I’m a bummer sometimes, and just want to read my book, but my folks loved it. I cant believe those people up there could do what they were doing, with the boat rocking as it was. Magic Tricks, comedy acts, vegas show girls, and swinging circus acts were all involved in the entertainment.

Following this, I got into the habit of going to a 24hr lounge, and ordering some won ton soup, which hit the spot completely. Around this time, it was bed time, completing a full day of life on board a cruise ship. 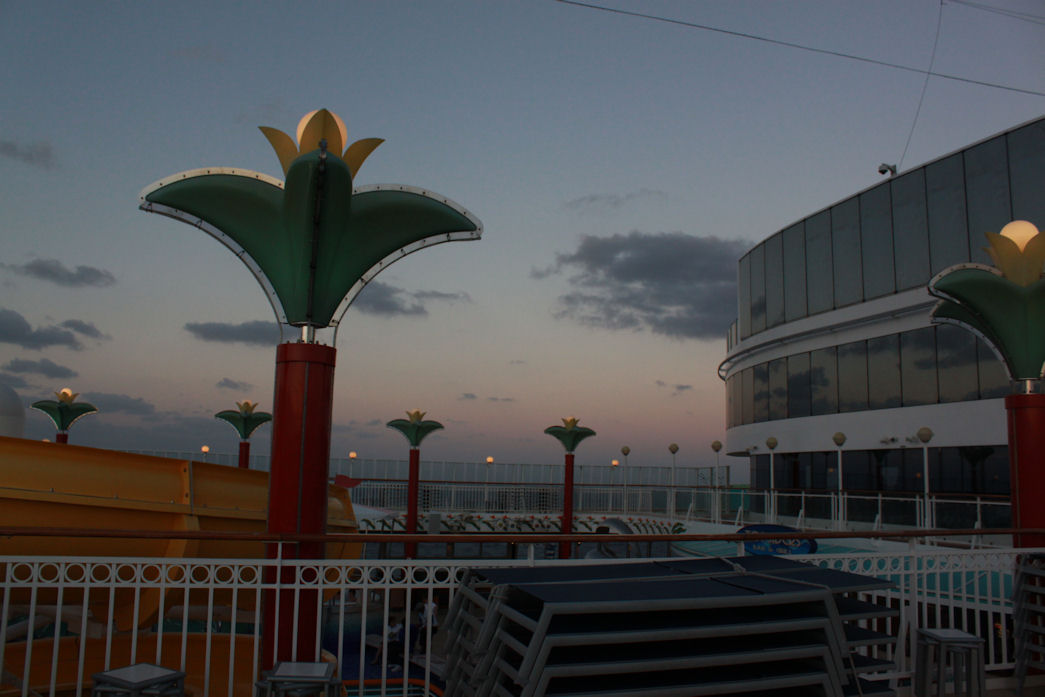 My folks are talking how their going to be staying in Miami Beach tomorrow, kinda makes me jealous, but I realize that my time has come, and my adventure must end. Back tomorrow off to Olympic bit Vancouver, to hit the books for another few months of happyness?!

Time to get back on track with some help from Exercise and Mind . Get my focus on, get my exercise habits back, and get my love returning for all things necessary. Its always been there I guess, but I always find its hard to focus again.

Hopefully this pending cold goes away, and its just the long day I spent in the sun getting its best of me. I’m happy we managed to get away on a cruise, my first experience on one, and I highly suggest it for people who are looking to relax and explore new lands conveniently. Let me know if you have any other experiences on your cruise you’d like to share!