I had no idea that Vancouver was into branding their neighborhoods one at a time, but it appears that is the case. In the past, they’ve gone from Gastown, Yaletown, Main Street, South Granville, Granville Island, Commercial Drive, (etc.) and now we have a new area, it’s called the East Village. 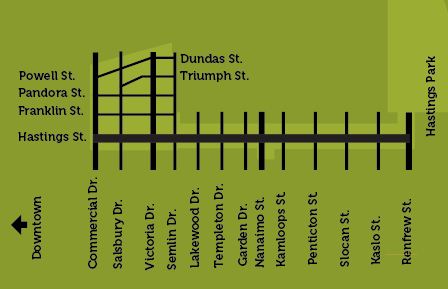 I like the name, as it resonates a time I’ve read about of the 60’s in New York’s East Village (next to Greenwich Village) in Lower Manhattan where all of my favorite music legends spent time creating.

I like how it’s creative, it’s not afraid to be crooked, and it’s got lots of character.

Yes, they have plenty of things there for somebody to sustain life.. dining, produce & groceries, community services, and much more.

I enjoy this part of town for the culture it has, I feel something there… but that could just be the hipsters omnipresent glare, but perhaps, just maybe it’s a feeling of ‘artsy’ that it has. How do you feel about it?