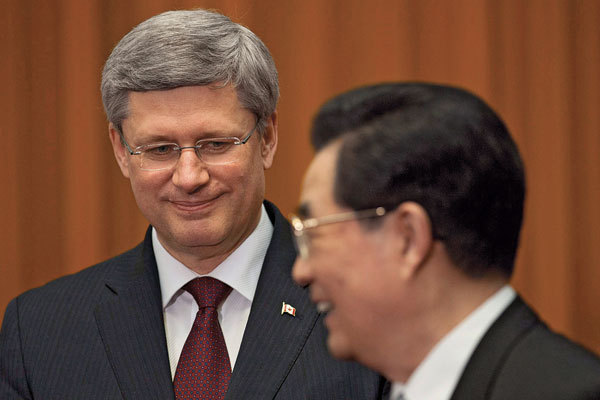 In just 1 week, over 50,000 people have joined our campaign with Leadnow.ca to stop the NEXEN buy-out and secretive Canada-China Foreign Investment Protection Agreement (FIPA).

FIPA would give foreign corporations sweeping powers to sue Canadian governments for implementing common-sense environmental protections, investing in Canadian jobs, or for stopping the proposed Enbridge Northern Gateway pipeline and other projects like it. And worse, these lawsuits would happen in secret tribunals outside Canadian legal channels.

Last week, few Canadians knew about this deal, and now thanks to you momentum is building fast to stop this deal in its tracks. But with the deal set to pass automatically late next week without a single vote or debate in Parliament, we urgently need your help to turn up the media spotlight on this secretive trade agreement.

Let’s ramp up the pressure on this government by sending letters to the editor to our local papers about this secretive and extreme trade deal. Click here to find everything you need to get started.

Thanks to you, elected officials and members of parliament across the country are starting to get the message that this is an issue that Canadians care about and that can’t be ignored. The Green party is rallying support to stop the deal and the NDP will put a motion forward today calling for the Canada-China FIPA to be studied and debated in the House.

The media silence on the most sweeping trade agreement in a generation has been astonishing. But this issue is finally starting to break into national media. Now, we need major media coverage to make sure Canadians know what Prime Minister Harper is doing, and to buy time to challenge and stop this deal for good.

Writing a letter to the editor of your local newspaper is the most powerful thing that you can do right now. Editors will see the attention and tell journalists to cover the story, our MPs — who pay close attention to their name showing up in the media — will take note, and we can reach millions of Canadians if we all write a letter to the editor for our local paper now.

We’ve turned up the heat on Parliament Hill at a key moment and MPs are working to delay the treaty’s passage — But the FIPA could still pass in just one week.

We need to make sure that more Canadians hear about this story so we can stop it in its tracks. Let’s blanket Canadian papers with messages that Canadians will see and that MPs can’t ignore.

It just takes a few minutes to write a letter to your local newspaper editor, and we’ve put together a step-by-step guide to make it even easier. Click here to learn how — We’ve got everything you need to make it easy, including talking points for you to use.

Thanks for all you do,

Emma, Jamie, Maggie, Matthew and the rest of us

P.S. Look at the mainstream coverage our campaign is getting in the Globe and Mail this week. Now let’s make sure we get more.