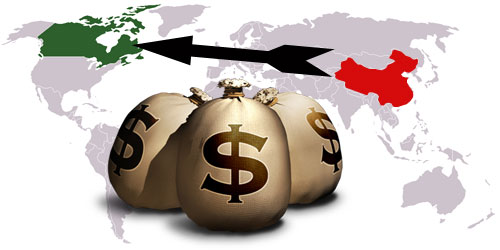 Thank you for taking the time to share your concerns with Peter Julian over the Canada-China Foreign Investment Promotion and Protection Agreement (FIPA) as well as your opposition to the Nexen takeover bid by China National Offshore Oil Corporation (CNOOC).

Thank you for being so many voicing your concerns on these deals! Please know that the New Democrats are actively opposing both of these deals.

On the CNOOC takeover bid of Nexen, we regret that our call for a thorough, transparent, and public review of this $15.1 billion transaction is being ignored. Now that there has been a 30-day extension, we believe that the Conservatives must use this time to consult with Canadians.

Concerned Canadian citizens, workers, business representatives and economists, and all are concerned about the impact of the sale of a significant Canadian energy company to foreign interests. A recent Abacus survey reveals that over 60% of Canadians are against this $15.1 billion transaction.

For Peter, it’s also unclear how Canada’s environmental standards will be enforced. “There are still many unanswered questions and it’s the Conservatives’ job to respond to these questions before selling out our resources to the highest bidder,” said NDP Energy and Natural Resources critic Peter Julian.

Once again the governing Conservatives are putting the interests of investors before the legitimate concerns of our citizens, experts, and business people. Further, the recent allegations of insider trading raised by the U.S. Security and Exchange Commission (SEC) highlights the importance of public scrutiny.

“I would hope that the Industry Minister uses these additional days to consult with experts, business people and workers who are concerned about the impacts of this transaction,” said Industry critic Hélène LeBlanc. “This is a critical sector of our economy and Canadians have the right to know what they’re getting into.”

Foreign investments are crucial for reinforcing our economy, but we must ensure that these investments are not made at the cost of human rights, labour standards, quality jobs and the sustainable development of our natural resources.

You can read more by following these links:

Thank you also for taking the time to share your concerns over the Canada-China Foreign Investment Promotion and Protection Agreement (FIPA). I agree that this agreement raises serious concerns and deserves a thorough public debate.

The Canada-China FIPA provides an excellent example of why the NDP has long fought for a better, more open fair trade policy.  This FIPA lacks the level of transparency and openness that Canadians deserve. And, once again, the Harper government has signed an agreement against the best interests of Canadians.

Among other things, this agreement exposes taxpayers to costly legal challenges via unaccountable tribunals that do not reflect acceptable standards of the rule of law. The dispute tribunals may conduct hearings in private at the mere request of one party. The pact does not guarantee Canadian investors full reciprocity with the rights that Chinese investors have secured and has a clause binding Canada for a period of 31 years. These are just some of the many concerns raised by this agreement.

While pursuing mutually beneficial economic relations with China is a positive goal for Canada, we must ensure that any investment or trade agreement we sign meets the standards Canadians want and deserve.

Alarmingly, the Conservatives have refused to send this agreement to Committee, where it could be studied in detail and where we could invite the input of stakeholders of all types.

As Official Opposition NDP International Trade Critic, Don Davies has taken the lead in challenging the Conservative government on this FIPA deal. Don has been raising this issue in Question Period. (The following video features him asking the Minister of International Trade why his government has failed Canadians:
http://www.dondavies.ca/don-davies-highlights-conservative-incompetence-on-the-china-fipa

The Official Opposition has called on the government to have a public debate on this issue. As Vice-Chair of the International Trade Committee, Don has moved motions at the Standing Committee on International Trade calling for the FIPA to be studied and opened to public input.

We are asking for your help in making this happen. Please write the Conservative members of the International Trade committee and ask them to join the call for postponing ratification and support the motion to study the treaty.

Don’s latest motion will be debated today, Thursday, October 25. To read his motion in full and to see other actions the NDP has taken on the FIPA issue, click here: http://www.dondavies.ca/canada-china-fipa

WHAT CAN YOU DO?

Write to the Conservative MP’s who are members of The Standing Committee on International Trade and urge them to support the motion:

Also, write to Hon. Ed Fast, Minister of International Trade to demand that he postpone the implementation of the Agreement until there has been a proper study and input from Canadians ed.fast@parl.gc.ca PLEASE NOTE You can write to the Minister, Ed Fast, right up until midnight of October 31 to ask him to postpone implementation until after a proper study.

“BE IT RESOLVED THAT the NDP continue advocating the renegotiation of NAFTA to remove Chapter 11, which enables foreign investors to directly sue governments over public policies.

BE IT FURTHER RESOLVED THAT the NDP advocate amending trade deals to ensure that labour rights are subject to an enforcement mechanism at least as strong as investor rights.

BE IT FURTHER RESOLVED THAT the NDP call for the application of countervailing import tariffs equal to the cost advantage gained by a foreign producer through violations of labour rights and/or environmental standards.” (NDP Federal Council Motion-adopted Oct. 2, 2010)

Going forward, we will continue to speak out against any trade deal that is unfair, negotiated in secret, and would contain grave conditions relating to labour standards, human rights and the environment.

Thank you again for taking the time to share your concerns with Peter Julian on this important issue.

Please stay in touch on this or any other issue.

P Help save paper – do you need to print this email?

Optimism is better than despair. So let us be loving, hopeful and optimistic. And we’ll change the world.”