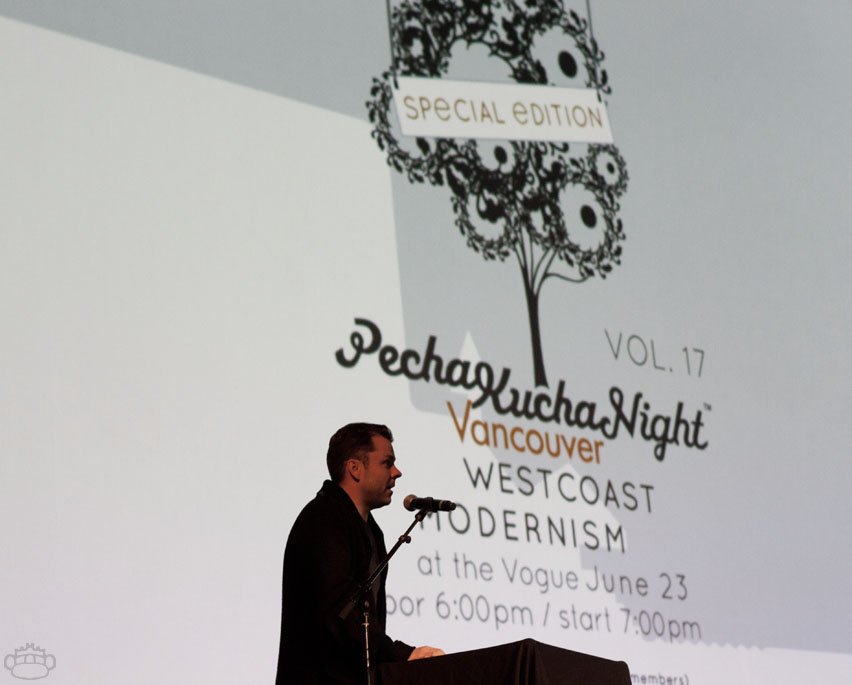 Taken directly from Pecha Kucha Night Vancouver‘s website: “Each presenter is allowed 20 images, each shown for 20 seconds each – giving 6 minutes 40 seconds of fame.”

Pecha Kucha is an event held in cities across the globe. You can see in the image below by the blue dots on the map how global it really is. 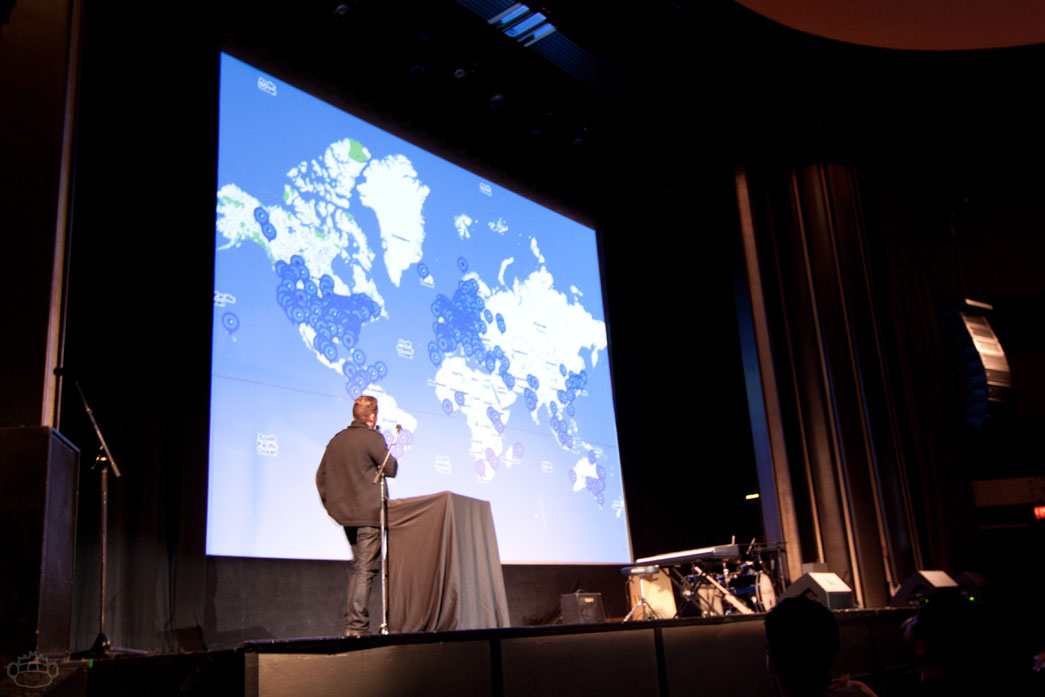 On April the 28, 2011 they hosted their 16th edition of PKN at the Vogue Theater in downtown Vancouver BC. 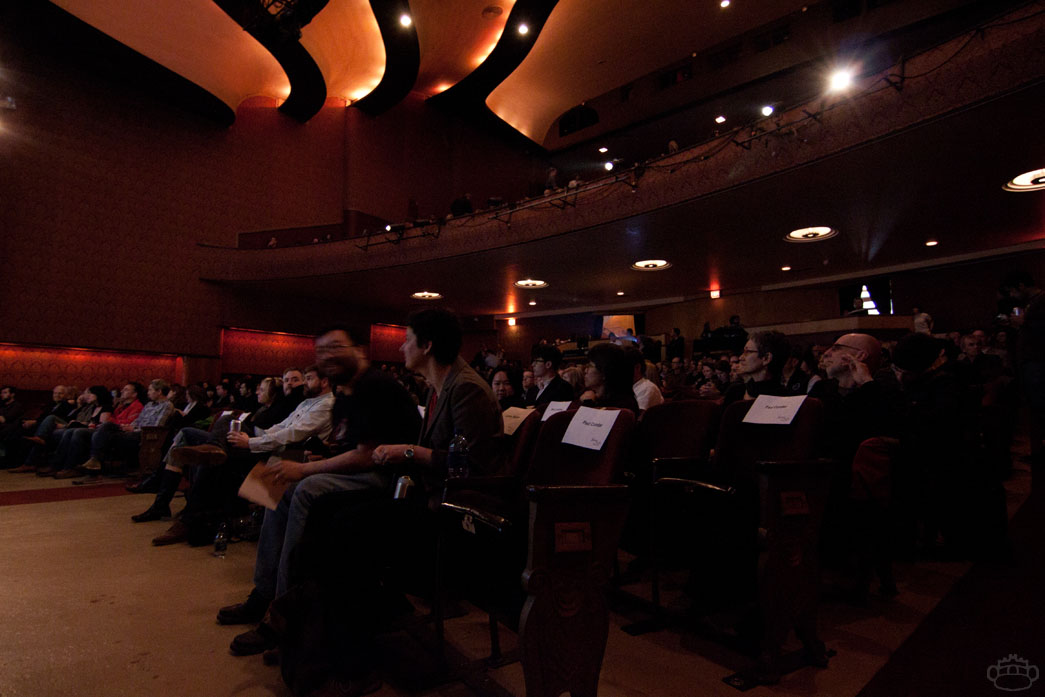 The event is hosted by Steven Cox , aka the Pecha Kucha guy (his words), who is in the photograph at the top of the page emcee’ing the evening. 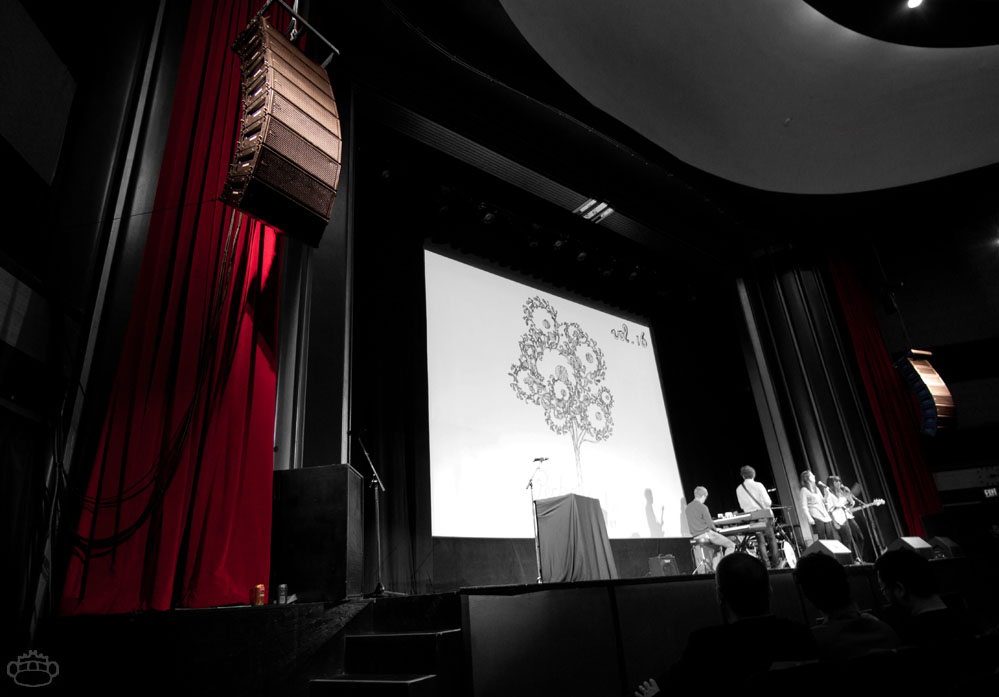 The night started off with a band of whose name I did not catch, but played like seasoned veterans. Everybody seemed to be tapping their feet with me. 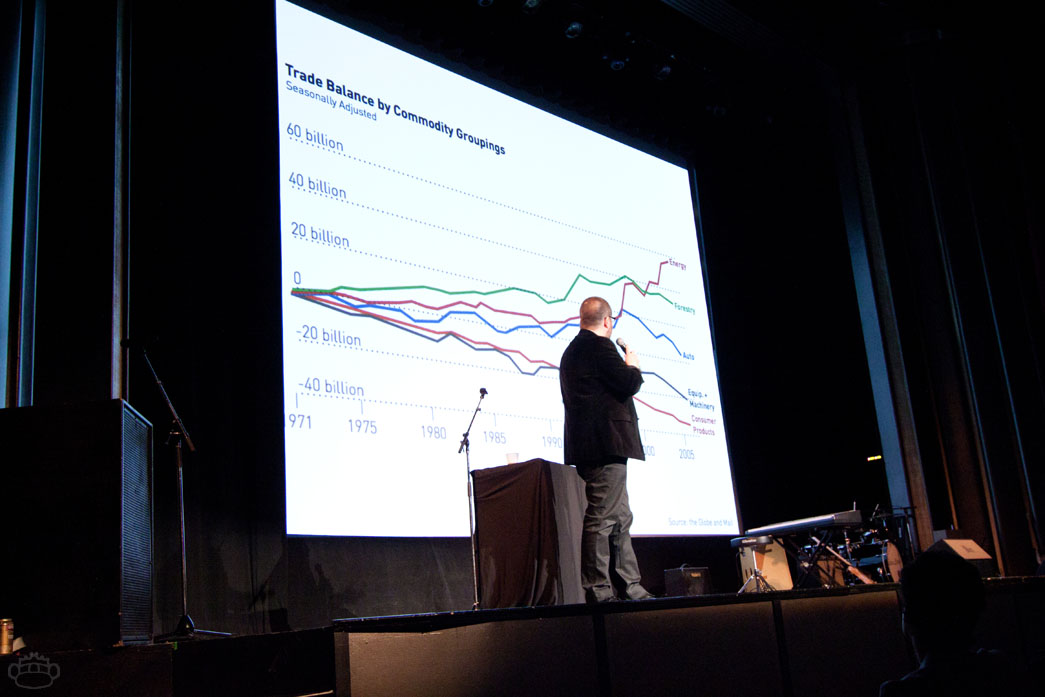 Paul Conder  illuminated his thoughts on design. He made some very interesting predictions on the future of the industry, and a rather nostalgic overview of where we have come as a society consuming. 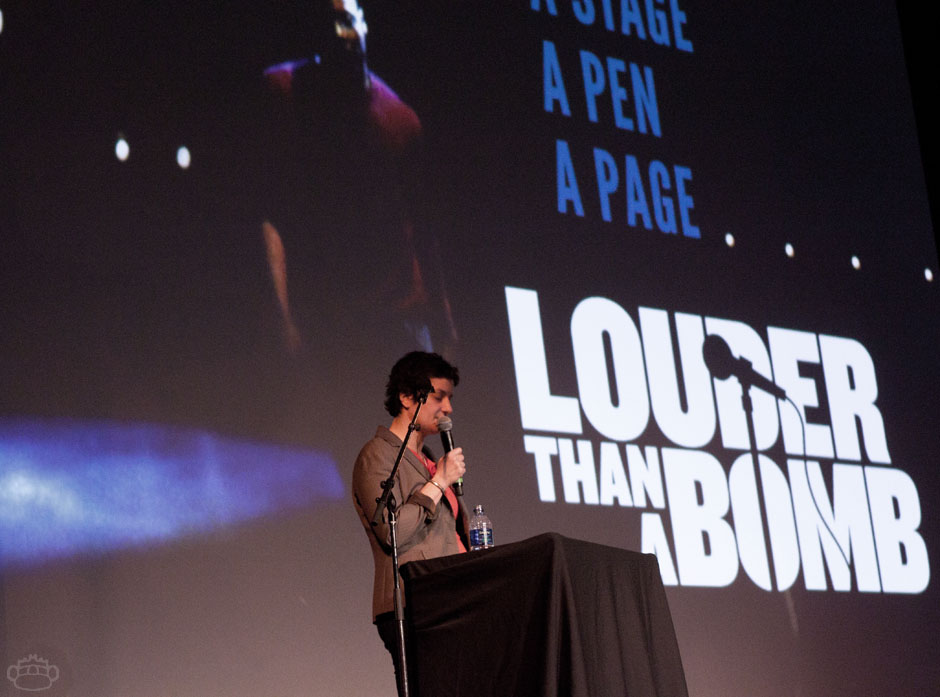 Lauren Weisler gave us an overview of her work at DOXA Film Festival. We learned that DOXA is a Vancouver based non-profit, charitable society devoted to presenting independent and innovative documentaries to Vancouver audiences. We also learned the scope of talent to which the audience of the festivals will be introduced to.

Joseph Wu had a great presentation on his art: Origami! I really enjoyed seeing the capacity at which art can be taken to. It’s simply brilliant seeing how much effort an artist puts into their craft, sometimes one can forget this. 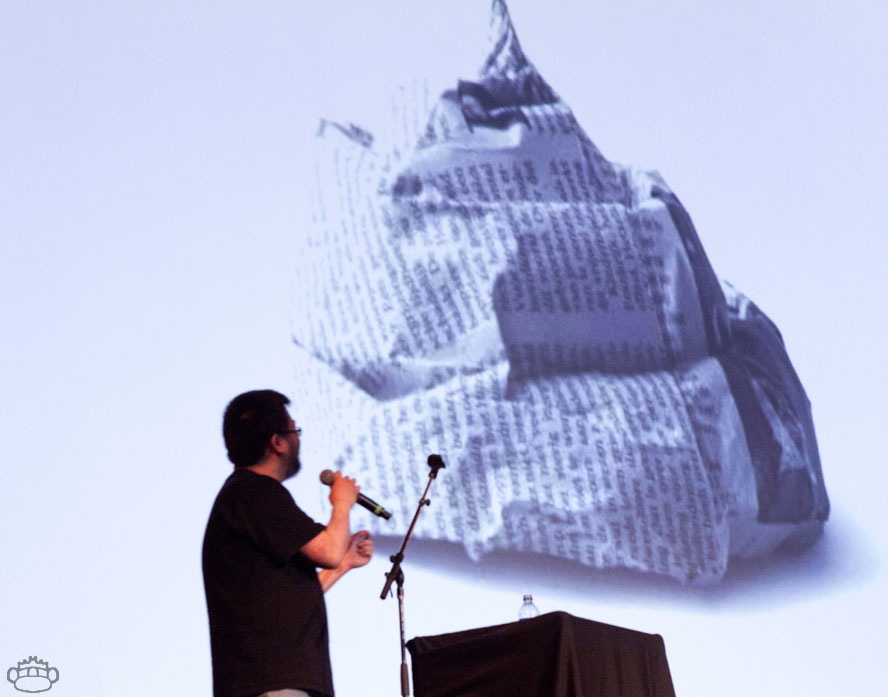 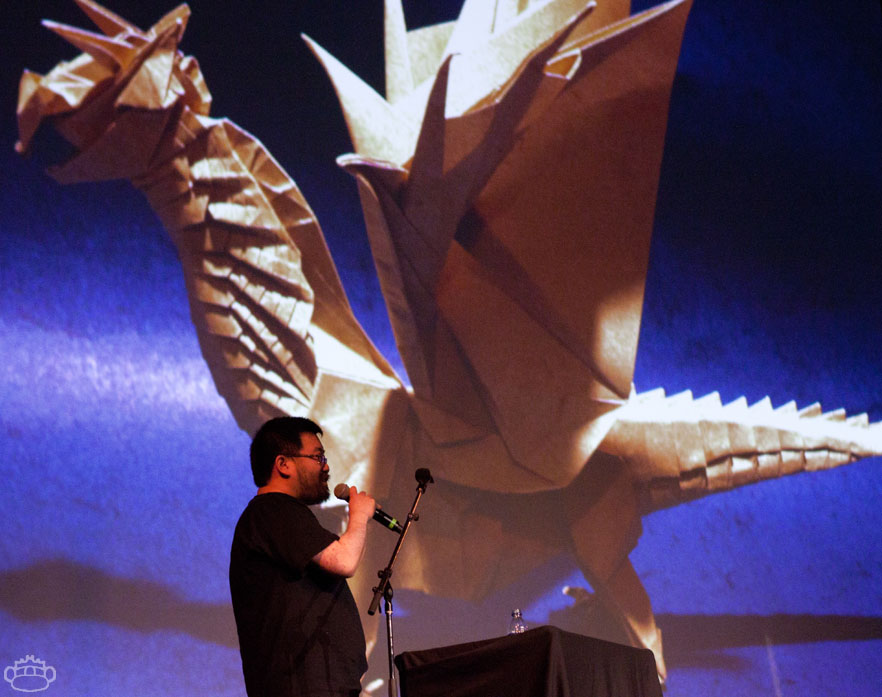 Joseph was clearly a fellow that is extremely passionate about what he does. I watched him before the show reforming a bird he had riding in his pocket; a true artist. 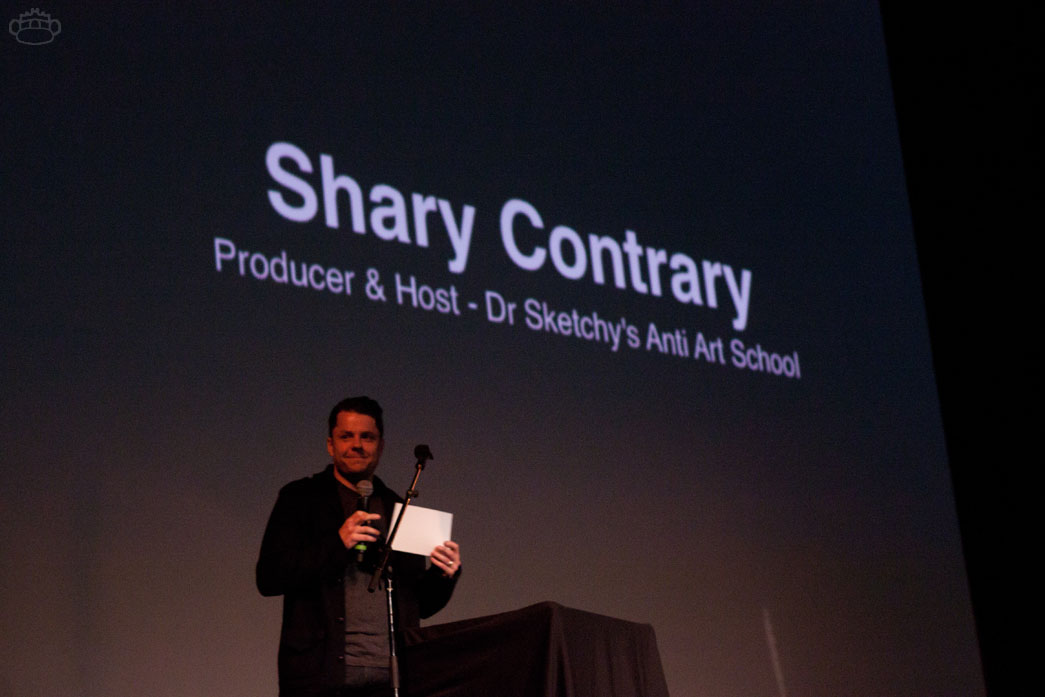 Shary Contrary had a very exciting presentation about her work with Dr. Sketchy of Vancouver. What is it? A traveling sketching circus of sorts I would say.. Maybe Shary would agree..

Darrell Kopke had a motivating speech, with more of a world conscience breadth. He represented institute B: “skool, but different.” 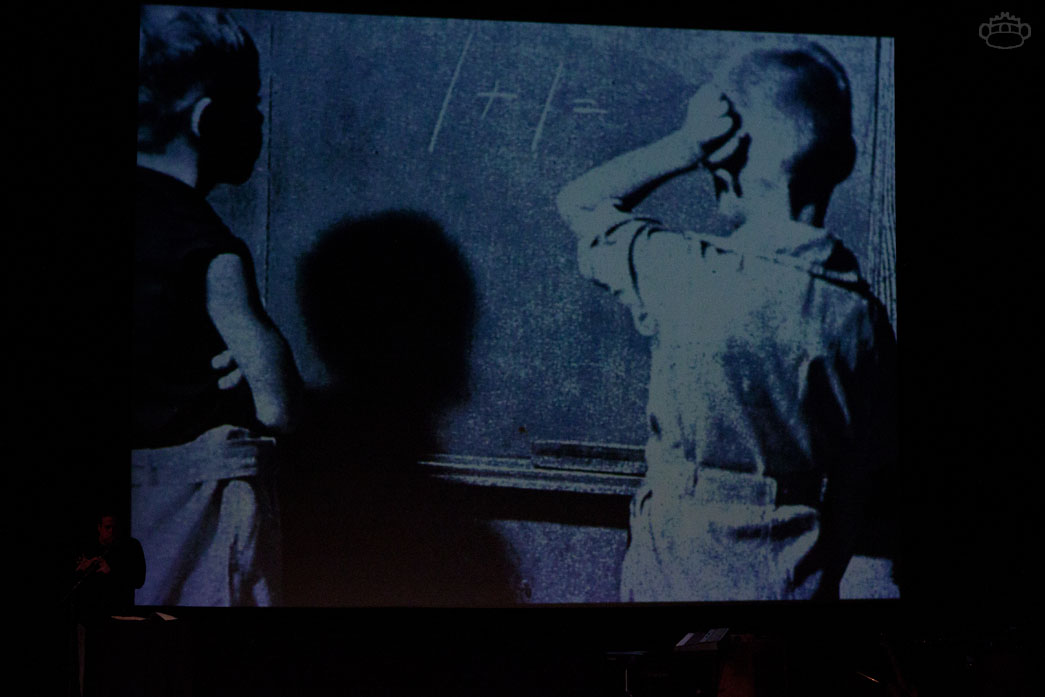 I liked his attitude, his vigor, his enthusiasm, as well as his strong images that spoke with simplicity. Browsing the institutes website makes sense when I reflect on the presentation. 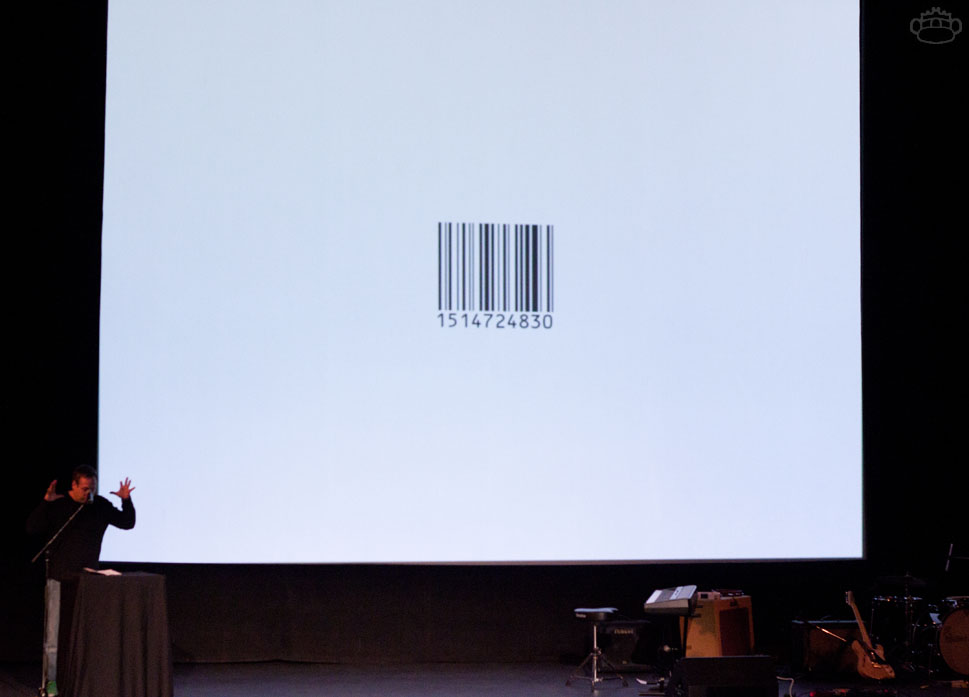 Michelle Rizzaro & Trevor Fleming had a humbling presentation on growth, future, trying, and expression. They represented Lifetime Collective, a clothing line and what would appear to be a culture as well. To be honest, looking at their slide it really does feel like Vancouver to me. I have never thought that Vancouver has a feel to it, but I’m starting to get to know it.

Sean Heather, the man behind Vancouver’s Irish Heather, Salty Tongue Cafe, Salt Tasting Room, Everything Cafe, Shebeen Whiskey House,  has informed me that the piper that came on stage was a representative from the BC Regiment’s Irish Pipe Band, not a Scottish bagpiper at all (which I had thought). This is evident by the saffron kilt, bottle green tunic and “Caubeen” cap (he taught me that). 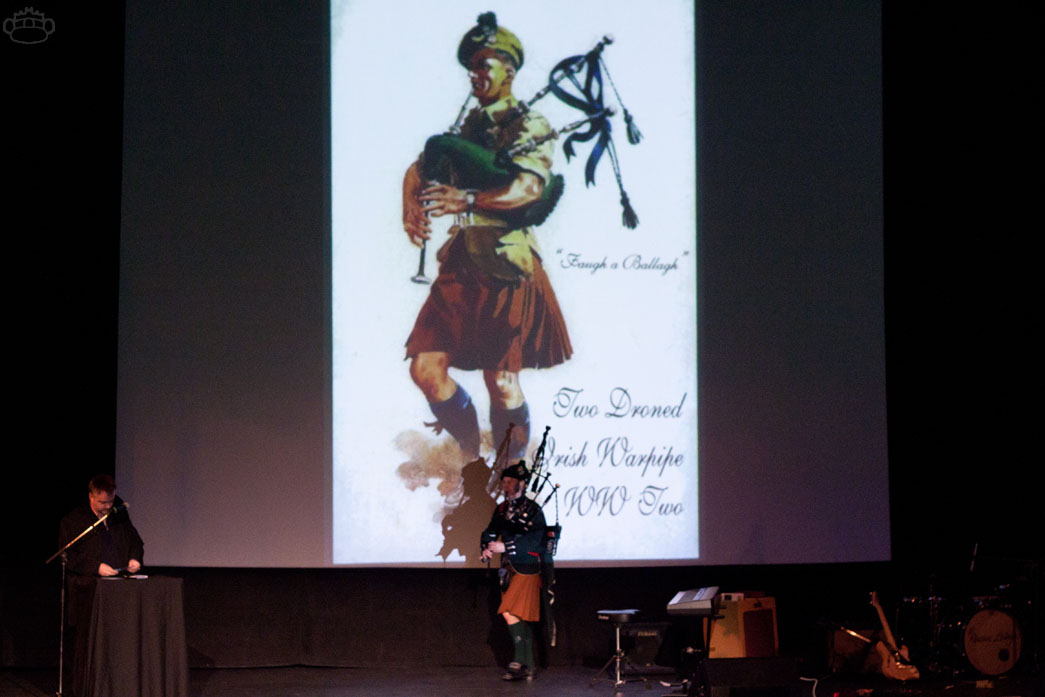 I really enjoyed Sean’s presentation for it inspired me to become a much better part of the community, explore my culture, or go even further and create my culture.

Sean brought us through his journey in the Vancouver community, giving us a little taste of his culture and what he appreciates doing and having in his life. It was very clear to me that he enjoyed every bit of life, of course drinking a pint of Guinness while doing it. 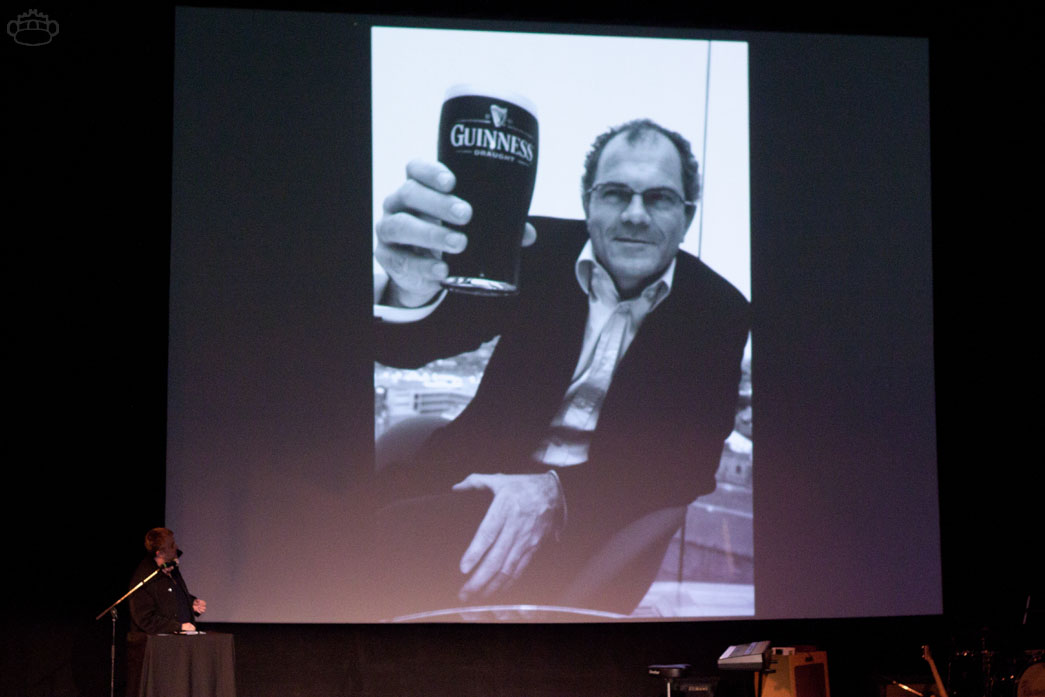 Apparently brewmaster Fergal Murray of Guinness cut the ribbon when the Irish Heather moved locations; yes, Sean Heather has that much influence.

He closed his presentation off with a drinking ballad. He was singing a cappella to a sold out Venue Theater. It was definitely an exciting presentation. 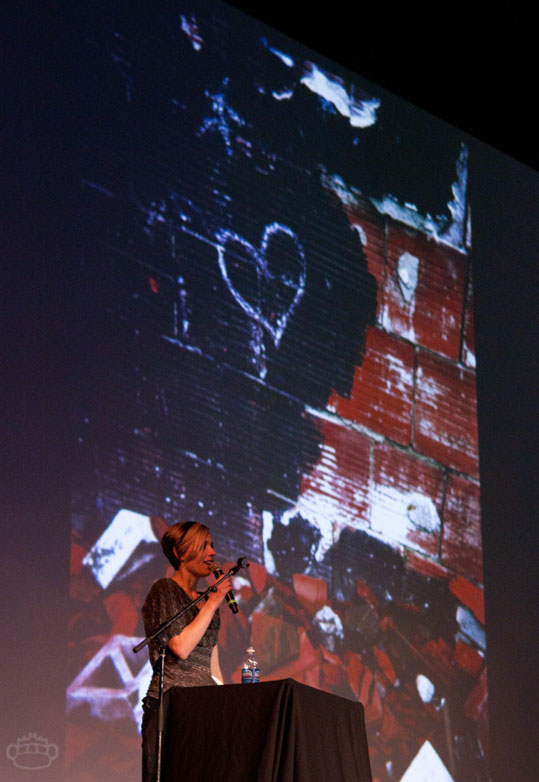 Katrina Pacey had another very local story to tell. She talked of her work with Pivot Legal, an organization with a motto: “Equality lifts everyone.”  She talked of some of her experiences she’s had on her journey to becoming one of Vancouver’s greatest human rights assets. 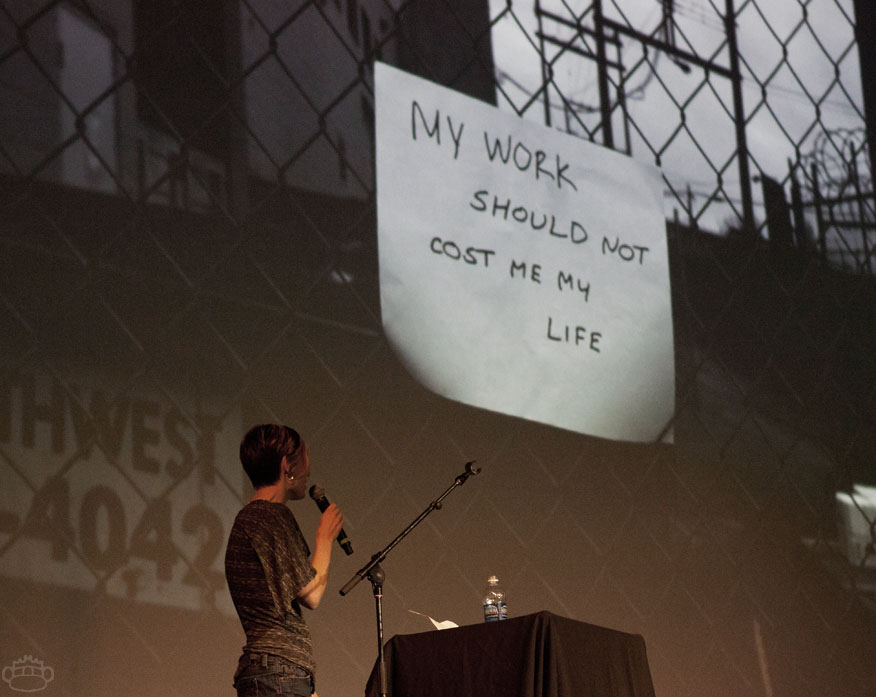 I think after Sean Heather’s story, when Katrina opened with her line about her work, how she fights to protect the rights of sex workers, it really took many people by surprise and got their attention. She challenged her stance by asking herself the question: “What would I do if my own daughter grew up to work in the sex industry?”

Myriam LaRoche was a very fascinating woman. She discussed with us how she has transformed herself from being a girl carrying a few dozen bags with new shoes in each, to a second hand store thrifter with a keen sense and eye for fashion. Her passion for what she does, like most of the presenters, was very evident. 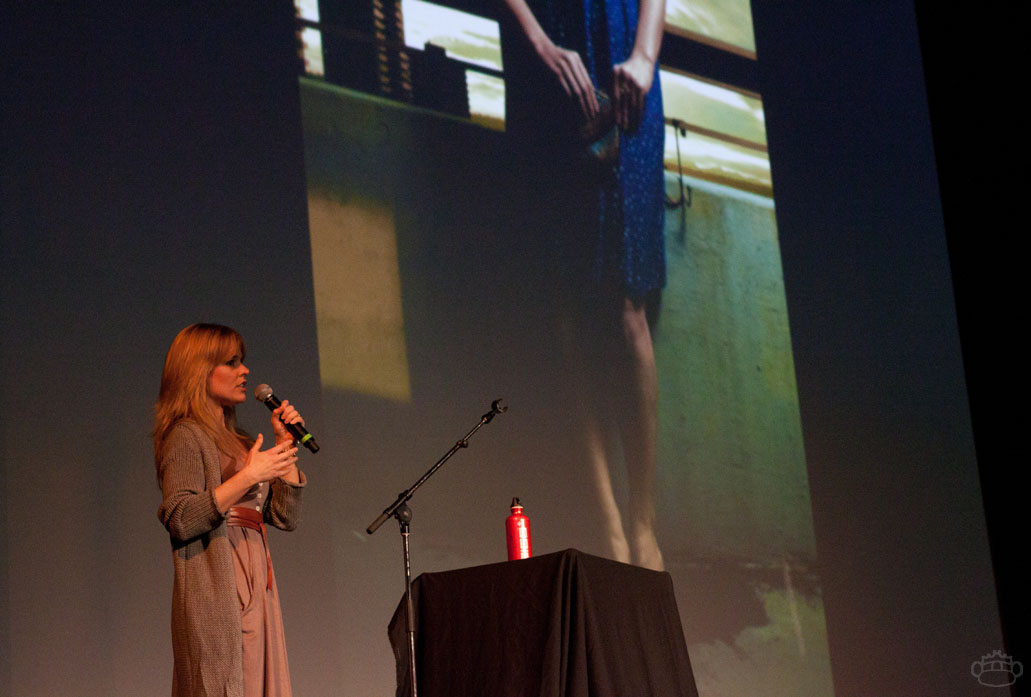 I found that the mix of presenters were very interesting array. Some fairly wild, and others very rooted and earthly. Steven Hill was the next presented who explained Leaky Heaven Circus, a theater production he produces. Their mandate reads: “Leaky Heaven is a contingent formation of artists/collaborators who play with expectations in a variety of performance genres.” 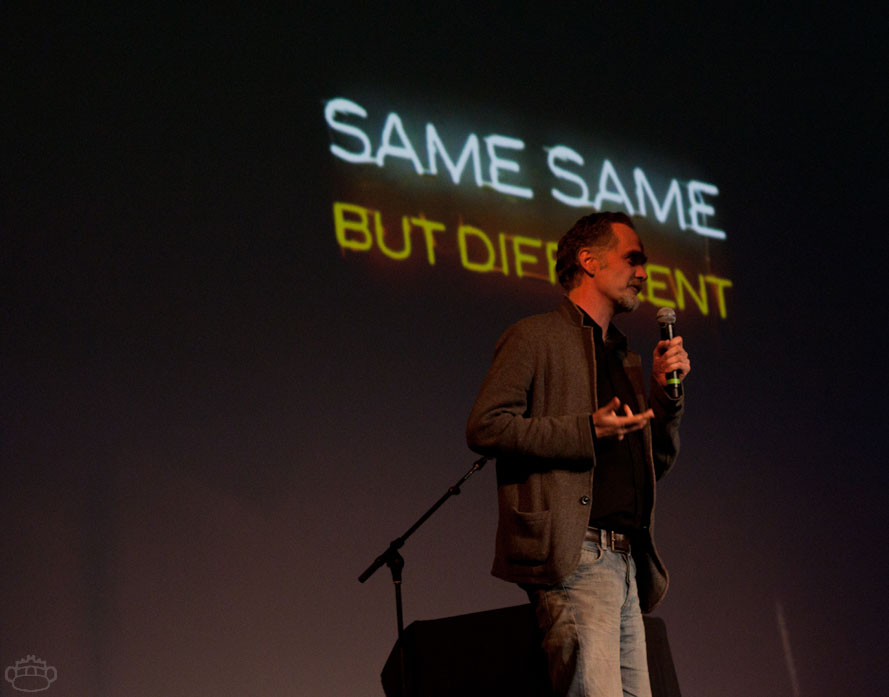 He was a very charismatic presenter.

Carson Ting speech intrigued me because of how his work paralleled my own. 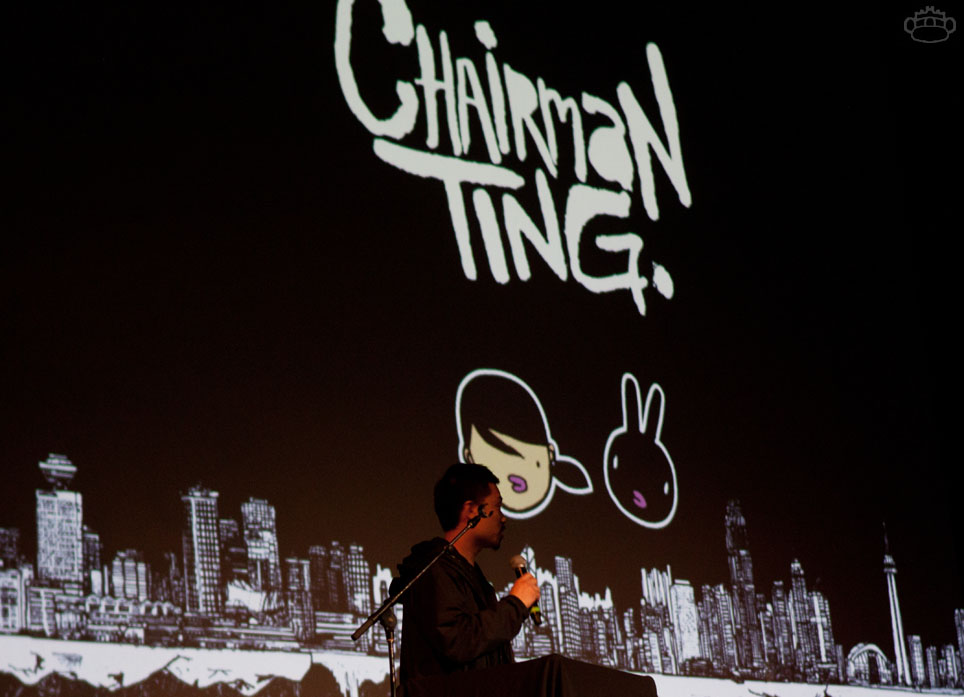 He is responsible for some very interesting projects based out of Vancouver but reaching throughout the globe. No doubt the world will see many of his works in the near future, which will clearly create an interesting future for us all.

Carson talked about his belief that transparency in anyones work, whether they be the president, an artist, a bus driver, or a school teacher, is essential and will benefit everybody who is touched by it. 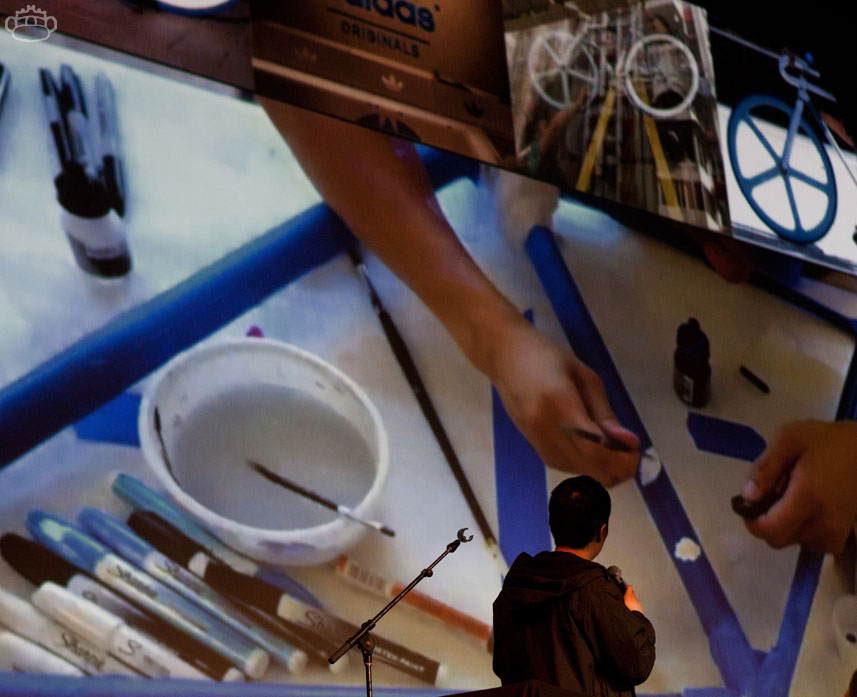 I really enjoyed learning how he has created art within his art. He talked about how the process of creating art is art in itself, which was part and parcel to transparency.

Samantha Jo Simmons is another advocate to culture in Vancouver. She is the creative director of Public Dreams, a creative culture for communities. Directly from their website: “Public Dreams promotes community participation in the arts by providing interactive and accessible public art programming.  We produce events, rituals, and traditions that promote healthy and vibrant neighbourhoods.” 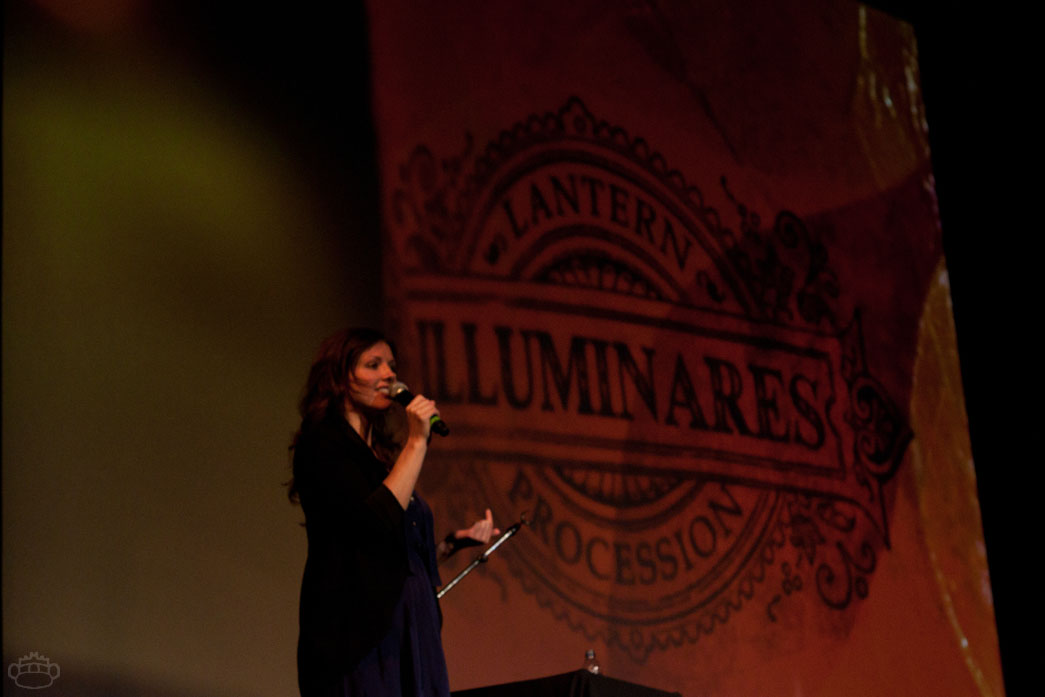 This kind of made me think of flash mobs when she talked of the organizations past and future projects, telling us about the participation turnout they get. Did she really say 2500 people they expect at their next event? It amazes me the things Vancouver puts on that I have yet to experience. 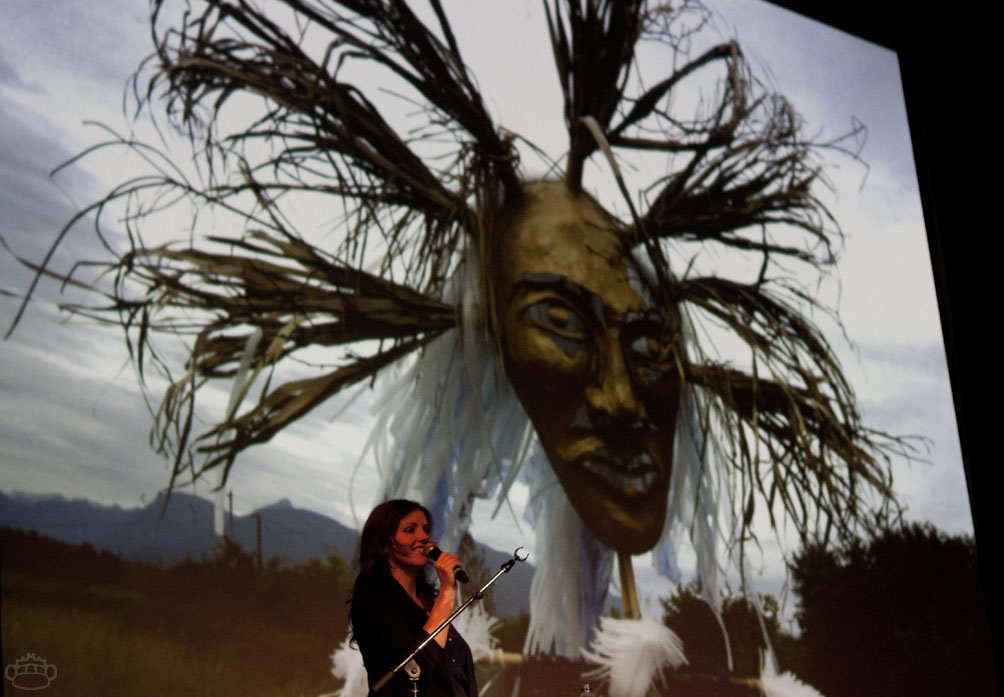 The final presenter of the night was Kahlil Ashanti. 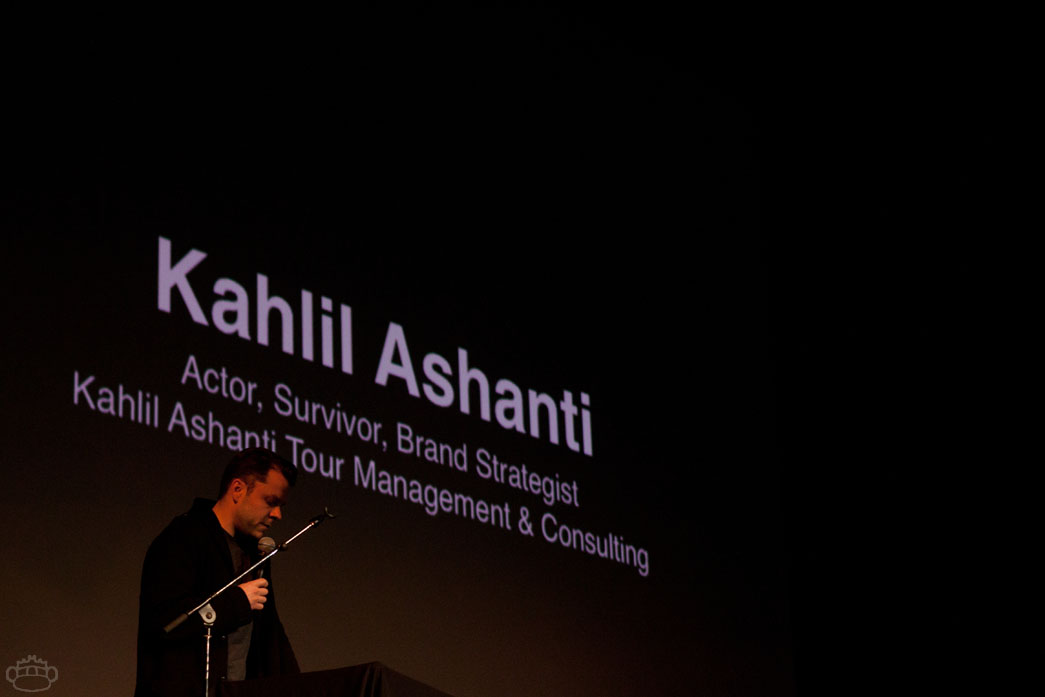 His message was of strength, love, support and leadership. Kahlil talked to us of his life, and the journey he’s been through. He is the man behind Basic Training, a comedy tour, which is very successful throughout the world. 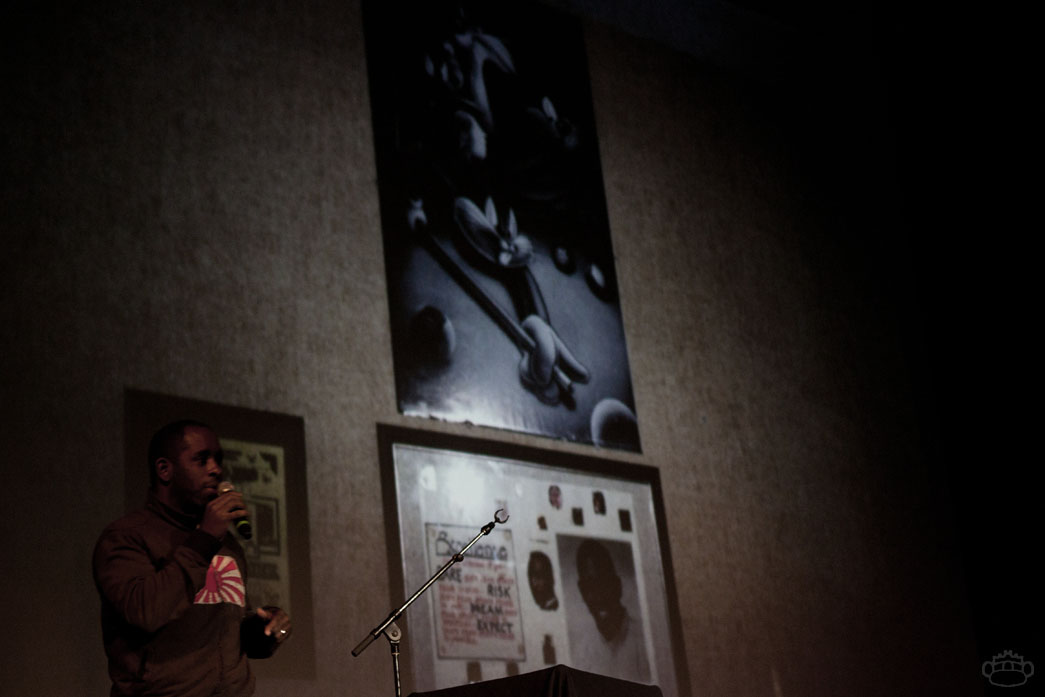 I really enjoyed his message, and it was a perfect way to close the night. His character was very charged, and it was easy to tell he is a very high energy, loving person, with a passion for every day he faces. 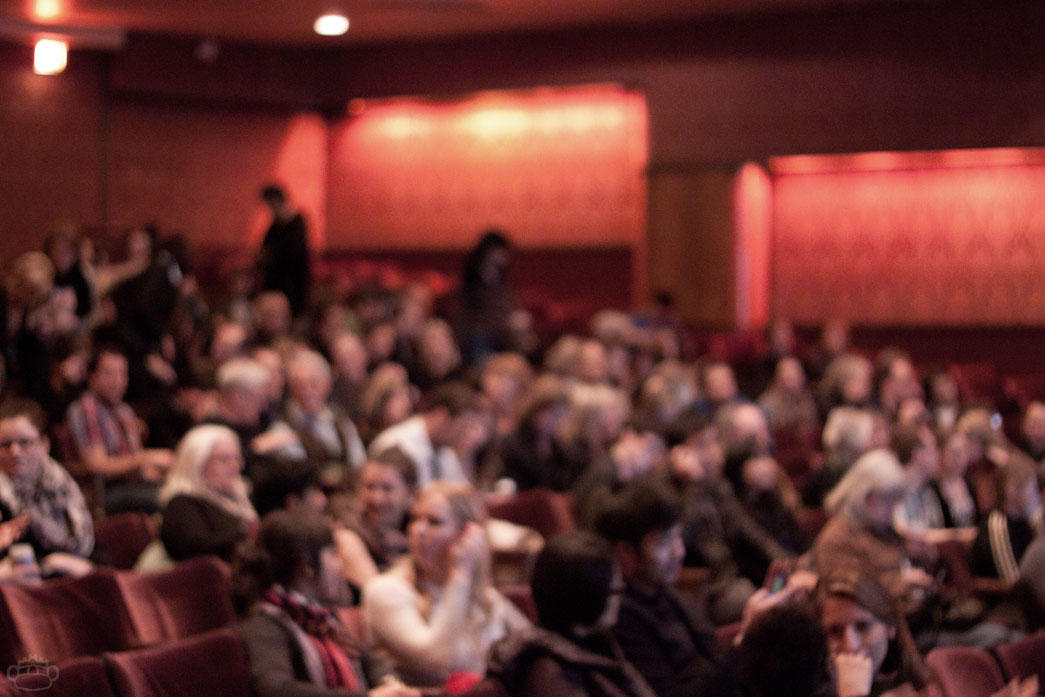 I am very excited to have had the chance to cover this event. Talking to some people after the show, there was some mal content with presenters just selling their product. This is understandable, for this, in theory, is what some were doing.

I was led to believe that this event represented grass roots change, inspiration, and a sense of instilled morality for all those who attended. I was only partly right. What I found was that Pecha Kucha #16  Vancouver represented a showcasing of peoples achievements, passions, and projects; which in themselves were all very inspirational. By no means was I disappointed with what I saw and heard, I was awakened to the raw truth of, well, society. I have learned that everybody takes something different from an event, it’s all the way you hold your ears. 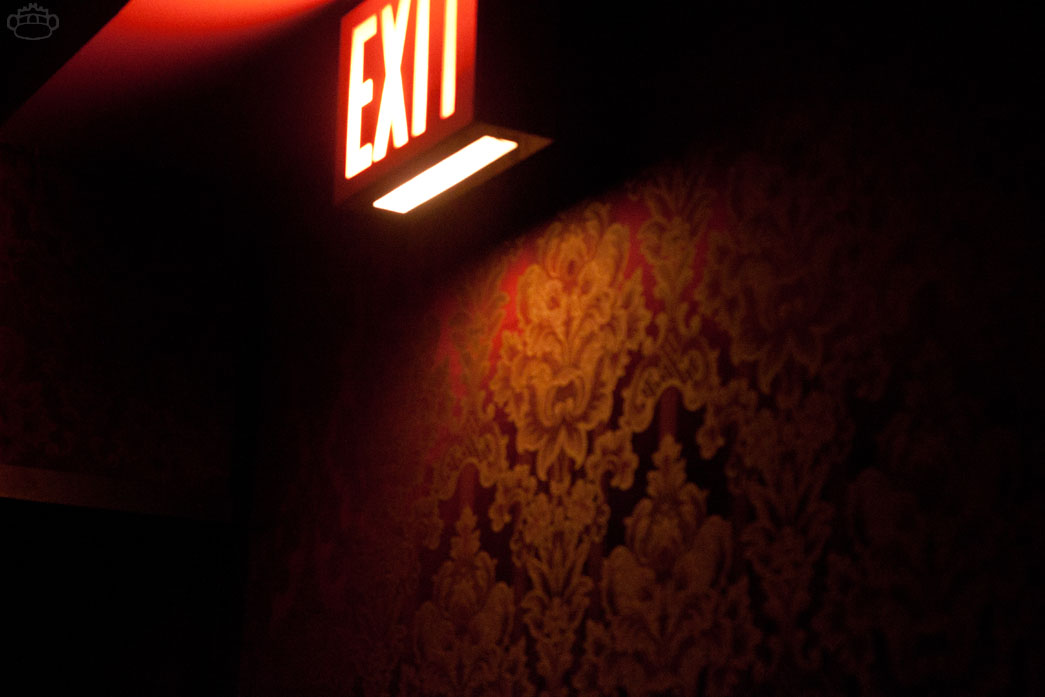 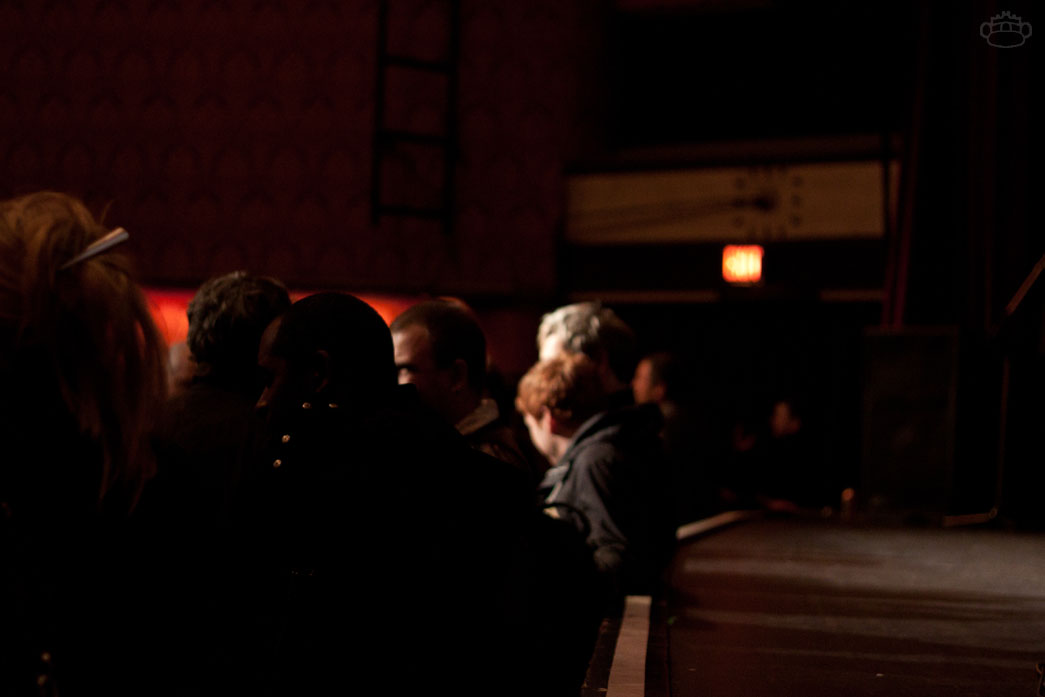 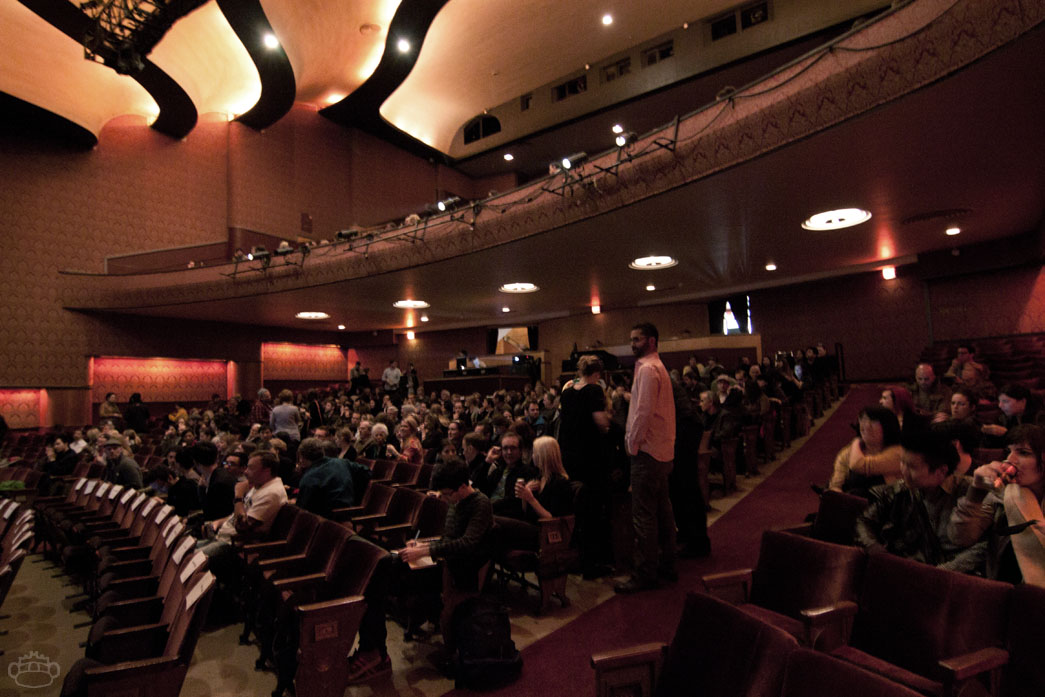 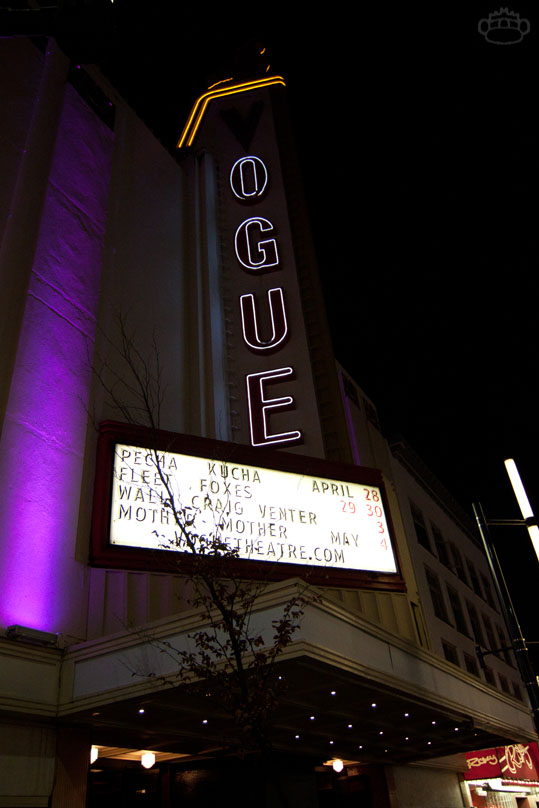 All photographs courtesy of Ned Tobin. The full set can be found on flickr.